Scenes from an (optional) morning skate: Halak starts vs Ducks, plus the lowdown on where Tyler Motte has been 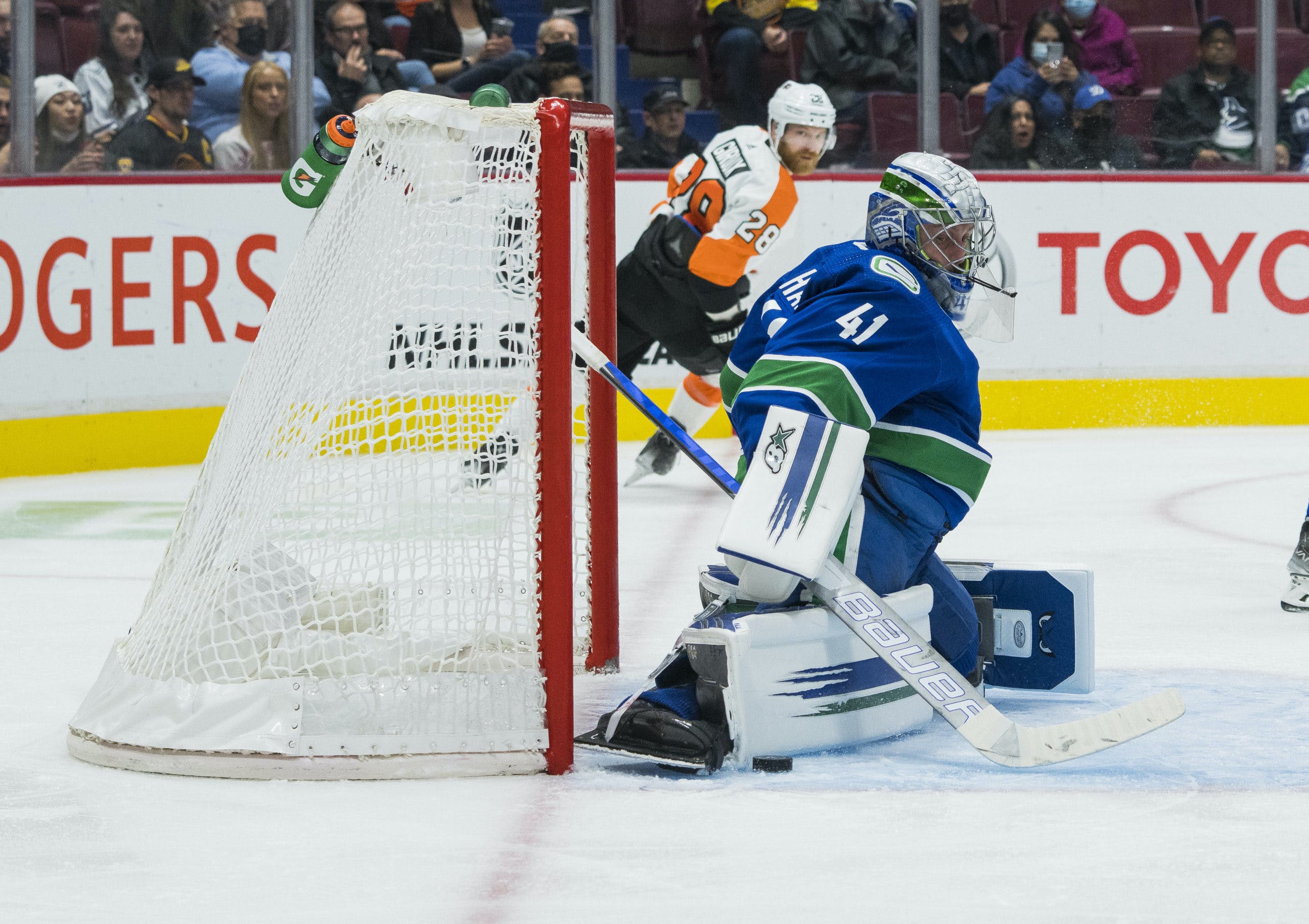 By David Quadrelli
1 year ago
Settle in folks, because today was an optional Vancouver Canucks morning skate ahead of their game against the Anaheim Ducks to close out their seven-game homestand.
If you’re new here, that means our game day “scenes from morning skate” article will be more of a musings piece than anything else.
But first things first. Here’s what we can tell you about the Canucks’ lineup tonight.
Expect the lines and power play units to remain unchanged from the Canucks’ Sunday night victory over the Dallas Stars.
The one change to the lineup is that Jaroslav Halak will get in the start in goal tonight instead of Thatcher Demko, who has already made ten starts this season.
Head coach Travis Green also confirmed that Luke Schenn — who we were told was day-to-day yesterday with a lower-body injury — is going to be out for a while longer. His injury is now being considered week-to-week.
But there’s one player whose injury and subsequent return has remained a bit of an enigma of sorts, and he’s the topic of today’s thinking-out-loud article.
Today, we’re talking about Tyler Motte.
More precisely, we’re talking about where the heck he’s been, what’s happened to him, and when the Canucks can expect to inject their best penalty killer back onto their 32nd-ranked penalty kill.
Let’s begin with what was ailing Motte this offseason.
On November 1st, Motte finally revealed the nature of his injury, pointing to a scar on his neck before explaining that he had a bulging disc in his neck that he’s been dealing with on and off for a couple of years. Hopefully, that’s now behind him for good.
November 1st also marked the first full practice of Motte’s season. All we were told then is he’s “getting closer”, and that messaging hasn’t changed since.
Now let’s examine Motte’s timeline before that.
Motte was at training camp, but did not skate with the Canucks’ main groups. Instead, he was a shooter for the goaltending drills. This served as a low-intensity way for Motte to begin to start doing hockey activities again while still being mindful of his recovery.
On October 5th, Motte was on the ice after Canucks practice had concluded and was getting some more high-intensity work in with skills coach Yogi Švejkovský. Again, the intensity was high, the heart rate was certainly close to what it would be in a game, but Motte was still limited to avoiding contact drills.
In fact, despite practicing with the team since November 1st, Motte still hasn’t taken part in many battle drills until very recently.
“Yeah, we are,” said Travis Green when asked if the club is intentionally bringing Motte along slowly and avoiding putting him in battle drills. “I think with an injury of his type it’s important to make sure he’s back — you know, it’s no secret, we need him back in our lineup, he’s a big part of our penalty kill, he’s a fast player, he’s a hungry player, and he’s a good player in the league — but we got to make sure we do it right.”
“He’s definitely taken the right steps and he’s feeling good. Yesterday we got him into some harder battle drills and some competitive drills, and that’s all positive signs.”
Green wouldn’t confirm if Motte will play tonight or if he’ll travel with the team on their upcoming three-game road trip, so I suppose we’re back to “wait and see™” mode.
A lack of a full morning skate means no line rushes which would give us a clearer picture of whether or not Motte is in the lineup tonight.
Regardless, one thing is for certain.
The Canucks’ penalty kill is struggling, and adding Motte to it is going to give them an instant boost.
Puck drop is at 7 PM from Rogers Arena tonight.
Uncategorized
Recent articles from David Quadrelli