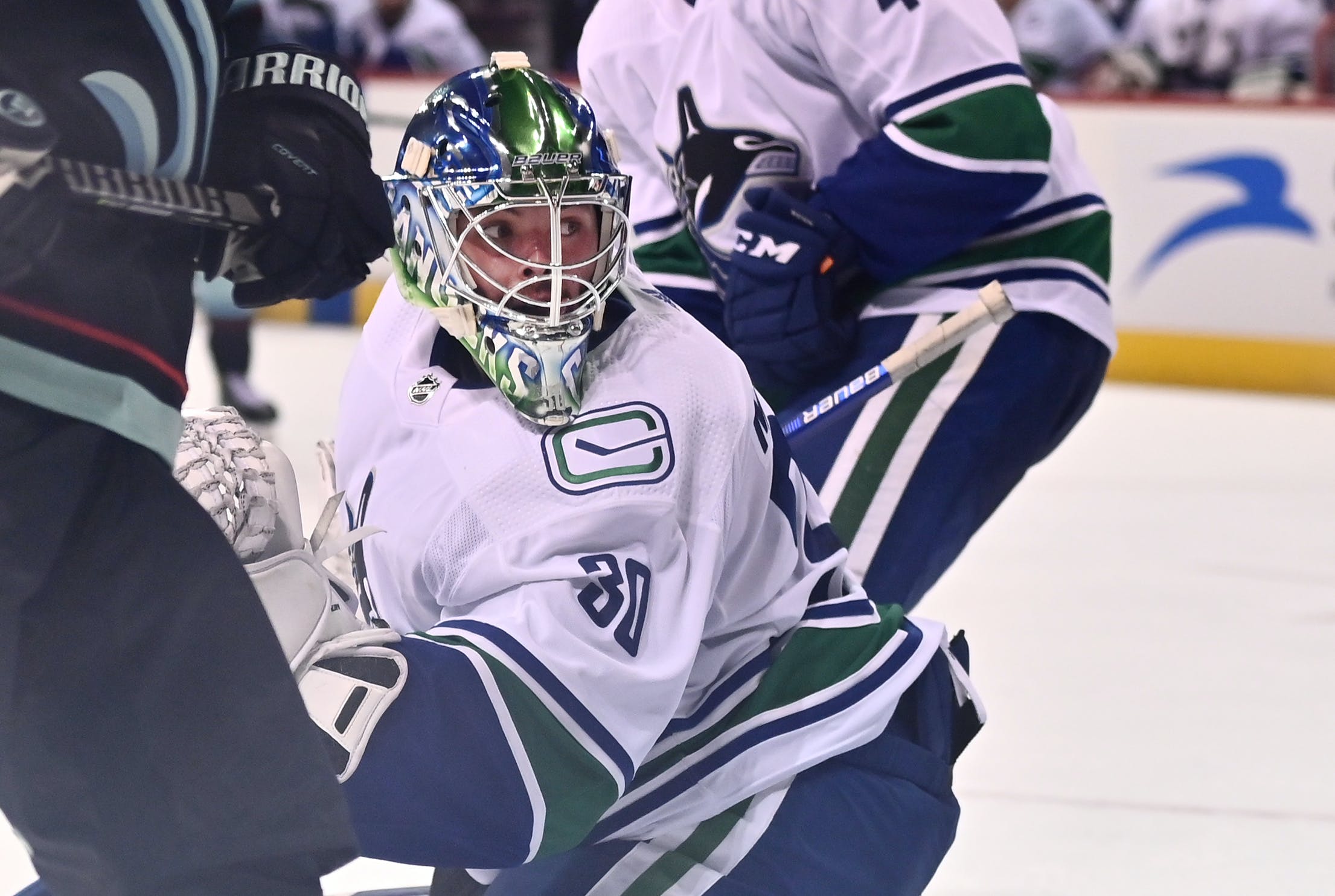 By Lachlan Irvine
1 year ago
After a month’s worth of games on the road, the Canucks are finally playing a hockey game on Rogers Arena ice again. And what better way to welcome back a home crowd than against the top team in the NHL?
Since their come-from-behind victory against the Columbus Blue Jackets on December 14, the Canucks have played nine straight games on the road, putting up a more than decent 5-3-1 record in the process. Tonight, after weeks worth of postponed games, the Canucks welcome the Florida Panthers to town, who’re coming off a massive 6-0 victory over the Edmonton Oilers just last night.
While home-ice advantage is finally on Vancouver’s side again, the COVID protocols are certainly not.

The Canucks took their hardest COVID related hit of the season yesterday, when the team announced that both J.T. Miller and Thatcher Demko had been placed in protocol and will be out of commission for at least the next two games. With Jaroslav Halak still in protocol himself, Bruce Boudreau will have to rely on Spencer Martin in net tonight.
The 26-year-old Martin, who’s posted a 5-0-2 record and a .921 save percentage with the Abbotsford Canucks this season, will be making his first NHL start since the 2016-17 season when he was a member of the Colorado Avalanche. He went 0-2-1 in his brief Avs tenure, with his final game coming on February 1, 2017 in a 5-0 loss to the Los Angeles Kings.
With Miller and Bo Horvat out of the lineup, Sheldon Dries will be making his Canucks debut tonight, centring a fourth line of Justin Bailey and Vasily Podkolzin. Dries has been Abbotsford’s best scorer this season, putting up a point per game pace with 25 points in 25 AHL games, including a team-leading 14 goals.
He got some reps in at the bumper spot on the Canucks’ second power play unit.

Head coach Bruce Boudreau was asked about Spencer Martin’s readiness heading into tonight’s game, and what he’s been looking like in practice so far. Boudreau said that while Martin hasn’t been involved in many of the main practices he’d been getting consistent reps.
“He’d go on early with Ian [Clark] about 45 minutes before practice, and on game days Demko would leave the ice and he’d go on with the rest of the players and they’d work some more with him,” Boudreau said. “Systems are a big step for him because he hasn’t played much lately.”
With the Canucks hosting Hockey Talks Night tonight, their annual game promoting mental health initiatives and honouring the legacy of the late Rick Rypien, Boudreau spoke about the differences surrounding mental health when he played the game compared to now.
“In the 70s and 80s, basically when I played, even in the early 90s I don’t think this would’ve even been thought of,” Boudreau said. “The advancements in medical science, quite frankly, is leading us to things like tonight, and I think the sports world is better off for it.”
Boudreau also coached against Rypien on a number of occasions at both the NHL and AHL levels, and Rypien left a lasting impact. “I just remember him being one of the toughest little SOBs that you wanna play against. He took no prisoners,” Boudreau said. “I mean, if you were 6-foot-3 or 5-foot-8 he played hard against you, and those are coaches’ dreams. Guys that play hard and give everything they have and leave it all on the ice after every game.”
The puck drops at Rogers Arena at 7:00 PM Pacific, with TV coverage on Sportsnet Pacific and SN Now.
Uncategorized
Recent articles from Lachlan Irvine