Scenes from morning skate: Canucks look to spoil home opening party in Seattle against the Kraken 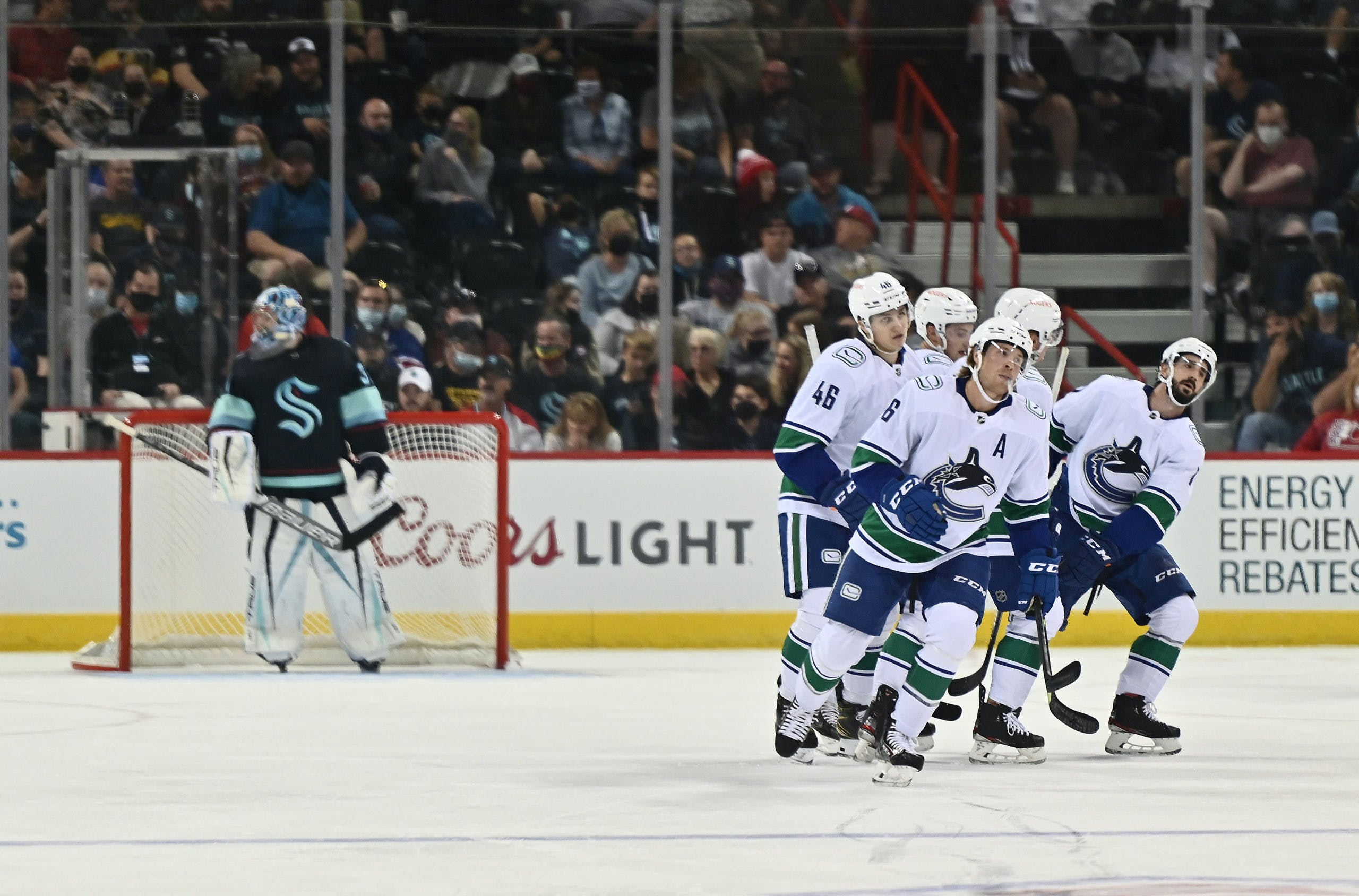 By Lachlan Irvine
1 year ago
The day is finally here. A day Pacific Northwest hockey fans have been waiting for since 1924.
The Canucks finish off their season opening six game road trip today as the very first visitor to the Seattle Kraken and their new home, Climate Pledge Arena. Tonight’s game starts at 7 PM Pacific, and will be broadcast on both CBC and City.
This will be the first official NHL meeting between Vancouver and Seattle, not including their two preseason matchups that the Kraken won. For fans in Vancouver, Seattle and across the NHL, the hope is that this game will become the opening chapter to a long and intense geographical rivalry.
The Canucks got the opportunity this morning to skate on the brand new ice surface under the iconic Seattle Center roof, and the renovated 17,000 seat building looks spectacular. Some of the new features fans will get a glimpse of tonight includes two scoreboards hung at opposite ends of the ice, a goal horn taken off a decommissioned Washington State Ferry, and $9 cans of Life Water. Yes, you read that correctly.
Even with so much hockey left to be played, including the Canucks’ own home opener on Tuesday, this game will undoubtedly be one of the biggest of the season. A chance to draw first blood in a brand new rivalry, be it called “The Battle of the PNW”, “The Clash of Cascadia”, or… *sighs* the “Squid Game”.
Let the battle begin!

Travis Green understands the difference for his team playing in tonight’s game than the other 81. The former Portland Winterhawks coach knows the area well, and what type of atmosphere the Canucks will be up against playing in a new building and a new NHL city.
“Call it an event, call it a special game in a way, but you’re gonna feel a lot of energy in the building tonight, and you want your players to play in those kinds of environments,” said Green. “It’s gonna be a fun game to play tonight, and it’s gonna be a fun game to coach.”
J.T. Miller echoed those sentiments, along with the business that needs to be taken care of as part of the bigger picture.
“It’s gonna be a high intensity, highly emotional game,” Miller said. “We’ve played some good hockey for most of this road trip, and we really wanna make sure we cap it off in the right way before we go home.”
Uncategorized
Recent articles from Lachlan Irvine