Scenes from morning skate: Bo Horvat and Thatcher Demko back in action as the Canucks take on the Flames 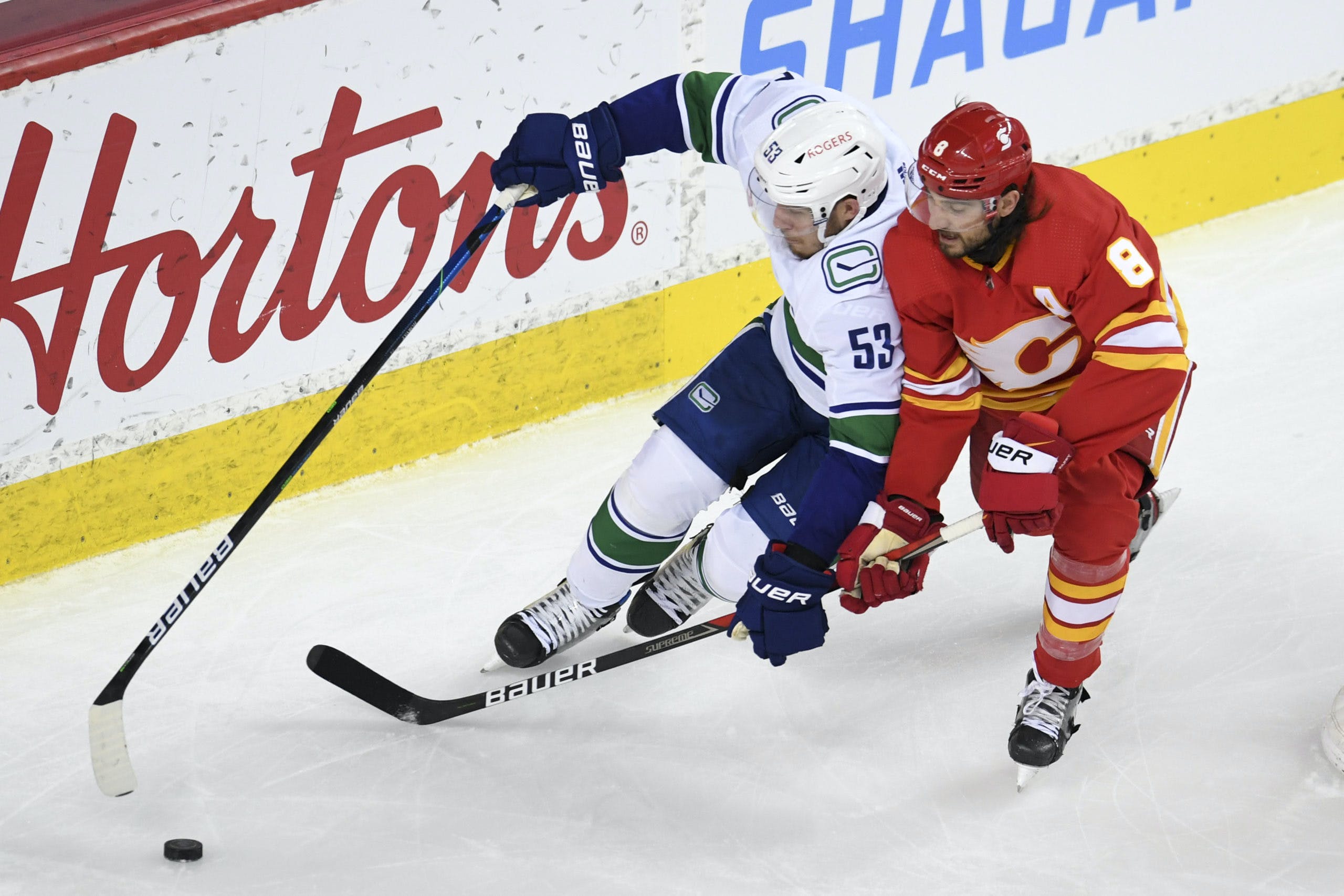 By Lachlan Irvine
9 months ago
Fresh off a 5-1 victory in Winnipeg against the Jets on Thursday, tonight the Canucks will renew acquaintances with another former North Division rival, the Calgary Flames, for the first time this season.
The Canucks and Flames are currently separated by three points in the Pacific Division standings, but Calgary has four games in hand, making this contest all the more crucial in Vancouver’s path to a playoff spot. And thankfully for Vancouver, after J.T. Miller put up a hat trick in his return from COVID protocols, even more Canucks reinforcements are on the way at just the right time.
Let’s go to the lineup, shall we?

No official line rushes from practice went up this morning, but we do know a couple of key players are returning to the ice for the Canucks tonight. Captain Bo Horvat will make his return after missing the last five games in protocol, and Thatcher Demko will play his first game since January 19th, effectively ending the Spencer Martin Era in Vancouver.
With Horvat back at centre, expect Justin Bailey to come out of the lineup and one of J.T. Miller or Elias Pettersson to move back to left wing. The defensive pairings will also see a slight shakeup after Tucker Poolman exited Thursday’s contest early due to what Bruce Boudreau described as “feeling really crappy”.
This morning Boudreau said that Poolman remains out for tonight, and with a now vacant spot on the blue line, Ashton Sautner will likely make his season debut and first NHL appearance since November 3, 2019. Sautner has recorded six points in 23 games with the Abbotsford Canucks this season.

Bo Horvat said that he felt fine throughout his COVID protocol experience, and how after his quarantine in Nashville ended, he flew to Seattle and practiced with the WHL’s Seattle Thunderbirds during his time stuck across the border. “They took me in, and it was great to be able to practice with those guys and somewhat be in practice situations and game situations out there,” Horvat said.
“I feel ready to go, and I can’t wait to play tonight.”
But even though Horvat wasn’t on the bench for the last five games, he still had rave reviews about Spencer Martin’s play. “I watched all the games and he was phenomenal. Obviously held us in a lot of games and performed outstanding, so I was happy for him. Happy that he finally got that win, he deserved it and it was fun to watch.”
Head coach Bruce Boudreau discussed the massive opportunity in front of the Canucks to beat one of the Pacific’s strongest teams, especially with the playoff race heating up. “I’ve talked to the players about the game and how important it is when you’re playing a Pacific Division foe and we haven’t played them all year,” Boudreau said.
“To me, it’s a litmus test to see how we rank against a team that when they’re on, could be as good as anybody in the league.”
Puck drop from the Scotiabank Saddledome is slated for 7 PM Pacific, with TV coverage on Sportsnet as part of their Hockey Day in Canada festivities.
Uncategorized
Recent articles from Lachlan Irvine