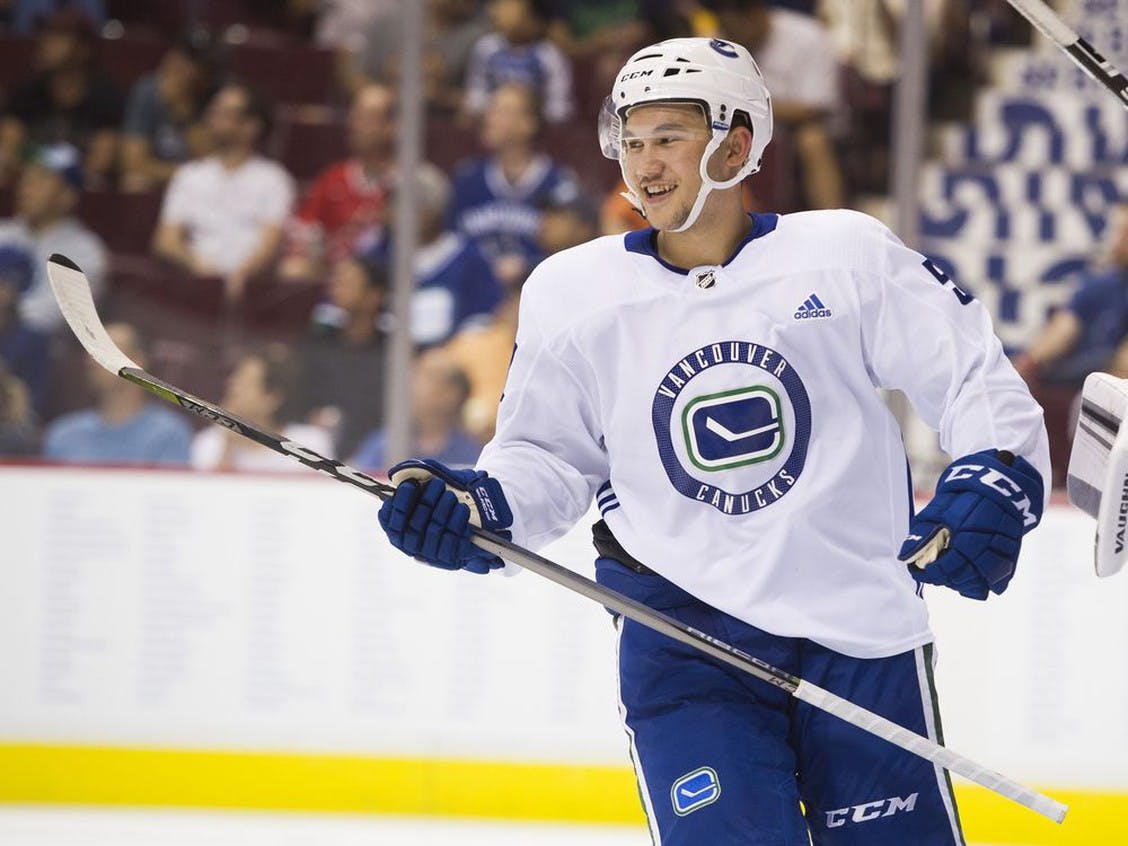 By Cody Severtson
6 months ago
Abbotsford Canucks GM Ryan Johnson held court with the media for 31 minutes in a final Zoom availability to conclude Abbotsford’s inaugural season.
From the team’s challenging season, the flooding in the Fraser Valley, his playoff disappointment, the contract statuses of the coaching staff, and player injury updates, no topic went uncovered. One specific area of concern during the availability was the team’s decision to deploy Jett Woo as a forward over Canucks final eleven games.
Woo’s sophomore season was quite rocky. It wasn’t until a three-point night during game ten that Woo found himself on the scoresheet. By the twenty-game mark, Woo had only tallied an additional four points. While production isn’t everything at the AHL level, it is highly predictive of a player’s ceiling. Johnson acknowledged Woo’s struggles tactfully.
“We’ve talked extensively with Jett about creating an identity for himself at the pro level. Early this year, there were some ups and some downs, and some good points.”
“What is your identity as a player?” has been a development principle of Johnson’s since joining the Canucks in a player development role back in 2013.
Jett Woo entered the AHL after an unexciting final season in the WHL, where he finished as the Calgary Hitmen’s leading scorer for defencemen with 46 points in 64 games played. Woo established himself as a responsible, hard-hitting, competitive, and efficient defensive defenceman during his debut in the abbreviated AHL 2020-21 season with the Utica Comets. Though his production was less than encouraging against the watered-down competition, it wasn’t for a lack of trying. Woo finished the year holding the fourth-best shot attempt differential at 5v5 among all skaters with the fifth-most shot attempts and primary shot assists.
As for player identity, Woo’s rookie campaign gave the fanbase a glimpse at a potential hard-nosed all-situations defenceman. 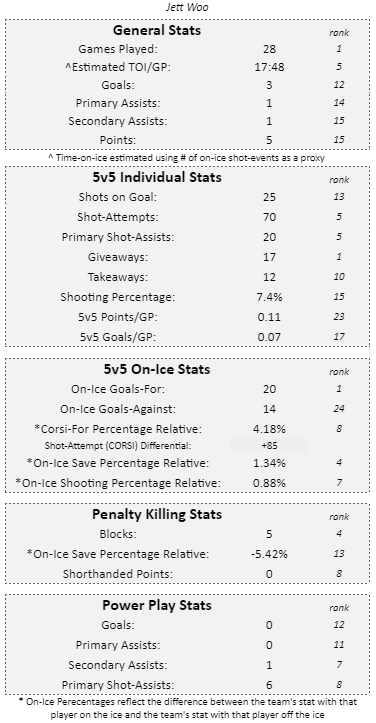 Jett Woo 2020-21 Player Card courtesy of AHLNucksHarvest.com
Unfortunately, Woo struggled to build off of his promising rookie campaign. Johnson was fair in his critique of Woo, identifying the specific difficulty of adjusting to the true AHL, after last season’s watered-down brand of AHL hockey, as one of the major culprits of his youth’s struggles.
“We discussed it with him last year and again this year. For some of our second-year players, this was a tough season of coming out of the pandemic year where the AHL was a shell of itself in the way Taxi Squads diluted the American Hockey League. While you saw the year was very ramped up, playing a very difficult physical Pacific Division, with travel, it was a challenge for second-year players across the AHL, including our own.”
At times, fans saw shining examples of the type of gritty two-way defenceman Woo could be. However, his best games were few and far between, with his aforementioned three-point night being a high watermark of the season. Woo finished his second year with eight points in 42 games played. His points-per-game was near the bottom of all U22 defencemen in the AHL and put him in “not very favourable” company among his peers.

2021-22 AHL U22 Defencemen Points Per-Game (the further right, the better)
The lows of his season were quite low. After a healthy scratch and a brief stint on IR, Woo was impacted by the team’s COVID outbreak in early January, missing two games. An injury then sidelined Woo from January 17th until March 9th, missing 19 games total.
Upon his return, Woo spent the next thirteen games paired with either Jack Rathbone or Brandon Hickey, a 2014 3rd round draft pick of the Calgary Flames signed by Abbotsford to an AHL professional tryout contract. During this stretch, Woo produced zero points but a positive goal-differential. To the surprise of no one, the seven Abbotsford goals that occurred with Woo on ice all came while paired with Rathbone. Of the five goals-against, all but one came while paired with Hickey.
During the final stretch of the season, injuries and call-ups began to decimate Abbotsford’s forward contingent. With it came Woo’s pivot to a bottom-six forward.
“We were playing eleven forwards and seven defencemen, and to give him some more [ice time], and [to get him] involved. Using his assets, his speed and physicality. He embraced the role to play some minutes up front and ended up doing a fantastic job with it,” explained Johnson.
Woo found himself on the scoresheet once over the final nine games of the regular season, a primary assist on a tiebreaker goal against who else but their playoff nemesis, the Bakersfield Condors. Through those nine games, Woo held a negative-2 goal-differential at 5v5 with ten shots on goal.
Woo did not fare well during the short-lived playoff series against the Condors. Bakersfields’ speed ate the Canucks alive, ad nauseam. Woo finished the playoffs with three shots on goal in game one and zero in game two, while on-ice for zero goals-for and all three goals-against in the Canucks’ game two loss that ended their season.
Despite Johnson’s earlier praise of Woo’s tenure as a forward, he remained steadfast in his media availability that the plan moving forward was to get Woo back to the blueline where he belongs.
“We expect Jett to have a big summer; come back having learned a ton [from] his experience this year and take another step forward. Ultimately, we see him being back on the blueline and continuing to grow in that position.”
After a challenging season, the question becomes, can Jett Woo’s next step take him beyond anything more than a gritty bottom pairing AHL defenceman? Does NHL potential remain?
Uncategorized
Recent articles from Cody Severtson