The risers and fallers of the Vancouver Canucks’ season thus far 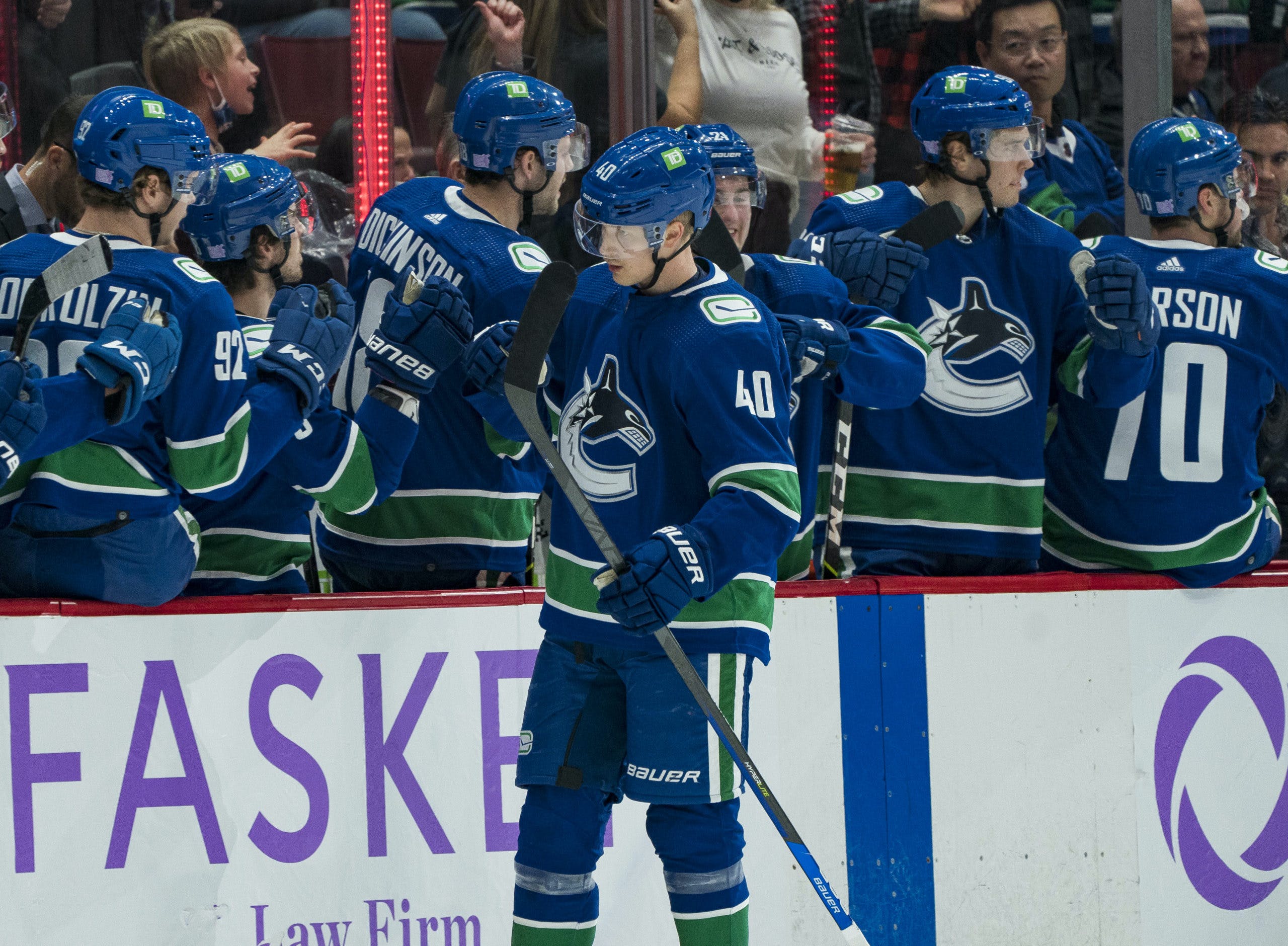 By Noah Strang
1 year ago
The Vancouver Canucks are in trouble. They’ve won only two of their last ten games and just finished a three-game road trip in which they grabbed zero points and were outscored 19-6. Both general manager Jim Benning and head coach Travis Green are on the hot seat and if this continues for much longer, the fans at Rogers Arena will voice their displeasure. Loudly.
This season has been the culmination of eight years of work from Benning and has only cost the franchise multiple high draft picks and any sense of cap flexibility. This is a point that has been deservedly hammered into the ground, yet it will remain relevant as long as the current management group is still in place.
While these bigger picture issues of who will be the general manager and coach to lead this franchise in the future remain, there are short-term decisions that need to be made with the roster personnel. This season’s struggles have made the future core of this team become a little murky, right up to and including the best players.
Despite the team’s inability to win a game, there have been a few bright spots this season that are cause for cautious optimism. On the other hand, there are numerous issues that the Canucks are facing right now that do not have an obvious solution in sight.
While optimists will continue to shout about how early in the season we are, the reality is that we are about 20% of the way through and we’ve got a large enough sample size to come to a few early conclusions. Saying that, here are the Canucks who are rising in value and those who are falling.

The easiest choice on this list, Höglander has been one of the most impressive — if not the most impressive — Canuck so far and has taken another step in his sophomore season after an impressive rookie campaign. He leads the Canucks in 5-on-5 goals and is constantly one of the most noticeable players on the ice, no matter the score or situation.
Despite his great play, Höglander is seventh among Canucks forwards in all-situations time-on-ice per game and eighth in power-play ice time per game. There is more room for him to grow with increased ice-time and if he continues to play this way, he’ll force his way into the top of the lineup.

Another easy selection, Pettersson hasn’t yet busted his early-season slump and the longer he struggles, the more the criticism ramps up. The Canucks have built their team around the fact that their best players will outscore the opposition at 5-on-5 — it was the formula that brought them success in 2019-20 — but they’ve been outscored 9-5 with Pettersson so far this year during those minutes.
As an individual, Pettersson deserves a lot of the blame for the Canucks’ struggles during those minutes. He has yet to score a goal without the man-advantage and is generating just 4.56 shots per sixty minutes at 5-on-5, less than players like Juho Lammikko, Matthew Highmore, and Justin Dowling.
There are still plenty of good reasons to believe that Pettersson will turn things around and get back to being the superstar everyone knows he can be. There are plenty of greater issues with the team and the systems that are making things a little more difficult than usual for Pettersson, but he does hold some personal responsibility to be better. He’s his own toughest critic and too competitive to continue to play like this for long, but for now, his stock is falling.

After an up-and-down sophomore campaign, there were legitimate questions about Hughes’ future with the team. While it was clear that he’s a great player, his messy defensive stats during his second season raised debate over whether he was going to be a two-way stud or a great offensive player who is a defensive liability. So far this season, Hughes has looked more like his rookie self and has been very good in both ends of the ice.
On offence, Hughes is currently scoring at just under a point-per-game pace and has even scored twice at 5-on-5. He’s one of the most creative players on the team and the Canucks are noticeable more dangerous while he’s on the ice. Even when he doesn’t show up on the scoresheet, Hughes ignites offence through his crisp breakout passes, ability to keep the puck on his stick, and the attention he demands from opponents.
On defence, Hughes has had a much more positive impact while on the ice this season compared to last. The Canucks are only allowing 28.83 shots against per sixty minutes at 5-on-5 while he’s on the ice, the best mark of his career and second-best on the Canucks this year behind Oliver Ekman-Larsson.

The Canucks’ defence core was outlined as one of their biggest weaknesses entering the season and that fear has turned out to be justified thus far as their depth pieces have been getting caved in at 5-on-5. Recent injuries are going to force the Canucks to lean even more on these players which could be a large issue if the early results have been any indication.
The Canucks are scoring just 14.29% of the goals at 5-on-5 while either Jack Rathbone or Brad Hunt are on the ice. Rathbone entered the season with a healthy dose of hype as one of the only players left in the Canucks organization who can legitimately be called a prospect. He’s struggled defensively — a common issue for young offensively-inclined defensemen — and has been taken out of the lineup a few times as a result.
Madison Bowey and Kyle Burroughs have also had their fair share of struggles when inserted into the lineup. The four of them (Hunt, Rathbone, Bowey, and Burroughs) are at the bottom for the majority of defensive on-ice statistical categories for the Canucks. For the Canucks to put together the winning streak necessary to be in contention for a playoff spot, they’re going to need better performances from this group of players.
Uncategorized
Recent articles from Noah Strang