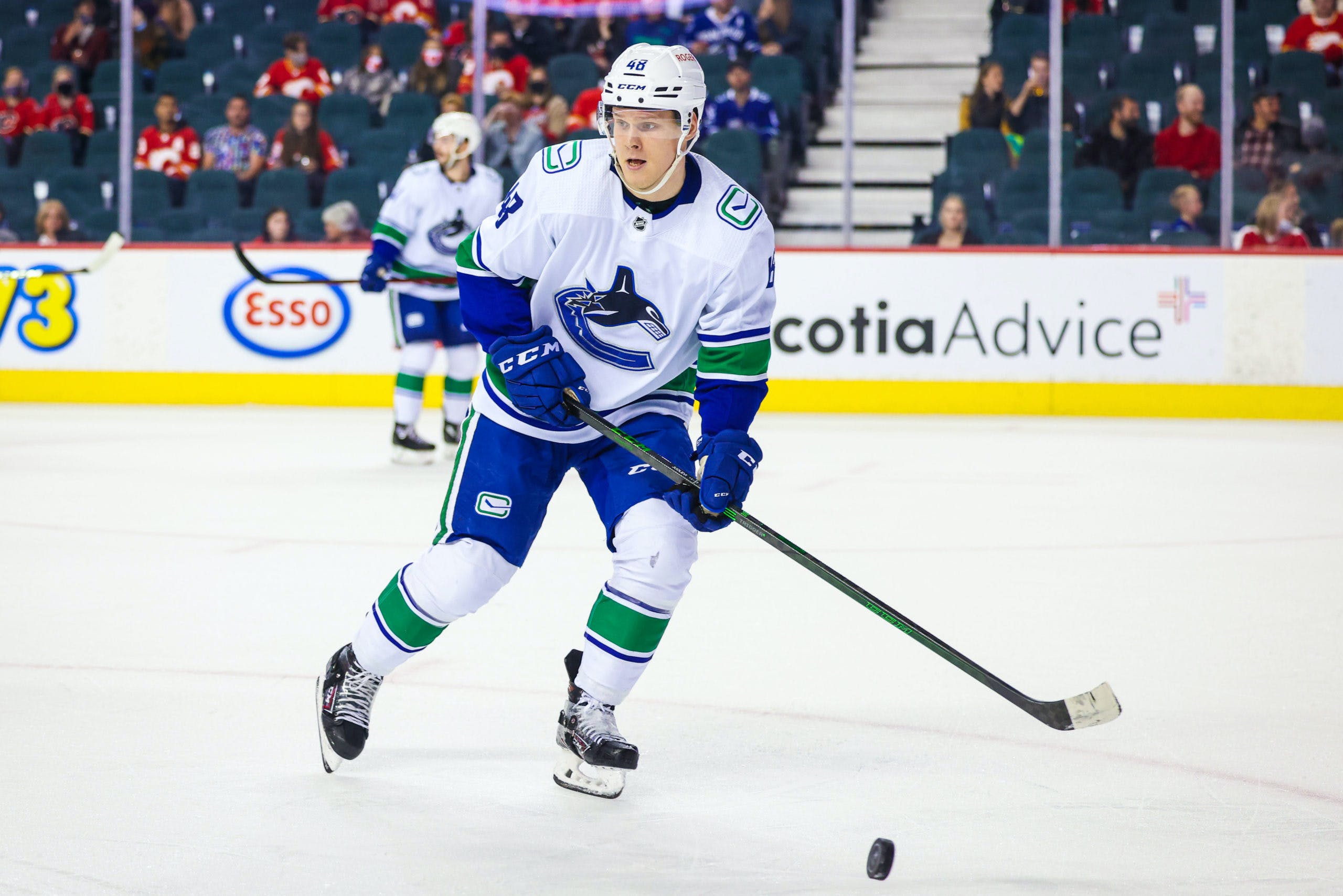 By Colton Davies
7 months ago
Today, we are going to take a dive into the 2016 NHL Draft which saw former Vancouver Canucks GM Jim Benning select London Knights defenceman Olli Juolevi fifth overall. Heading into the draft Benning’s intentions were quite clear that he wanted to draft a defenceman for the future. Juolevi was often compared to Oliver Ekman-Larsson (funny how that works out) for his excellent poise, composure, and puck-moving abilities. With such a loaded resume, it shouldn’t have been much of a shock when Benning selected him.
However, there was some outrage within the fanbase as the Calgary Flames selected Matthew Tkachuk with the very next selection. Tkachuk dominated the OHL regular season and playoffs. Putting up 107 points (30 goals, 77 assists) in 57 games followed up by 40 points (20 goals, 20 assists) in 18 playoff games. While we are on the topic of players who were selected after Juolevi, we should talk about a few defencemen who are part of that list.
Two-time Stanley Cup Champion Mikhail Sergachev was selected ninth overall by the Montreal Canadiens, Charlie McAvoy was taken 14th overall by the Boston Bruins, and the Arizona Coyotes selected Jakob Chychrun 16th overall, some pretty solid names. To add insult to injury, Juolevi is just one of two defencemen selected in the first round of the 2016 draft who have played less than 35 NHL games.
“We haven’t drafted a defenceman in the first round in eleven years, so we liked the players that went ahead of us, but we just felt that at five, if we could get a high-end defenseman, a guy that we think is going to be a top-pairing defenceman it served us good to keep adding to our depth on the back end,” Benning said. “He’s a high hockey sense guy. We just thought in today’s game the ability to break up plays and move the puck up the ice is a special skill. We felt he’s a complete defenceman and we couldn’t go by him.”
The defence core was something that Benning and the Canucks were desperately trying to revamp when they drafted Juolevi. At the time, they had thought of Juolevi to be the future of the Canucks’ defence, which did not go in their favour.
Juolevi’s career took a turn downhill when he suffered a back injury while off-season training for his first pro season in North America. The Canucks revealed that he would need “a microdiscectomy procedure for a disc in his low back”. Then the following year during the 2018-19 season, he suffered a season-ending knee injury while playing for Utica. He was off to a good start putting up 12 points in 18 games. Then came two more surgeries for his knee, followed up by a hip issue. I think you understand the problems that he had to endure, the injuries just wouldn’t end and ultimately have hindered his development.
But during the 2019-20 season, after missing a handful of games, Juolevi went on to record 25 points (2 goals, 23 assists) in 45 games with Utica, and that was enough to get the nod from Benning and Green to join the Canucks during the playoff-bubble. He would play just one game against the Minnesota Wild, posting 5:10 of ice time, and a Corsi For % of 71.43%. Then came his first season with the Canucks during 2020-21, this was his chance to prove to everyone why he was once touted as the best blueliner in the Canucks system. He played 23 games, logged 281:18 of ice time, and recorded three points. He held a Cors For % of 45.4% and his Fenwick-For was 44.96%, all recorded at 5v5. He was a healthy scratch for most of the season and even when he did play, it was very limited ice time.
Juolevi also had a bad bout with COVID-19 when the Canucks had their April 2021 outbreak.  “Juolevi was one of our guys who got really sick,” former gm Jim Benning said back in May. “He lost a bunch of weight there in those three weeks. I think he lost 10-15 pounds.” Thankfully, Juolevi said he wasn’t one of the players who had long term effects from his bout with the virus, which made his antics at training camp all the more inexcusable.
After training camp and getting flat-out outplayed by Jack Rathbone, the Canucks’ patience began to run thin, and essentially, an ultimatum arose, it was either trade him or waive him — which posed the risk of potentially losing him for nothing.
In October, the Juolevi nightmare finally came to an end. He was traded to the Florida Panthers in exchange for Surrey, BC, product Noah Juulsen and Finnish forward Juho Lammikko. Juulsen has suited up for eight games with the Canucks this season, registering two points, he has spent most of his time with the Abbotsford Canucks.
Benning’s acquisition of Lammikko can go down as one of the better moves he made throughout his tenure with the Canucks. Lammikko has become a fan favourite and had found incredible chemistry on the fourth line with Matthew Highmore, and former Canuck Tyler Motte. As mentioned before, he had a slow start under Green but has had a resurgence since Bruce Boudreau has taken over the coaching duties.
Juolevi played just 10 games with the Panthers, and could not produce a single point. Then he was placed on waivers to make room for goaltender Spencer Knight, and was subsequently claimed by the Detroit Red Wings. Now that Juolevi has left the Panthers, it’s even more evident that the Canucks have won that trade fair and square.
Looking back on this draft hurts as a Canucks fan. This was one of the worst draft acquisitions by Jim Benning, but at the end of the day, the Canucks at least gained something from the Juolevi draft selection.
Nation Takes
Recent articles from Colton Davies