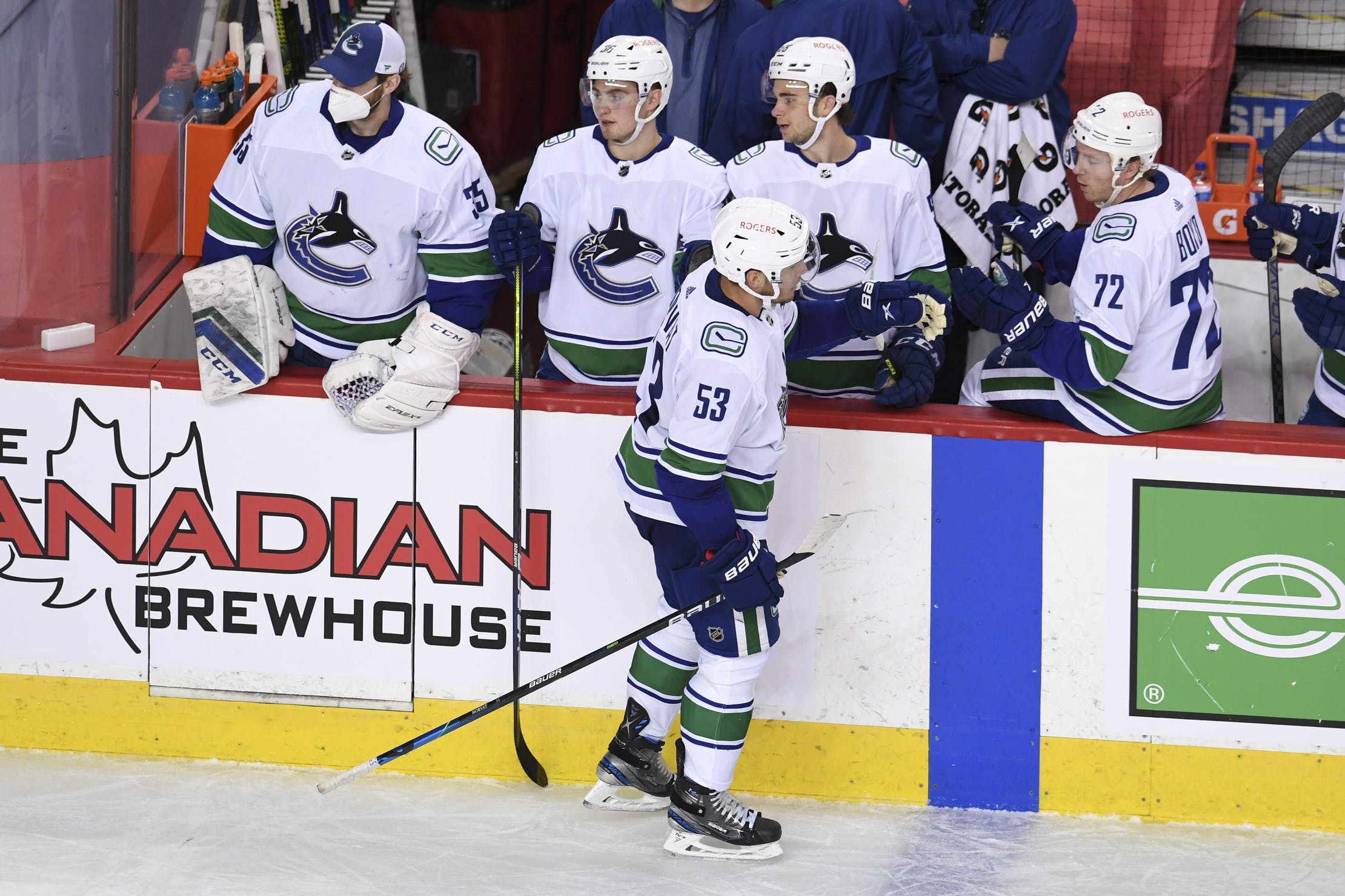 By Bill Huan
1 year ago
When Jim Benning acquired Oliver Ekman-Larsson and Conor Garland from the Arizona Coyotes over the summer, it was obvious what this season’s mandate was: playoffs or bust.
And if the Canucks don’t rattle off a winning streak soon, it’ll become increasingly difficult to see how they’ll be able to squeak into the postseason. Having accumulated just nine points in 11 games so far, the team will need to play at a 99 point pace for the remainder of the season to end up with 95 points, which has roughly been the playoff cutoff line in recent years.
Playing at that level is a tall order to ask of a club that was projected to be a bubble team anyway, and heads could start rolling as soon as this month if the Canucks continue to struggle in the coming weeks. That might seem like an overreaction right now, but it makes sense if you look at it from the perspective of Benning himself.
Now in his eighth season as GM, Benning knows that he’ll be out of a job without a playoff appearance this year. As a result, it’s only natural for him to do everything to salvage this situation. In other words, Benning will be looking for scapegoats, and who better to blame than the team’s head coach?
No matter how you feel about Travis Green, there’s no denying that coaches are usually the first to get axed whenever a team doesn’t perform up to expectations. Potentially firing Green might be the easiest route for Benning considering that the former is one of the league’s longest-tenured coaches, even though he doesn’t have much success to show for it:
Stats as of November 5, 2021.
As you can see, Jeff Blashill is the only coach who’s had a longer leash than Green but with less success, and Red Wings have been purposely bad unlike the Canucks. So even if Green doesn’t get fired in-season, he’s likely out the door alongside Benning next summer assuming the club doesn’t make the playoffs.
Speaking of the team’s GM, it’s a surprise to some that he’s lasted this long already. Benning is already the second longest-tenured GM in Canucks history and is the only one who has been at the helm for five or more seasons without at least one division title or an appearance in the Cup Finals. Taking everything into consideration, it’s hard to see how (or why) either Green or Benning would last beyond this year if Canucks fans in April will once again be talking about how heartbroken they’ll be after the draft lottery instead of cheering their team on in the postseason.
Regardless of what happens in the front office or behind the bench, it’s the happiness of the actual players that will most impact the team. Bo Horvat has already stated that having a repeat of last year’s performance is unacceptable, and with him set to hit unrestricted free agency in 2023, would anyone blame him if he considered leaving for greener pastures should the Canucks continue to mire at the bottom of the standings?
Now, Horvat is just a single name, and he’s not the team’s best player either. However, he is the captain and the original building block of this iteration of the Canucks. If Horvat’s future is uncertain, that changes the team’s entire perplexion, both on the ice and perhaps more importantly, off of it as well.
Even if Horvat wants to remain a Canuck, other savvy veterans such as J.T. Miller certainly won’t be afraid to express their potential discontent. The worst case scenario would obviously be a disgruntled Elias Pettersson, and even though he’ll still be under team control for a while, an unhappy Pettersson could make negotiations for his third contract extremely difficult for the club.
Of course, everything we just reiterated is speculation at this point, but it’s not without basis either. Remember, Pettersson already made some eyebrow-raising statements over the summer and Benning’s win-now moves were heavily influenced by a locker room that seemed to lose trust in management after they allowed a number of key free agents to leave last offseason.
No matter how you spin it, another lost season for the Canucks won’t just result in the firings of Benning and Green, but it’ll also put the futures of certain core players into question. And if the team misses the playoffs once again, what would stop the next management regime from changing course entirely and making major overhauls to the roster?
Needless to say, the Canucks need to start winning, and they need to do it fast.
Uncategorized
Recent articles from Bill Huan