Which Pittsburgh Penguins might the Canucks target in a trade with Jim Rutherford calling the shots? 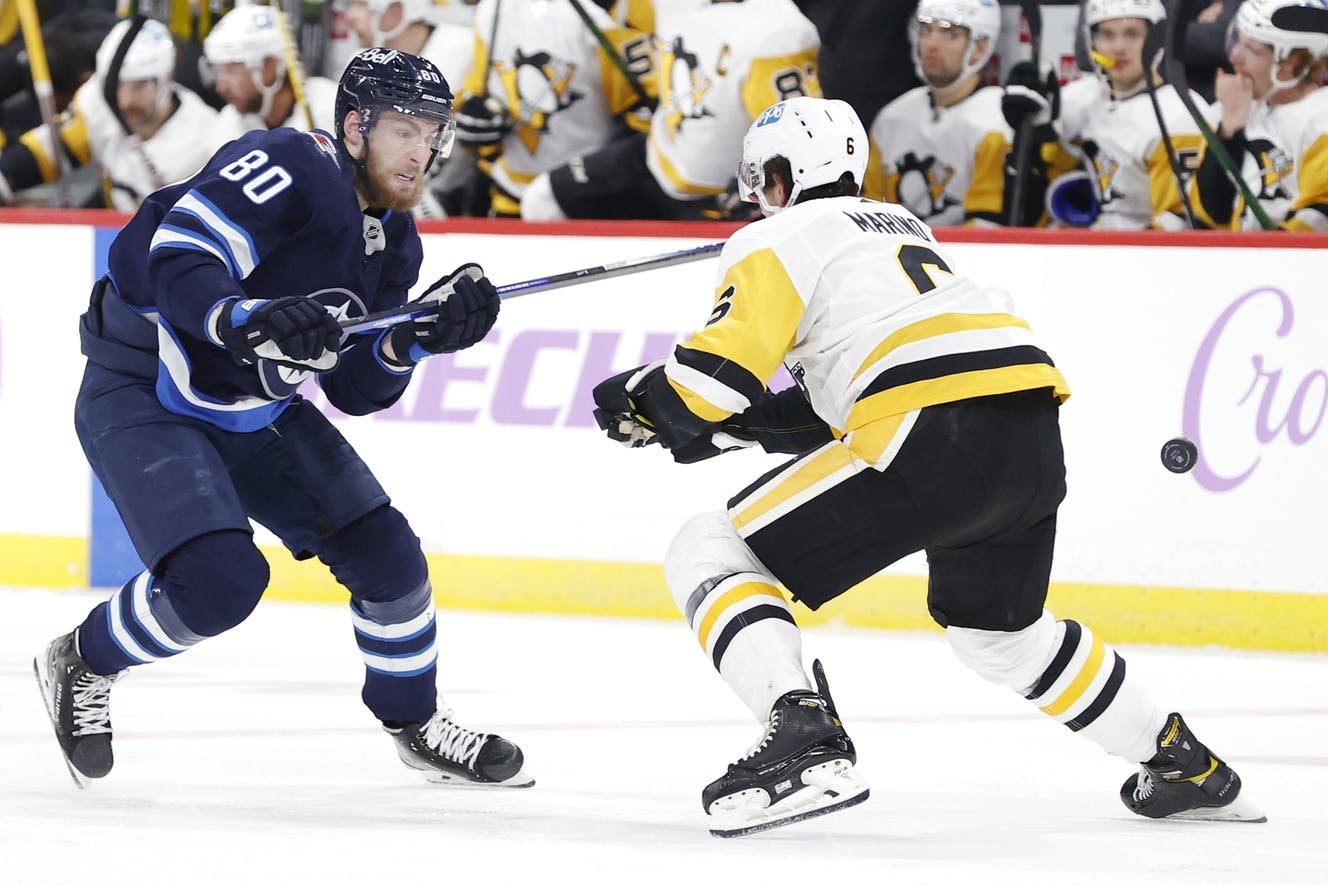 By Stephan Roget
11 months ago
The search for the next GM of the Vancouver Canucks continues.
Until that search reaches a conclusion, it’s President of Hockey Ops Jim Rutherford calling all the shots in the organization.
Both Rutherford and the folks who hired him have let it be known that he doesn’t necessarily have to wait for a new GM to start making moves. If the right opportunity to improve the Canucks’ roster presents itself, Rutherford and Co. will hop on it.
And the latest “Trader Jim” has a pretty low threshold for what constitutes the “right opportunity” for a transaction.
It’s no secret that Rutherford likes to make trades. More specifically, he has a penchant for going out of his way to target “his guys” — and oftentimes, “his guys” include players that have played on his roster before.
The man they call JR really seems to like acquiring former players, and sometimes even acquiring them multiple times.
Ron Hainsey, Matt Cullen, and Kasperi Kapanen are all names that Rutherford has brought into his organization on at least two separate occasions.
On the flip-side, he’s also dealt Brandon Sutter away twice.
Switching to the present tense, Rutherford’s most recent former employer, the Pittsburgh Penguins, are having themselves a tough season. A 7-2-1 run has them back on the fringe of the playoff picture, but there’s a real chance that they fall out of the race in a tight Metropolitan Division as the year progresses.
JR’s new team, on the other hand, is making a charge. As of this writing, they’re 5-0-0 under coach Bruce Boudreau — and while they’re still currently further away from a playoff spot than the Penguins, they also have an easier set of division standings to climb.
Which all goes toward saying that the Penguins could very well become sellers by the time the 2022 Trade Deadline rolls around, and that the Canucks could very well become buyers.
Either way, there may just be some fertile ground for a Pittsburgh/Vancouver transaction in the near-ish future — and there are a number of Rutherford’s “guys” still on the Penguins who could prove useful in a Canucks uniform.

As the right-handed defender with the brightest future in Pittsburgh, it doesn’t take a rocket scientist to figure out why Rutherford may want to bring Marino with him to Vancouver.
Rutherford already couped Marino once, acquiring him for a conditional 6th round pick when Marino refused to sign with the Edmonton Oilers out of Harvard.
Marino hit the NHL the next year, notched 20 points as a rookie blueliner, and finished eighth in Calder voting. After a sophomore slump last season, Marino has rebounded nicely in 2021/22. He’s back at his rookie scoring pace, playing special teams, and eating tough minutes and matchups. In other words, he’s a great fit to strengthen the Canucks’ right side — and the new Penguins brass may not be as attached to him as Rutherford was.
If Marino can be picked up for anything less than a first round pick, that’s something the Canucks need to consider.

Kapanen was Rutherford’s first draft pick with the Penguins — 22nd overall in the 2014 Entry Draft — but was then traded for Phil Kessel later that season. Rutherford then traded the 15th overall pick and change to bring Kapanen back to Pittsburgh in 2020, and he’s been there ever since.
A couple of COVID-shortened seasons have kept Kapanen’s overall numbers down, but last season he scored at a 0.75 PPG pace and is nearly back at that pace in 2021/22. If the Canucks are in the market for another top-six scorer — and they could be, especially if Rutherford trades some players out first — Kapanen would be a relatively cheap and effective option.
The Penguins may prefer to move on instead of handing Kapanen a long-term contract as they enter a re-tool phase. No one wants Rutherford to trade a first for him again, but a lesser price-tag would be appealing.

The Canucks’ penalty kill has improved leaps and bounds under Boudreau, but it still may be suffering from a shortage of personnel. Enter Blueger.
Blueger may seem a tad overpriced as the Penguins’ ostensible fourth line center, but then he does a lot more than the average fourth line center. Blueger kills penalties with aplomb, plays regular shifts against opposing top lines, and contributes a reasonable amount of offence to the mix. If only he were right-handed, he’d be exactly what the Canucks need in their bottom-six.
Even as a left-hander, Blueger has some appeal — but only if he’s being shopped for an affordable price as the Penguins try to cut cash.

Rutherford has a long, strange history with Zucker. He tried to land the forward from Minnesota at the 2019 Trade Deadline, only to have the deal fall through. Then, in February of 2020, Rutherford arguably overpaid to finally nab Zucker, trading Alex Galchenyuk, Calen Addison, and a first round pick.
At the time, Zucker was struggling through a couple of difficult seasons after a career year in 2017/18, but he turned in around in Pittsburgh for 12 points in 15 games. Since then, however, he’s settled back down to sub-0.5 PPG hockey.
Zucker may seem like he’s overpaid right now, and that’s because he is. A $5.5 million cap hit is enough to give Zucker near-negative value, and definitely enough to scare the Canucks away. But if they move some salary out — perhaps in the form of JT Miller or Tanner Pearson — they could find room for Zucker.
That career season, by the way? With its 33 goals and 31 assists? It came under Boudreau’s coaching.

Friedman isn’t a household hockey name — not this Friedman, anyway — but he’s quietly established himself as an NHL defender ever since the Penguins nabbed him on waivers last season. He’s definitely a bottom-pairing type, but there are some appealing qualities to him, like his right-handedness and his underrated offensive pop. Don’t expect Friedman to handle tough minutes or spend time on the top pairing, but he could be an upgrade — or at least comparable depth — on what the Canucks have on the bottom-end of their right side right now.
He probably wouldn’t cost all that much, but he won’t end up on waivers again anytime soon.

At first blush, there’s not much to get excited about with Reilly. He’s a 24-year-old former seventh round pick of Rutherford’s who has had to battle his way upward to even reach the pro ranks. An offensive defender at the collegiate level, Reilly has settled into more of a two-way role in a difficult transition to professional hockey. He’s split time between the AHL and ECHL this season, and has yet to notch a single AHL point.
But Reilly is big, he’s a good skater, and he is reportedly high on character. Rutherford has already poured a lot of time into Reilly’s development, so he may want to continue the project in Vancouver. A late pick most likely gets the job done if JR is interested.

Okay, we’ve clearly lost the plot at this point. There’s just no way that Letang to Vancouver makes any sort of sense, right?
Well, mostly right.
There have been some rumblings that the Penguins — should they fall out of the playoff race by March — could consider moving on from their two high-priced franchise icon UFAs in Letang and Evgeni Malkin. The Canucks should have no interest in Malkin at this point, but Letang is at least a little intriguing.
Even at age 34, Letang would instantly become the Canucks’ best all-around defender, and go a long way toward shoring up the right-side. He’s offensively potent, capable of skating against opposing top lines on a nightly basis, and an eater of absolutely massive minutes. Whatever level of contention the Canucks find themselves in when the Trade Deadline arrives, the addition of Letang would take it up a notch or two. His $7.25 million cap hit is daunting, but maybe not so daunting when prorated in March. If Rutherford can move out a salary or two and actually start to accrue some cap space, he might just be able to pull it off.
But should he? Letang is a free agent after this year, and the Canucks probably don’t have enough space to offer him an extension unless their salary structure drastically changes. Even if they could, signing a UFA to a lengthy contract at age 34 is inherently risky. And then there’s the cost of acquisition to consider, because the price-tag for Letang starts at a first and a bluechip prospect and only goes up from there.
For a player that would likely be a rental — even a supremely high-quality rental — Letang just isn’t worth pursuing for the Canucks.
Hopefully, though, he was at least worth reading about amid these other, slightly-more-realistic targets.
Uncategorized
Recent articles from Stephan Roget