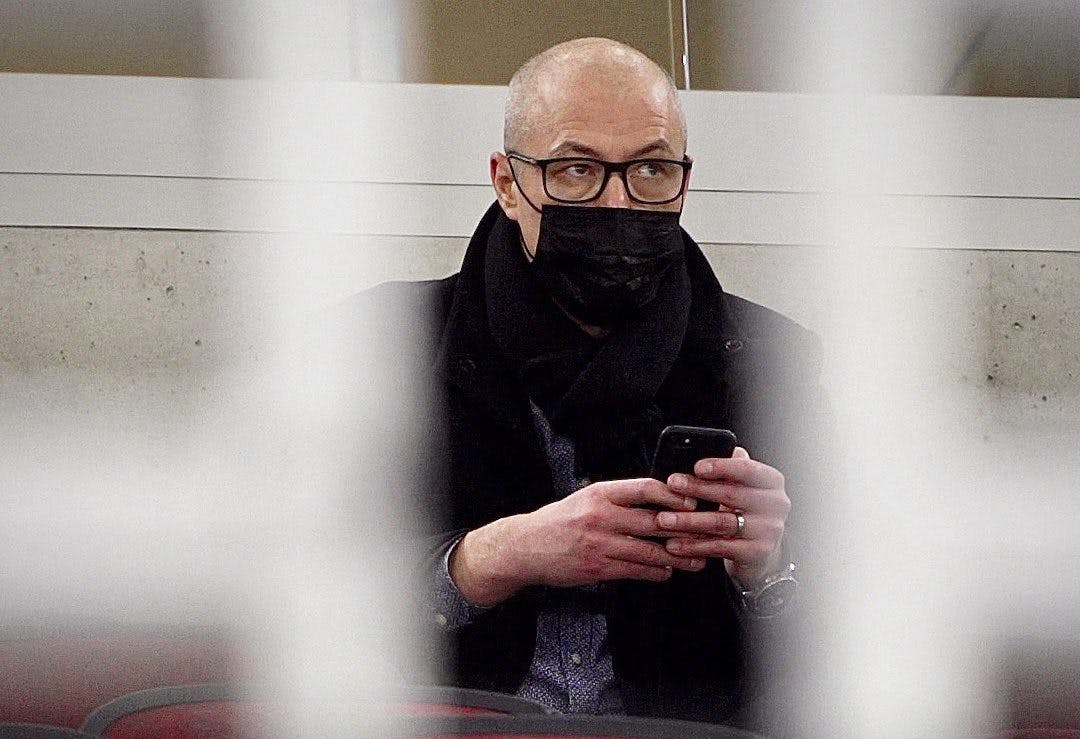 By Lachlan Irvine
1 month ago
If Canucks fans tuned into last night’s After Hours hoping for a strong state of the union address from GM Patrik Allvin, the response they got could only be described as confusing.
Before the Canucks’ dismal 5-1 loss to the Winnipeg Jets in front of a nationally televised audience, Elliotte Friedman reported that the team had no plans to rebuild, but also that every player except Elias Pettersson was available for the right price.
Needless to say, it was a night when the front office needed a PR victory of any kind. But as After Hours host Scott Oake raised question after question about the team’s direction, many coming directly from fans off social media, Allvin’s answers didn’t inspire confidence.
Rather, what Allvin offered was a world-class lesson in how to give long responses without actually answering any questions. Whether it was being asked to crown Elias Pettersson as the Canucks long-term superstar or the futures of Brock Boeser and Bo Horvat, Allvin was non-committal on all fronts.
When Oake asked Allvin about the high quality of the Penguins teams he won two Stanley Cups with and how the Canucks could get to that level, the rookie GM instead talked about their issues this season.
“I think the preparation of 82 games, you want to see improvement from day one to game 82. Because after game 82 there is different hockey and as I said up to this point, we’ve been very inconsistent,” Allvin said.
So Oake tried a different angle. “You are not responsible for anything that happened here before Jim Rutherford hired you last January. But you do know the Canucks have had a difficult decade since getting to the Stanley Cup Final in 2011, being around .500 while trying to make the playoffs every year. Do you sense that Canucks fans have had their patients worn thin?”
Allvin focused his answer solely on the franchise’s lack of a championship.
“I think the Canucks fans here are phenomenal. The support they give the team and us every night, it’s impressive,” Allvin said. “I understand just looking at the rafters here, we’re missing a banner. And our job is step-by-step and building brick by brick, and hopefully, we can add a banner that’s that is missing here.”
Unless he’s talking about Roberto Luongo’s jersey banner, Allvin’s almost cavalier attitude toward the difficulty of winning a championship undoubtedly sounded alarm bells for fans.
The previous regime, led by Jim Benning, had infamously refrained from promising Stanley Cup aspirations in the latter half of their tenure. Instead, they opted for phrases like “making the playoffs” or “winning a few rounds”. While Allvin acknowledging the lack of a Cup banner in the rafters is more than the last people in charge did, it still rang hollow thanks to the lack of a concrete plan.
When asked about whether he classifies the Canucks’ vision as a retool or rebuild, Allvin chose neither.
“I think as a team in today’s world, you’re always building. You’re never satisfied, you always go brick by brick and when you’re actually winning, you start building again. So I guess we will just continue to build there,” Allvin said.
“And as I said, when Jim and I came in there, there were a lot of good young pieces here on the team and we want to continue to add younger players, preferably 25 and younger. I think we’ve been able to do so at this point, and it takes time.”
But that’s not to say there weren’t any revelations. While answering a question about how the Canucks could benefit from navigating their tricky unrestricted free agent situation by adding younger players, one key name Allvin mentioned stood out.
“Starting the season here, I believe we were of the six youngest teams going into the league here, and we were aware of our goal,” Allvin said. “Our vision here was to bring in some youth to our organization. We’re able to add a couple of players here as we were going with Ethan Bear and Riley Stillman.”
Stillman, who barely lands on the cusp of the front office’s arbitrary ’25-and-under’ rule at 24 years old, has been a defensive liability on an almost nightly basis and has become a regular healthy scratch option for Bruce Boudreau.
Allvin then went on to use a familiar excuse for the team’s lack of moves: the NHL’s flat salary cap.
“I think there’s a lot of good things from our younger players in Studnicka, Åman and Joshua. Kuzmenko has been playing pretty well here too. But you know, definitely challenging for all teams with UFAs and mainly the flat cap here.”
Allvin may be only a year into his role, but in the eyes of many, the Canucks have gone through nine years of this vague strategy already. The Canucks’ plan across two different front offices has been impossible to nail down and often akin to a bad puzzle. One where half of the pieces don’t fit anywhere and the other half is just broken Lego.
What fans want is something concrete, a clear and open vision for turning around a club that’s made the playoffs once since 2015. But regardless of what GM has been in charge at the time, the team has all but refused to offer one.
Allvin’s belief that a team is “always building” only works if the foundation of it is rock solid. If you take over midway through a construction project and the blueprints were flawed to begin with, stacking more floors on top without cohesion isn’t going to solve anything.
No one was expecting Allvin to drop bombshells and give away all of the club’s trade secrets to the public. But the complete lack of substance has people wondering just how much things have actually changed in the last year.
So far, it’s feeling like the same old song and dance both on and off the ice.
Editorials
Recent articles from Lachlan Irvine