NHL looking to make the season longer, Connor McDavid calls out the rules, and more: Around the League 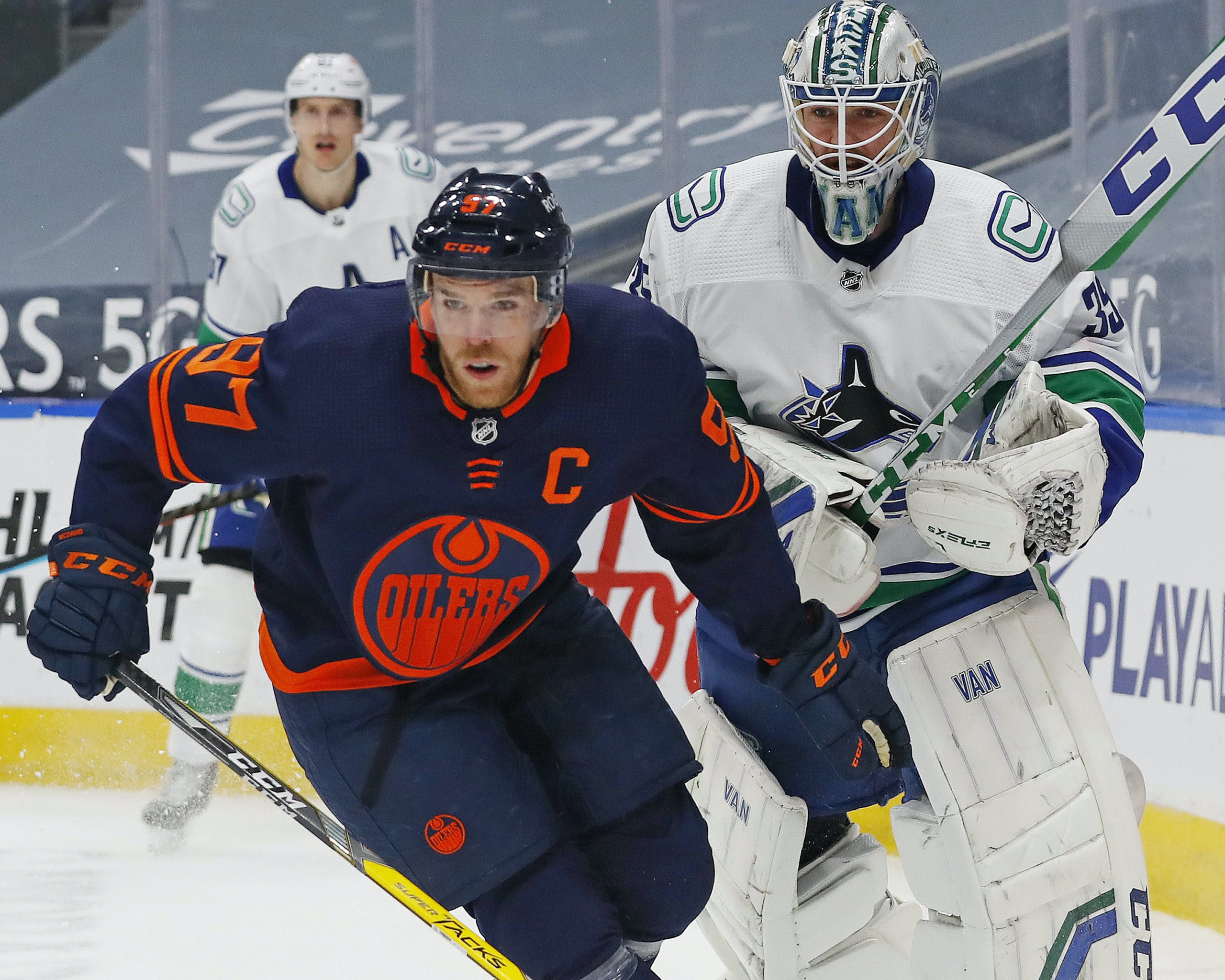 By David Quadrelli
1 month ago
Welcome back to Around the League — the column here at CanucksArmy in which we examine news from around the National Hockey League, oftentimes through a Canucks-tinted lens.
It’s been a while since we’ve cooked up one of these, hasn’t it?
There are three things we want to talk about this evening, and none of them really have much to do with the Vancouver Canucks. We do that enough ’round these parts.
Let’s get into it!

Tage Thompson is a freak

This one is firmly in the “we thought this was really cool and need to make sure you’ve seen and read about it too” category.
A freak, a unicorn, an enigma, whatever you want to call him, it’s hard to miss what Tage Thompson is doing in Buffalo this season.
On Thursday night, Thompson scored his 24th goal of the season, and as is customary with his goals, it was the furthest thing from a greasy goal.
The stickhandling displayed here by the 6’7 25-year-old is just absurd.
Anyway, that’s the cool, happy, and fun part of today’s column. Now we’re getting a bit more serious.

Canucks fans are familiar with being confused by the NHL’s rule book.
Joining them in that club is Edmonton Oilers captain Connor McDavid, AKA the face of the NHL (depending on who you ask).
On Thursday night in the Oilers’ game against the St. Louis Blues, McDavid carried the puck across the Blues’ line with just under three minutes to go in overtime, kickstarting an offensive zone possession that ended in Leon Draisaitl finding the back of the net. Oilers win!
Or so they thought.
A review of the goal was initiated by the NHL’s situation room and it was called off.
Here’s the play that was ruled offside:
Here’s what the NHL said was the reasoning behind their ruling was:
“Edmonton’s Connor McDavid preceded the puck into the offensive zone without possession and control and, therefore, was in an off-side position prior to Leon Draisaitl’s goal.”
Seems simple enough!
McDavid, however, wasn’t having it.
“The league has got to clarify some of these rules. What’s a kick? What’s offside? What’s goalie interference? It kind of depends on the night I guess,” said a clearly frustrated McDavid after the game. “Since I was a kid, I thought if you had possession of the puck it’s onside. We just want some clarity on some of these rules. We’ve been burned on a few kicks and stuff like that. Calgary had the situation last year in the playoffs.
“It kind of goes back a long way not understanding some of the rules of our own game. It’s kind of funny I guess.”
Now, the Oilers went on to lose in a shootout, so that clearly added to McDavid’s frustration post game. Regardless, when the face of your league, the player who nobody is surprised to see is leading the league in points, questions your rule book and calls it “funny” that players don’t understand the rule of the game they’re playing at the highest level, it may be time to look inward.
Goalie interference was a hot-button topic in Vancouver for a couple of days after Conor Garland had a goal called back last month, and this is just another one where even the players are a bit confused.
To be fair, McDavid didn’t really seem like he had control of this puck at all after being stick checked by Ryan O’Reilly, even if his comments suggest that he did.

According to a report from ESPN’s Greg Wyshynski, the NHL is considering expanding its schedule to 84 games.
The idea behind the move is to help create more regional rivalries after some teams in the league apparently complained about an imbalanced schedule against rivals.
Here’s some of what Wyshynski had to say in his report:
“The addition of two regular-season games would allow the NHL to keep its current schedule format, which sees every team visit every opponent at least once, while giving divisional rivals four games against each other every season. One theory is that the preseason schedule could be shortened to compensate for the additional games. Games against divisional rivals typically draw larger crowds and bigger audiences on national and local television. “They could play Calgary in Edmonton 10 times and sell them all out. It’s crazy,” said one NHL general manager.”
Now, the Canucks don’t really have a rival in their division. The Seattle Kraken are their geographical rival, but that rivalry hasn’t taken off as of yet, and likely won’t until the two teams meet in the playoffs.
And who knows how long it could be until that happens?
Editorials
Recent articles from David Quadrelli