NHL Draft: Who’s rising, who’s falling, and how it affects the Canucks at pick number 15 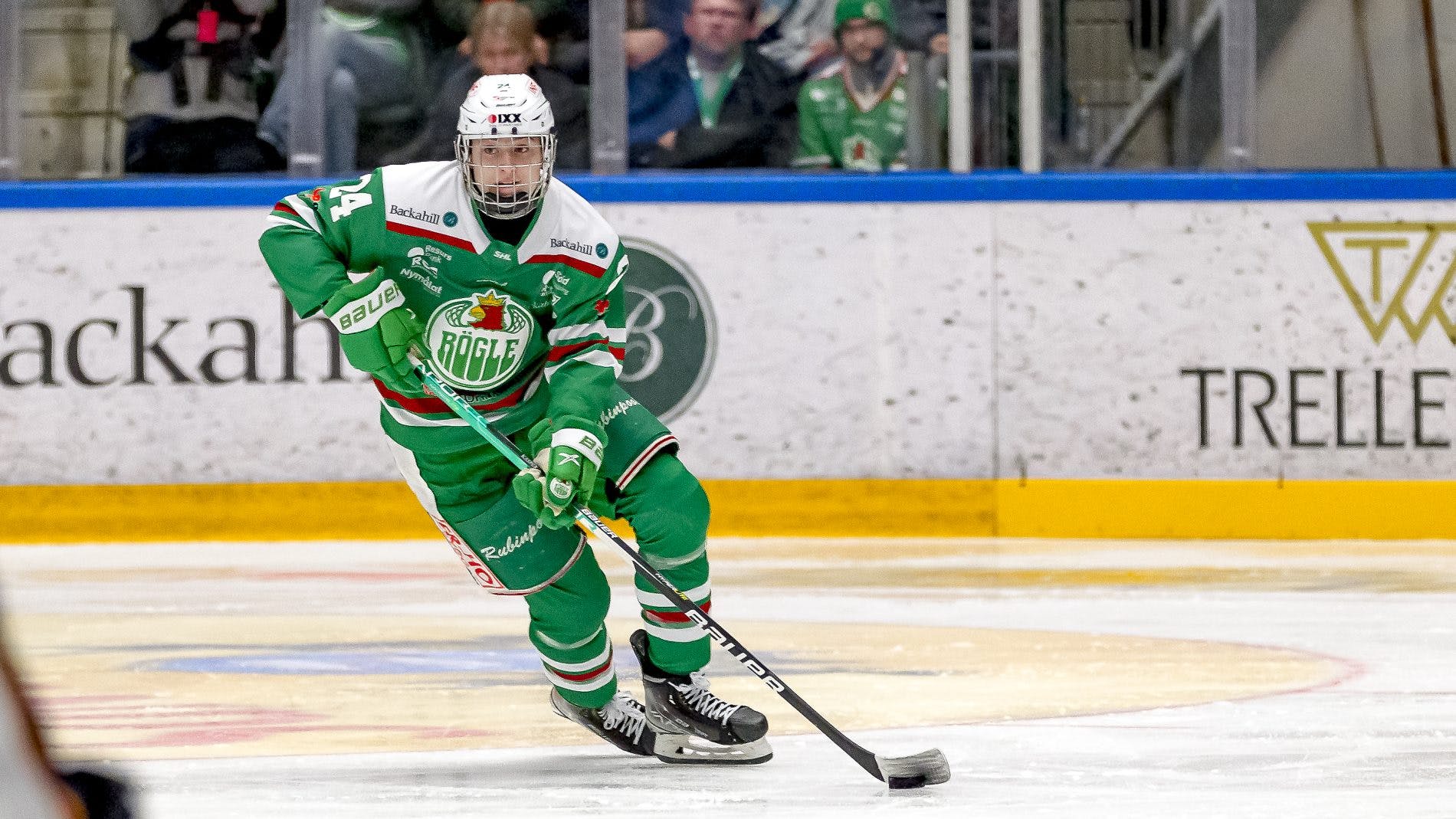 By Faber
7 months ago
This is the busiest time of the year for prospect coverage. There are a lot of conversations being had about prospects and everyone has an opinion on who they like and who they could pass on.
We’ve been having a lot of talks with talent evaluators and scouting experts in regards to the options that the Canucks have with the 15th overall pick in the draft.
In this article, we are going to explore some of the players that we hear are rising and falling as final rankings begin to trickle out. We will also look at how the movement in the player’s evaluation affects the Canucks at 15th overall.
Let’s get into it!

Once predicted as a solid pick for the Canucks at 15, it feels like Marco Kasper is going to be off the board by the time the Canucks brass takes to the podium.
Kasper had a very impressive playoff run and it feels like scouts caught up on the tape and were wowed with Kasper’s play in the postseason. He was given a bigger role with his SHL team in the playoffs and absolutely knocked it out of the park. Kasper likely has the best drive to influence play in this draft. He is an active forechecker, strong in his own zone and hopes to play more centre next season after primarily being used as a winger in the SHL last season.
We spoke with his head coach at Rögle BK and the chances of seeing him play centre next season are created because of how much they already trust Kasper’s defensive play.
He skates well, has a decent shot that should improve before he comes over to North America, and played a very physical brand of hockey as a 17-year-old in the SHL last year.
It won’t be long for Kasper to make his way to the NHL and if he is sitting there for the Canucks at 15, this is the type of player you do want to draft because of the best player available mentality. Trading down has to be an option but if Kasper is there at 15, drafting him could very easily be the better decision.

The size is exciting and his tape gets you even more excited about what Owen Pickering can do if he continues to develop his game.
Pickering played in the WHL with the Swift Current Broncos this past season and got an opportunity to play with Canada’s U18 team — where he quarterbacked a power play with his big shot.
Obviously, the size is a big selling point with Pickering but once you see him skate, you begin to get very excited. It’s not just about how he skates up ice with the puck but scouts love his ability to break out the puck with his calm passing ability as well. When we spoke to Pickering on the Canucks Conversation podcast, he mentioned that he built his game on the back of being a smaller, puck-moving defenceman but then happened to have a huge growth spurt and quickly became a 6’5″ defenceman. Pickering’s skill with the puck is a tremendous asset in a similar way to a basketball prospect who was a point guard growing up and then grew to a small forward size.
There’s still so much rawness to Pickering’s game as he could be one of the players with the highest ceilings in the first round but doesn’t have the highest floor like a lot of top-20 projected prospects.
Pickering is still showing up late in the first round for some projections but we loved the person and the player definitely has one of the highest ceilings in the draft. He could end up being the most complete left-shot defenceman in this draft if he can get with the right team to develop him correctly over the next two or three years.

Funny enough, Denton Mateychuk is the cousin of the previously mention Owen Pickering. Mateychuk’s tape with the Moose Jaw Warriors of the WHL is the reason why he is rising in the ranks and is beginning to show up in some rankings’ top-10.
Though he is under six feet tall, he doesn’t look small at all. He is already a built player who might be the best pure puck-moving defenceman in the draft. He was nearly a point-per-game defenceman in his draft season with 64 points in 65 games. There’s so much to like about Mateychuk, there Canucks fans might not even want to begin to get excited about him potentially being there for the Canucks at 15.
Simply put, if the Canucks are able to land Mateychuk at 15, they need to sprint to the stage and draft him as quick as they did in 2018 when they drafted Quinn Hughes at seventh overall.
Looking at his puck-possession skills, his shot and his ability to walk the line, there’s a real argument to be had that Mateychuk is the best offensive defenceman in the draft.

He is small but he is incredibly quick. Vladimir Grudinin is going to be a very interesting player to watch in this draft. He was ranked 53rd on the NHL Central Scouting’s European skaters rankings but the tape is being consumed and could bring a lot of value in a pick if he’s available in the 30-55 range.
Grudinin shouldn’t be in the conversation for the Canucks at 15th overall but if the team does want to go in the direction of trading down, Grudinin is a player they should take a long look at with the added second-round pick that they would likely receive in a trade-down situation. With questions about drafting Russians, Grudinin may even slide harder down than we believe his skill should. We say this with confidence, if Grudinin slides into the third round, some team is going to have an early favourite for the steal of the draft.
He was able to get into six KHL games this season and did put up a single point in that stretch of games. Grudinin was one of the two draft-eligible defencemen to make the Russian world junior team at this past December’s World Junior Championships.
If the Canucks add a second-round pick from a trade down, Grudinin is worth a swing in the second round. He isn’t as high risk as Danila Klimovich was in the second round of last year’s draft but he does have a higher ceiling than Klimovich — even if he lacks the size.

Brad Lambert has fallen out of the top-five, is a risk to take in the top-10 but still has enough pure talent to be a solid pick for the Canucks if he slides down to 15th.
It has been a down year for Lambert, who produced less than he did two years ago. There’s some unluckiness there but also some questions about his style of play. An easy way to put it is that he attempts moves like he is a generational player but isn’t able to pull it off. Lambert has exciting hands but they lack consistency and it seems like he needs to make adjustments to his style of play before he becomes a successful NHL contributor.
On the positive side, Lambert is an incredible skater. His quick cuts and great acceleration help create space for him in the Finnish top league. He has accurate passes that open up from his strong puck-handling skills.
If the Canucks are on the clock at 15 and Lambert is sitting there, this opens up a very interesting situation. You’d have to imagine that teams would be interested in trading up to 15 to draft a player like Lambert but the question would be if the Canucks like him enough to think that he is a slam dunk [pick at 15.
There are definitely parts of his game that get you very excited and when he plays against players in his age group, he looks like a tremendous attacker. You worry a bit about his production this year and why it took a step back after his 16-17-year-old season but if he is the one who the Canucks walk out of the first round with, you’ll be excited about the upside.

Possessing one of the best shots in the 2022 draft class, Jonathan Lekkerimaki saw his stock rise a ton after putting up 15 points in six games at the U18s. Since then, his tape has been ripped through and he may not be a top-10 talent as much as he looked like one at the U18s.
We still very much like Lekkerimaki’s game but just feel that there are players with higher ceilings and floors who will be available for the Canucks at 15. He just feels like a winger who projects the same as every winger we see ranked in the 10-25 spots of the draft. Lekkerimaki could very easily end up being a middle-six NHL winger who gets time on a power play unit. He earned a boost up the rankings from his U18s performance but is coming back down to earth when you watch his tape in the SHL.
There are a handful of very good games from Lekkerimaki when you watch the tape but there are also more than a handful of games where he is not noticeable. His possession numbers were not good in the SHL but he did end up playing 26 games and averaged over 10 minutes of ice time through those 26 games.
Lekkerimaki shines when he plays with players his age and it should be noted that his SHL team was one of the worst in the league this past season. Lekkerimaki has a tremendous shot and the scouts do love what he can do with the puck on a power play. We will have to see where he falls in the draft but after making a push for the top-10, he is now slotting in the 12-18 range. This could be a player who catches the Canucks’ eye but could also be a nice target for a team to trade up to the Canucks’ 15th overall if he is available.

The stock was rising for Sam Rinzel all the way up until he began playing in the USHL. Rinzel looked like an absolute stud when playing in high school hockey and his combination of size and position makes him an exciting prospect. The unfortunate thing is that his skill didn’t stand out as much once he made the jump to the USHL. He finished with two goals and eight assists in 21 games
We believe that Rinzel is still potentially a first-round talent but there are a lot of recent rankings that have him outside of the first round. 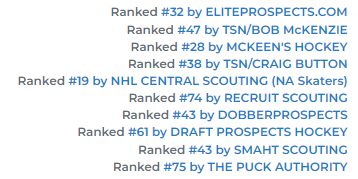 He’s a big, right-shot defenceman who can skate and handle the puck. Rinzel could be an option if the Canucks are able to grab an extra second-round pick. We get a very similar vibe to Scotty Morrow from last year’s draft but believe that though Rinzel is slighter, he does bring more physicality than Morrow.
If the Canucks can snag Rinzel with a mid-second-round pick, that would be a huge addition to a position of need in the prospect pipeline.
That wraps up our who’s rising and who’s falling article. We will continue to bring draft coverage for the upcoming event and will start to dig deep into the most likely options for the Canucks to draft at 15th overall. That will be a series that we run in the two weeks approaching the draft and I’m excited to spearhead the series of articles.
Uncategorized
Recent articles from Faber