NHL Central Scouting releases final rankings for 2022 Draft: Here’s who could fall to the Canucks 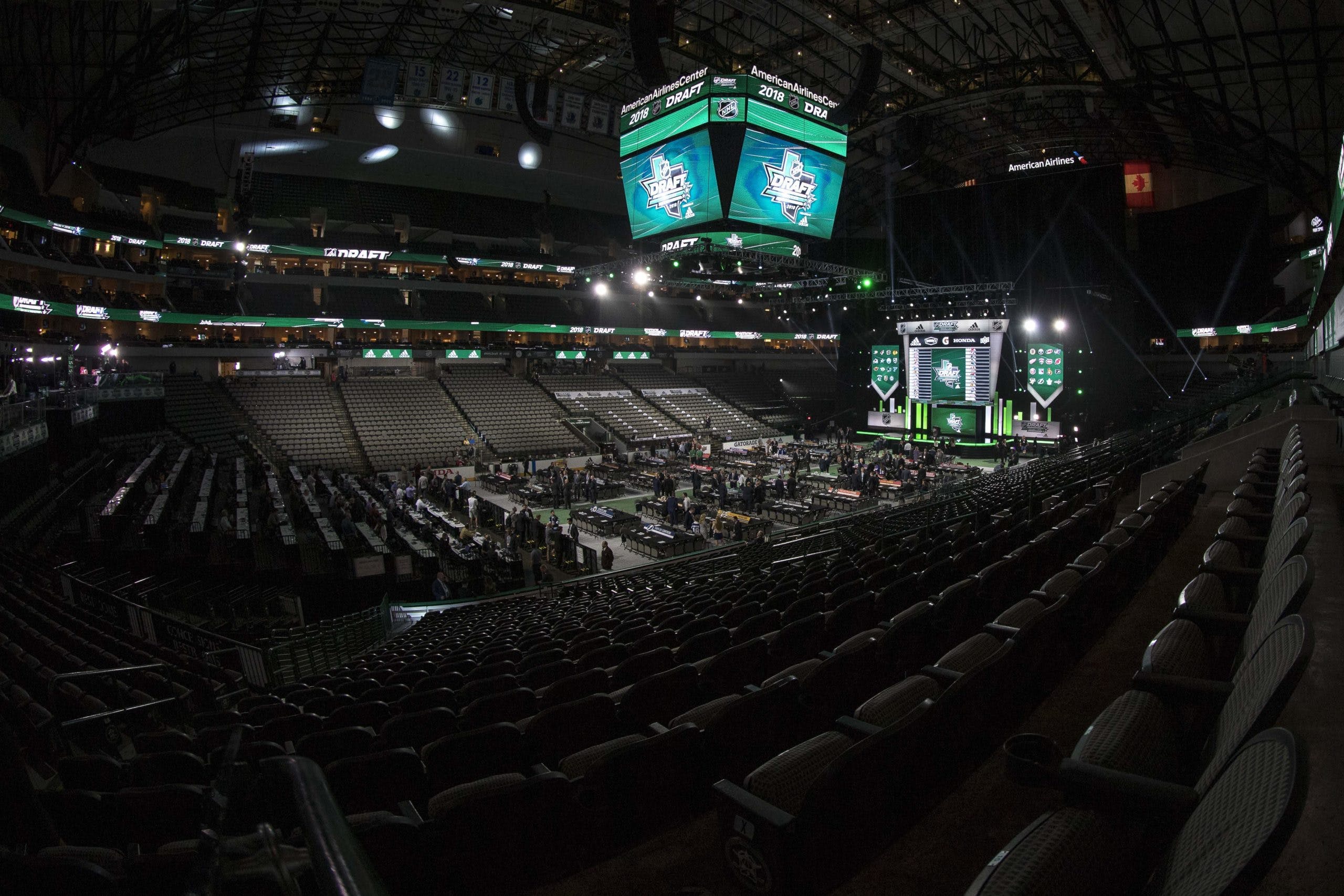 By David Quadrelli
7 months ago
Every year, NHL Central Scouting releases their pre-draft rankings of the upcoming draft class.
The rankings are split it into two lists for skaters: North American and International skaters.
Here’s the list of the top 28 North American skaters: 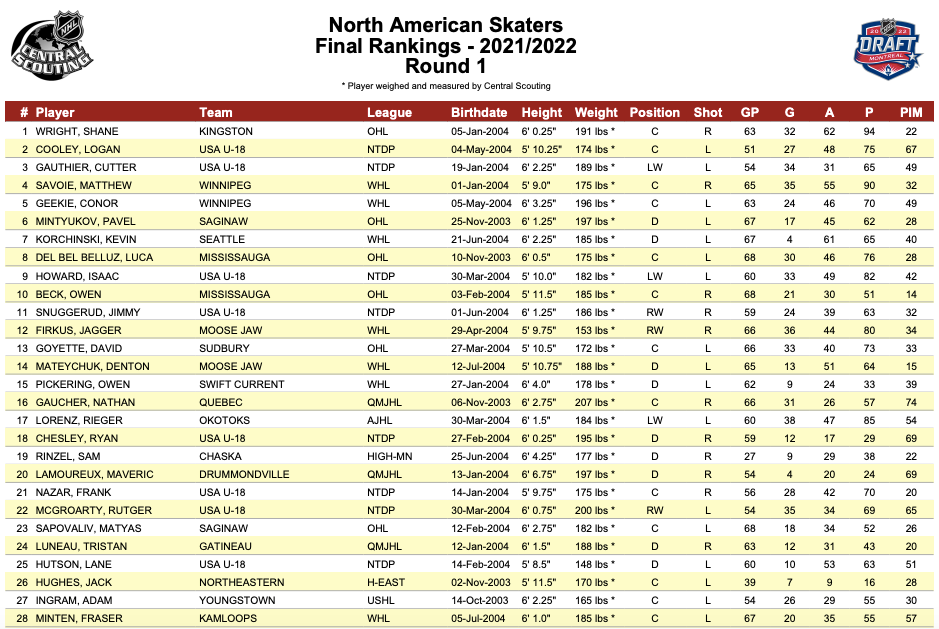 And the top 24 International skaters: 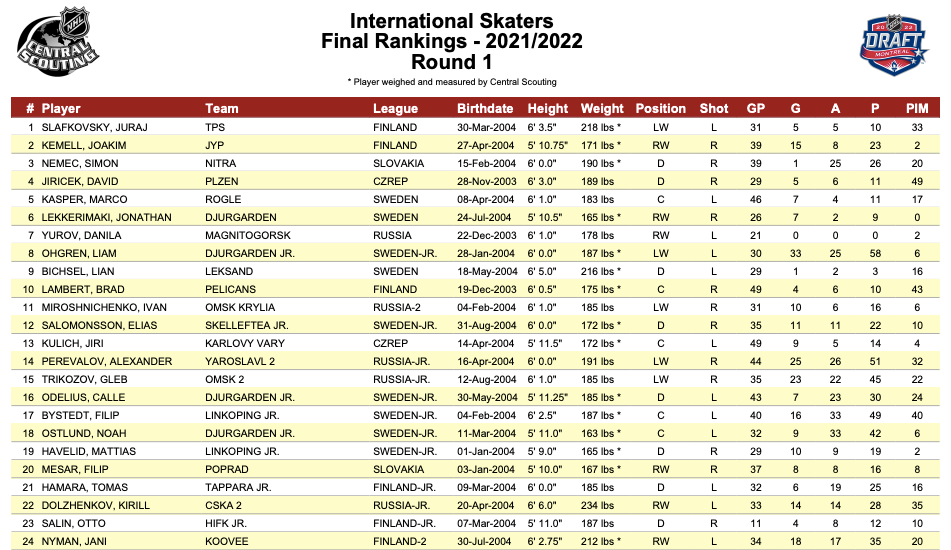 Our friends over at FC Hockey have created a full draft ranking with skaters from both of these lists, and here’s who they see being available from 12-18 (which is most likely the range where the Canucks will be selecting.)

FC Hockey: McGroarty is an underrated, highly competitive scorer. He screams a player that will go higher than expected on draft day. He has such a specific profile that many NHL teams will covet. While he’s known for his goal-scoring, his strength may be a defining factor to his game. He’s extremely strong on his feet and definitely isn’t afraid to hold his own and throw his body around.
Smaht Scouting: Much like his teammate Cutter Gauthier, Rutger McGroarty is an offensive-minded power forward, who excels at just about everything in the attacking third of the ice. Not only is he capable of using his offensive prowess to generate high-danger chances in the offensive zone, but he makes trying to defend him an absolute nightmare for opponents. McGroarty is an absolute weapon in the offensive zone. His playmaking skills are next level, and he can generate chances from just about anywhere in the attacking third of the ice.
Dobber Prospects: McGroarty plays the game with pace and works hard away from the puck. He has a balanced offensive skillset that allows him to facilitate, finish scoring plays, and create chances with his slick puck-handling.”

FC Hockey: Gauthier is a skilled winger with a silky set of hands that has a nice combination of playmaking and scoring ability. He set up his linemates numerous times with some nice passes, with some even leading to some great scoring chances. He’s aware of where his teammates are at on the ice when he has the puck, making him a real effective setup man.
Smaht Scouting: There’s a certain level of physicality that a true “power-forward” brings with his game, and Gauthier is certainly capable of that. He’s able to consistently out-muscle attackers off the puck in the defensive zone, or he can force an offensive zone turnover for the opposing team by delivering a booming bodycheck. When you combine Gauthier’s ability to be physical in all three zones of the ice with his ridiculously impressive skills in the offensive zone, it gets you a player who is relatively hard to come by in the 2022 NHL Draft class.
Dobber Prospects: Gauthier does a lot of things well, but his standout tool is his shot. He works hard off the puck and utilizes his teammates well to get himself into space for scoring chances. Probably not a game-breaking talent but I see him developing into a solid complementary player who can provide secondary scoring.

FC Hockey: Geekie is a frustrating prospect to watch and follow because his talent level is obvious but he only fully applies himself in spurts. He has what it takes to be a dominating force at this level, but too often seems content to sit back and let shifts pass him by. His combination of size, puck control, playmaking, shot, and offensive awareness is tantalizing and rare.
Smaht Scouting: Geekie is an elite playmaker and possesses high amounts of skill with the puck on his stick, giving him the ability to create offense at an impressive rate. Geekie can do things with the puck that few other skaters his size can, which will undoubtedly make him one of the most talked about players heading into day one of the 2022 NHL Draft… A player whose skating handicaps him in transition and limits his effectiveness both on the rush, the forecheck, and the back check. I have concerns about Geekie’s projectability to the NHL that I hope to illustrate in this profile. I’m fairly confident hat Geekie will play NHL games, but I have concerns about how he’ll slot into an NHL lineup.
Dobber Prospects: High-end offensive talent with great size who can beat opponents with his hands, vision, or shooting ability. Needs to clean up his skating stride and add some pace to his game but has potential as an impactful offensive weapon in the NHL.

FC Hockey: Trikozov is one of the most dynamic offensive talents in the draft. His combination of size, speed, and skill makes him one of the most intriguing prospects in the class. His shot is powerful and accurate, making him a constant threat to score from distance. His ability to control the pace of play has really grown this season.
Smaht Scouting: Will he blow you away with his defensive play? There are times, but it’s not consistent. But, where he does shine is in the neutral and offensive zones. His stick-handling ability will improve and he will be a pain in the rear for attackers who struggle to defend against flashy stick-handling. Trikozov can carry his own line and has proven at the MHL level that he is slightly under matched. There are games where he doesn’t exert aggression and play tight to the vest hockey on the forecheck, but has shown that he has the speed and the capability to do so at the VHL level. If everything goes according to plan, I feel confident that you are getting an impact top six forward with Trikozov at the NHL level. He is a prospect who I would bet on at the 2022 NHL Draft.
Dobber Prospects: Well-rounded, intelligent offensive player with a heavy shot and good vision. Has the potential to develop into a solid middle-six forward in the NHL.

FC Hockey: Lekkerimaki is an electrifying offensive winger, and it’s easy to get excited about his potential as a key offensive contributor at the NHL level. His pacing and attack mentality are excellent, as he plays with a ton of energy and tries to channel it towards his killer instinct as a scorer.
Scott Wheeler, The Athletic: He has progressed rapidly, quickly becoming a dynamo inside the offensive zone and on the power play. He’s got a knack for hitting holes in the net, frequently beating goalies low-blocker and five-hole.
Dobber Prospects: Great goal-scorer with very good upside. Threat on even strength and PP. Has a good toolkit all-around. Needs 1-2 years before jumping to the NHL.

FC Hockey: He’s one of the best skaters in the class and never takes his foot off the gas. The Moose Jaw Warriors defender shows very strong offensive awareness, always seemingly looking to jump up into the rush. But is a very strong presence in his own zone as well, forcing turnovers and leading the transition game.
Dobber Prospects: Mateychuk blends elite skating ability with good vision and intelligent reads to drive play from the back end. He picks his spots well but has been more engaged offensively this season and his production reflects that.
Smaht Scouting: In a draft that seems to be chocked full of offensive-leaning defensemen: Mateychuk deserves to be in the conversation as one of the best offensive generators coming from the backend in 2022 given his production and being one of the younger defenders in the draft.

Dobber Prospects: He’s a big center who controls the puck well down low and finishes well in tight. However, I think he probably settles into a long time middle six role, as opposed to being a top point producer.
Scott Wheeler, The Athletic: He doesn’t shy away from trying to beat or out-wait guys (whether through changes of directions out of stop-ups or curls) and he’s got a really low panic threshold. He’s also a good skater who never lacks in effort and always stops on pucks.
FC Hockey: Kasper is a speedy and skilled forward who is able to contribute offensively due to his willingness to play in high-danger, dirty areas of the offensive zone. What stands out immediately in Kasper’s game is his top-flight mobility and willingness to push the pace of play when the puck is on his stick. He is a very fluid skater who is able to build speed quickly off of his crossovers.
Of course, we’ll have plenty of our own draft coverage leading up to the July 7th draft in Montreal, with Chris Faber already hard at work on some more Scouting with Faber articles.
Uncategorized
Recent articles from David Quadrelli