Monday Mailbag: The under 300 crew, the right line for Jonah Gadjovich, and which Canuck is the best golfer?

By Faber
1 year ago
As the Vancouver Canucks’ season fades away, we come back with another Monday Mailbag. David Quadrelli is busy working on an article that is going to be a great read as I have just seen a teaser of it. He will likely be back next week but until then, you are stuck with me.
We have a lot of questions to get into so let’s fire up the old Twitter machine and see what we got this week.
All I know about the Canucks players’ golf games is that Thatcher Demko has an absolute bomb of a drive and that Elias Pettersson is a new golfer but already has a beautiful stroke.
I’m sure the offseason Vancouver residents on the Canucks’ roster take full advantage of the beautiful courses here in Vancouver and in the Whistler area as well.
Going off of a hunch, I have a feeling that Tanner Pearson and his dad energy makes him an ok golfer.
There’s one thing that’s for sure, J.T. Miller isn’t the best golfer…
Next question.
Well, Jonah Gadjovich has been called up and he will get his shot at some point. He scores a ton of goals around the net so I’d like to see him just get on a line with some guys who funnel the puck towards the net. He won’t be getting a top-six run like Kole Lind, so I’m assuming he will play on the fourth line with Travis Boyd. The right-winger on that line could be one of a half dozen other guys but my favourite has to be Matthew Highmore, I guess?
Highmore will bring energy and that energy can drag Gadjovich into the fight. It’s going to be a quick test for Gadjovich in the NHL. This small sample of him skating alongside NHL players will tell him and the organization a lot about what they can expect from him next season and if fighting for a job at 2021-22 training camp is a real possibility.
He’s done everything asked of him at the AHL level this season and has earned this shot.
First off, I love this question. It’s not something I have thought about a lot and then I noticed the names so I unfortunately got less excited.
These are the players who have played under 300 minutes (of 5-on-5) this season. 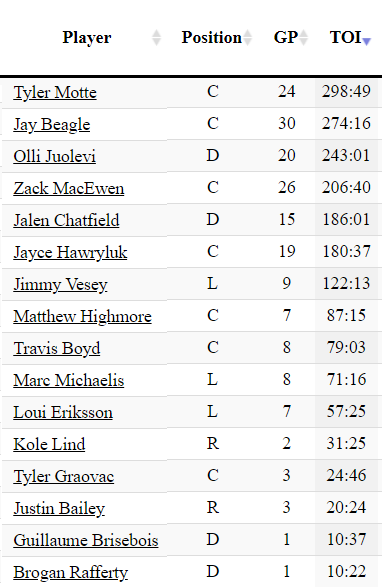 Is it wrong to say Kole Lind?
Because I’m going to say Kole Lind is the most impressive player of the bunch. There’s a case for Jayce Hawryluk, who has looked like a fine fourth-line energy guy this season but it’s got to be Lind even with the small sample size.
Lind transitioned to centre this season and it helped him learn how to be more accountable defensively as a forward. He might not be a centre moving forward but his attention to detail in the defensive zone improved after getting some reps in the middle of the ice. The Canucks shouldn’t immediately forget about his transition to centre. That third-line centre position is going to need to be filled, so the Lind-to-centre experiment shouldn’t end with his AHL career.
It’s hard to predict but sheesh, I really hope by next September that we can be at a place where Rogers Arena can have fans again.
If we get there in the battle against COVID, I think the rink will fill up again.
At the beginning.
After the shiny new feeling of “I’m back at a Canucks game” has worn off, some fans will begin to realize the product that they are getting on the ice isn’t worth paying top dollar for. If the team takes a step back next season, things will be very dark in Vancouver.
The team simply has to be better next season, they absolutely have to. They have gone through so much this year that the hockey gods need to shine a little light on them next year. If the team is contending for a playoff spot, you’re damn right fans will be back to selling out Rogers Arena.
If the team falters, it has the chance for them to fall almost completely out of mind for fairweather fans once again.
Absolutely.
The Canucks need that 3C badly and their first-round pick at the 2021 NHL Entry Draft is a nice way to answer the 3C question.
Matt Beniers seems to be the best centre in the draft and the Canucks will have to have some lottery luck to be able to select him. If they do have some lottery luck, there will be a tough call to make between Luke Hughes and Beniers.
Some other centres include local boy Kent Johnson or going the USA direction with Chaz Lucius or Cole Sillinger. Also keep an eye on lesser-rated forwards like Francesco Pinelli, Logan Stankoven and Mason McTavish.
One thing to look forward to is the emergence of Thatcher Demko as a true number one goalie. If this Canucks team is going to do anything with their core, Demko is going to be the guy in net for it. Demko has proven that he can be the best player for this Canucks core on a consistent basis and that is great news for a team that relies on their goaltenders so much.
Vasily Podkolzin is going to be something special, and fans will love him immediately. His impact will come from his effort level and with it, the points will follow. Podkolzin is a crucial piece for the Canucks moving forward. He could find chemistry with Elias Pettersson and Brock Boeser or round out a line with Bo Horvat and Nils Höglander. Worst case scenario, he is playing on a third line with potentially Brandon Sutter or a new 3C moving forward.
Podkolzin is going to kill penalties immediately and be a forechecking machine. His playmaking ability is sneaky good and that’s where a majority of his NHL points will likely come from. That, and his clutch playoff goal-scoring.
Thanks for coming by for another Monday Mailbag here at CanucksArmy. We will be back next week to answer all your questions. Be sure to follow on Twitter for the Sunday call for questions!
Uncategorized
Recent articles from Faber