Monday Mailbag: The new guys, Linus Karlsson’s strong start, and guessing which Canucks prospects will sign a contract this year

By Faber
2 months ago
We are back for another Monday Mailbag here at CanucksArmy and the vibes are much better around Canuckland.
The team is riding into a new week on a two-game winning streak after it felt like tanking was the best option for the Canucks after a winless seven-game stretch to start the season.
In the past week, we saw a pair of trades and two of the three acquired players were on the ice with the Canucks at their practice on Sunday morning.
Ethan Bear is going to be an interesting story to follow this season. He is coming in with a $1,800,000 cap hit on the Canucks after the Carolina Hurricanes ate $400,000 of his contract in the trade that saw them receive a fifth-round pick in return. Bear is looking forward to the opportunity that is presenting itself here in Vancouver as the defence corps needs change and though Bear isn’t a massive move and isn’t proven to be a top-four defenceman, he is at least something new and a different type of right-shot defenceman than the Canucks currently possess.
Jack Studnicka looks like he will draw into the lineup on Tuesday as he skated on the fourth line at Sunday’s practice. We will have more updates on him and where he sits in the lineup after Monday’s practice.
We’ve got a bunch of great questions to get to this week so without wasting any more words, let’s dive in and see what the great folks of #CanucksTwitter had to ask this week.
We’ve got a few questions about the new guys, so let’s just take this one and hit on all three.
Let’s start with Bear, who comes into town after not being able to crack the Canes’ lineup due to their strong depth on the backend. Bear had a really tough time with COVID last season and it derailed his strong start to the season. He is now feeling as healthy as he was a year ago when he was playing 18 minutes a night in the Hurricanes’ top four.
The hope is that he can find a role with this Canucks team and be a piece to rely on moving forward. His contract expires after this season and he will be a restricted free agent.
My take is that Bear will get into the lineup at some point this week and be a player who sticks and plays 14-20 minutes a night. It will be interesting to see how the defence gets shuffled, but I’d imagine that Bear is one of the top-five defencemen on this team within a few weeks of getting comfortable. This will make for some tough decisions regarding Jack Rathbone, Kyle Burroughs, and Travis Dermott (once he is healthy).
Lane Pederson was probably Abbotsford’s best player on Saturday night. We were out at the Abby Centre and he was skating with a good amount of pace, forcing turnovers, and was a part of both Abby goals in the game as he scored and added an assist.
He seems like a good AHLer and could be a call-up option similar to Sheldon Dries or Will Lockwood this season.
Jack Studnicka looks like he will be hopping right into the lineup on Tuesday and playing centre on the fourth line. He’s a bigger body than Sheldon Dries, is a right-shot, and says that he learned a lot from being around the star centres that the Boston Bruins have had in his time with their organization.
I don’t know how he will impact this team in the long term but he’s still only 23 years old and signed through next season at under $800,000. Let’s see how he looks while Curtis Lazar is out with an injury. Maybe Studnicka can become the 13th forward for this group.
You have got to ride with Thatcher Demko, no matter how good Spencer Martin played on Friday night.
We’re still a ways away from a goalie controversy in Vancouver but Martin has done nothing but impress in his time as an NHLer. He has gotten a point in each of his eight games and has been all you could ask for in the role he is in.
Bruce Boudreau has said that it will not just be back-to-backs when we see Martin. Expect him to get a few more games over the next month but I’d be surprised to see him play in consecutive games unless Demko really needs time to work on something with Ian Clark or nurse a minor injury.
Linus Karlsson has looked great in the AHL this season. I had concerns that his skating was going to be the thing that limited his ability to have success here in North American pro hockey but he has shown such a high level of intelligence in how he positions himself to create offence. There’s a lot to like about his shot, his playmaking, and the most surprising thing I’ve seen this season is his strength. Karlsson seems bigger than he looked on SHL ice and isn’t shy to use his size and strength to get to the net.
Before the season began, I wouldn’t have thought he’d be one of the top call-up options from Abbotsford as the team has Phil Di Giuseppe, Sheldon Dries, and Will Lockwood in that role, but if the Canucks need someone new to come into their top-nine, I’m leaning towards Karlsson at this point.
Karlsson has been the most productive player in Abbotsford up to this point in the season and it’s not just power play points, as some may have expected. Karlsson is creating offence at even strength and looking more than solid in his own zone with and without the puck on his stick. 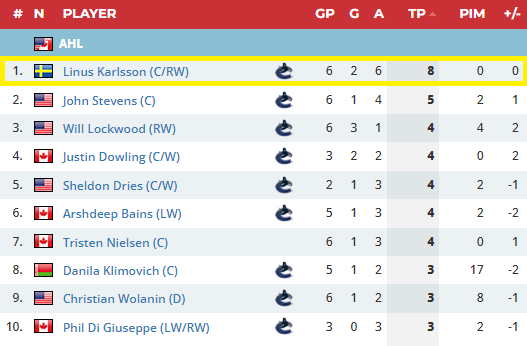 He’s leading the way in points right now and scored a very pretty goal on Friday night at the home opener.
He’s been good. Better than expected.
The DAWG formula is a top-secret mix that will not be shared any time soon.
When I finally found the right mix of stats and created this formula, I had no idea it would be as accurate as it has proven to be up to this point. Kyle Burroughs and Luke Schenn have been near the top for the Canucks in every game this season and we’ve seen J.T. Miller’s rating rise ever since he was moved to the wing.
Someday the formula may be released but this is a CanucksArmy exclusive right now and we are going to keep it here in The Stanchies for the time being.
I’ll get the two that won’t sign out of the way right now.
I don’t see the Canucks giving Matthew Thiessen or Arvid Costmar a contract. Neither of those two players has progressed at a level that has warranted a contract but the other two names, as well as a few more that I’ll bring up, are some to keep an eye on.
Aidan McDonough is an absolute slam dunk for the Canucks to offer a contract to. He’s one of, if not the best scorer in the NCAA and he could be a top-scorer on their AHL team and potentially even get some NHL time as soon as this season.
McDonough made it pretty clear to us back in May that his plan is to sign with the Canucks after his NCAA season.
The quote says exactly that.
“My plan is to sign with Vancouver at the end of my NCAA season,” said McDonough in an exclusive interview with us five months ago.
However, plans can change, and we have heard whispers that the big winger might not want to sign with the Canucks. The tough part is balancing those rumours with the words he said to us during that interview. As much as it’s a slam dunk for the Canucks to sign McDonough, it’s ultimately his decision and he would be able to sign with any team in the league on August 15th, 2023. This would mean that he wouldn’t turn pro for the 2022-23 season but could have a fresh start with any organization for the 2023-24 season.
We don’t think it’s a lock that he signs with the Canucks but right now put the odds at something like 80% that he signs with the Canucks and 20% that he will decline a contract and become a highly-touted free agent for the 2023 summer.
Connor Lockhart’s goal this season isn’t about goals or assists in the OHL, his main target for this season is to sign an NHL deal with the team that took a chance on him with a sixth-round pick in the 2021 NHL Entry Draft.
Lockhart currently has 18 points in 12 OHL games. He’s playing on a much better team after being traded this summer and could end up earning a contract at the end of his OHL season. We’re not confident that it happens, but if we had to put a number on it, we’d say there’s a 25-35% chance he signs after this season.
A few more names to keep an eye on are Joni Jurmo and Jacob Truscott.
“Jurmo in Finland and Truscott in Michigan, I believe those are the guys that we’re probably going to make a decision as we move along here,” said general manager Patrik Allvin when asked about potential defencemen turning pro next season.
Jurmo is progressing well in Liiga and is playing more minutes than he did last year while also adding some points.
Truscott has been off to a tremendous start with Michigan. He has one goal and eight assists through eight NCAA games and is being used as Luke Hughes’ partner on the top pairing.
We expect Hughes to go pro after this season and wouldn’t be shocked if Truscott does the same.
We’re putting Jurmo at 25% to go pro and come to the AHL while Truscott is more like 30-40%.
That wraps up another Monday Mailbag here at CanucksArmy. We will be back next week for another instalment of our weekly article taking questions from you.
See you next week!
Editorials
Recent articles from Faber