Monday Mailbag: The 12th and 13th forwards, Podkolzin’s varying height, and the battle of Juolevi vs Hunt

By Faber
1 year ago
We have made it another week closer to training camp as the offseason continues to drag along. We heard from Elias Pettersson last week and that, combined with some AHL signings, was about all the news that we received from the Canucks.
There’s a lot of work being done behind the scenes and we are all just waiting on the Pettersson and Quinn Hughes contracts to get done so that there’s something of substance to talk about. Until then, you’ve got questions and I’ve got answers. Let’s get into this week’s crop of questions from the amazing readers and followers of CanucksArmy.
Well, we’ve come to the part of the offseason where we are discussing the fourth line.
The likely betting favourite option to play with Brandon Sutter and Tyler Motte is Matthew Highmore.
Highmore was used in a middle-six role last season but this year he will be demoted to a fourth-line role. Out of all the lesser-known players who came to the Canucks last season, Highmore was one who looked fine but was still unable to produce much offence. He scored three goals and added four assists in his 42 games between Chicago and Vancouver. With the lessened responsibility and minutes on a fourth line, I’d expect to see an energized Highmore as he looks to be the Yin to Motte’s Yang on a fourth line as they look to have a strong forecheck and be responsible enough in their own zone.
One of the biggest steps up on the competition for Highmore is his ability to kill penalties. Highmore was second out of Canucks forwards in shorthanded ice time after he joined the team on April 20th. It seemed like Travis Green was high on his abilities on the penalty kill and if Highmore begins the season killing penalties for the Canucks, it will take pressure off of guys like Tanner Pearson or Vasily Podkolzin and will allow those two players to blaze around the ice with fresher legs. 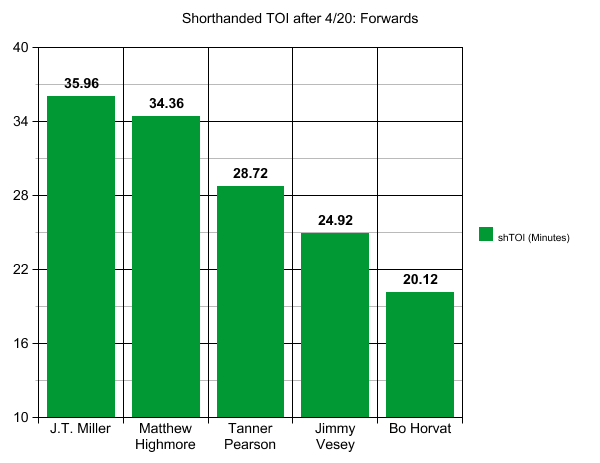