By Faber
2 months ago
The Vancouver Canucks may have begun the week with another blown multi-goal lead, but they followed it up with a strong three-game road trip, picking up wins against the Colorado Avalanche, Vegas Golden Knights, and San Jose Sharks.
Winning five of their last six games has thrown some cold water on the tire fire that was the beginning of the season, but the recent stretch of games has not convinced every fan that this team is in fact good enough to move forward without making changes. Backup goaltender Spencer Martin is now 6-1-1 on the season and if the Canucks can get Thatcher Demko to be back to his top-tier goaltending, this team might be able to get on a serious run here.
It’s true that winning cures everything, but when you’ve lost as much as the Canucks have over the past 10 years, it’s going to take more than a hot week to get this smart fanbase on board with this core being the right group to get this team back to believing.
The right trades should still be looked at for the future, but for now, it’s fine to enjoy watching the home team win some games. I enjoy it, you enjoy it, and even that guy with the Connor Bedard Canucks jersey enjoys it. This upcoming draft is loaded, and would massively benefit the Canucks’ long-term ability to win games if they were somehow able to select in the top five. Winning games and putting up points is surely good for the Canucks when it comes to raising their current tradeable assets’ values.
It wouldn’t take a five-year rebuild if done correctly, and if you cash in while value is high for the first time in this franchise’s history — this team could be competitive in two or three years.
All that being said, enjoy the games, enjoy the wins, but don’t be blinded by the short-term wins if you as a fan want to see this team hoist the Stanley Cup in the next 10 years.
Let’s dive into the mailbag and see what the wonderful people of #CanucksTwitter had to ask this week.
I’d guess that Bo Horvat is the first to go. Aside from Andrei Kuzmenko, Horvat has the easiest contract to move.
At the time of writing this, Horvat is currently second in the NHL for goals, and is still a wizard in the faceoff dot. There’s a ton to like if you are a team looking for a rental. There’s even an additional market for teams like Boston or Columbus, who would presumably be looking to execute a sign and trade to keep Horvat around for the next seven or eight seasons.
There could be a decent return for Conor Garland or Brock Boeser, but Horvat is going to net you an absolute haul if he is moved in the coming months. Horvat is currently atop Frank Seravalli’s trade targets list, and the title of that article was, “Trade Targets: Let the bidding begin for Vancouver Canucks’ Bo Horvat”.
Moving J.T. Miller and his extension — which hasn’t even kicked in yet — is going to be difficult. If the Canucks can find a way, that could really benefit this team moving into a true retool.
Another part of trading Horvat that isn’t talked about a lot is the cap flexibility that it creates for the Canucks to be a team involved in other deals closer to the deadline. They may be able to take on some high cap-hit expiring contracts in exchange for added draft picks. This team needs all the help they can get to bolster their prospect pool.
With another year on his deal and a poor start to the season, it’s highly unlikely that a team is interested in taking on Tanner Pearson.
There may be a chance to move him next season during a season when his contract is expiring.
If Elias Pettersson continues to play as well as he has in his own zone through the final three-quarters of the season, he will begin to enter the conversation for the Selke trophy. The Selke is a weird award as it feels like it takes a few years of strong play to really establish yourself as a true candidate to win the award, but Pettersson is absolutely taking steps toward being in that conversation.
Pettersson has played more than 20 five-on-five minutes with 11 different players this season. He has improved 10 of those 11 players’ expected control of goals scored. The only player who doesn’t see improvement when playing with Pettersson is Oliver Ekman-Larsson. 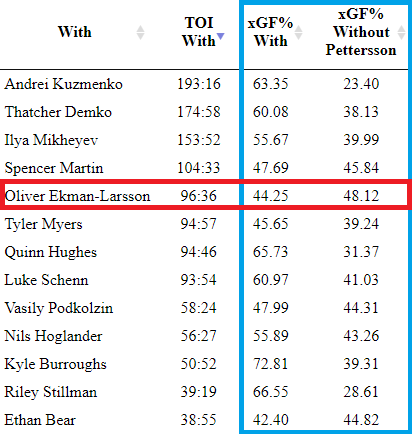 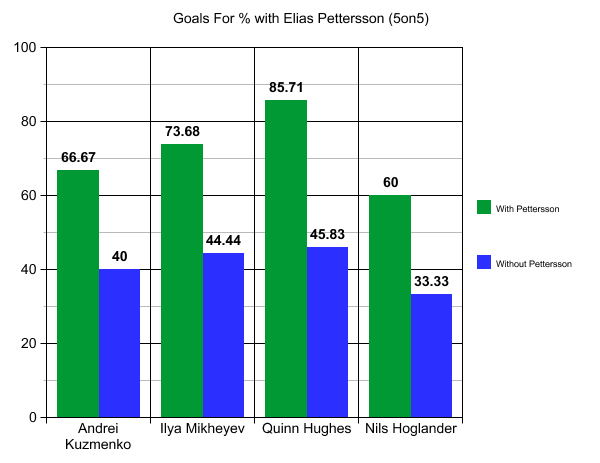 The analytics back up that Pettersson is playing well defensively but certain models also indicate that the control of goal share comes more from Pettersson’s offensive ability than his defensive play. Both ends of the ice have been a strength for Pettersson this season and it may be even more impressive that he is playing such good defence on a team that typically struggles defensively.
He is not likely a top-five candidate for the Selke just yet but Pettersson is definitely getting his name in the conversation with how he’s playing this season.
Though Jonathan Lekkerimäki has had a slow start to the season and took a hit to the head over the weekend that early reports are telling us is a concussion, I’d still stick with him for the Canucks at 15th in the draft.
There are definitely some names who challenge him, and if I had the option of making another pick it would probably be Liam Öhgren, who went 19th to Minnesota.
Even though he hasn’t found his scoring touch just yet, he is extremely skilled and needs to receive the correct coaching to get the best out of him. He’s a hard worker and the skill will shine through in a couple of years, but it’s still too early to really make a concrete decision that there are better options that were taken after him.
Other options that have had a good start to the 2022-23 season are defenceman Owen Pickering, who went 21st overall to Pittsburgh, winger Joakim Kemell, who was selected by Nashville with the 17th overall pick, and Jiri Kulich, who was picked 28th overall and is already up to four goals and 12 points in his 18 games of AHL action.
Yeah, this would be the ideal top-six to create goals in my opinion as well.
The worry is splitting up Mikheyev from the Kuzmenko-Pettersson pair.
Quietly, Mikheyev has been a great addition to the defensive zone for Pettersson. Kuzmenko isn’t really a driver of defence and so far this season, Brock Boeser hasn’t looked as good in his own zone as we’re accustomed to seeing from him. There is chemistry between Pettersson and Boeser and the addition of a good passer and puck-handler like Kuzmenko does excite me for what that trio could do in the offensive zone.
I’m not putting my belief behind this top-six becoming the move for the Canucks’ next game but if you begin to see consistent struggles with the current Pettersson line, this should be what you immediately go to.
It’s been a struggle to find a player to fit in with Miller and Horvat, but Mikheyev’s speed and strength in the defensive zone feel like a good fit there. Boeser hasn’t worked with that duo, and Mikheyev hasn’t seen enough time.
Mikheyev has looked good in his 25 minutes of five-on-five time with Horvat and with the addition of Miller, the trio has a 57.04% control of expected goals in 17:40 of ice time.
I just wouldn’t mess with the Kuzmenko-Pettersson-Mikheyev line right now. Boeser is likely in tough to find time in the top six without either finding chemistry with Horvat and Miller or both of the Canucks’ top-six lines beginning to stumble.
Well, that wraps up our mailbag this week, thanks to all the folks who sent in great questions. We will see what the next week holds and will be back next Monday for another instalment of the Monday Mailbag!
Editorials
Recent articles from Faber