Monday Mailbag: Dickinson’s struggles, and how the Canucks can become one of the most dangerous teams in the league

By David Quadrelli
1 year ago
Another week, another mailbag.
Apologies to the folks who were refreshing the site this morning for the regularly scheduled mailbag. This author had to do almost a complete rewrite of the mailbag that was written before the Canucks’ 6-3 victory over the Dallas Stars last night.
Almost all of the questions were asking about the power play’s struggles and how many more losses the Canucks could put their fans through before changes are made.
It’s only one win, sure, but the Canucks did the right things last night and came away with a victory as a result. This is all to say, it’d simply be weird to come to you this Monday morning and just absolutely drag them.
So with that being said, let’s get into our fresh batch of questions!
The translation of this tweet reads: “How much longer can the Canucks put up with Jason Dickinson at centre?”
When the Canucks acquired Dickinson from the Dallas Stars this offseason, the club had hopes of Dickinson solidifying their forward group with his strong defensive play and two-way abilities. Dickinson can also kill penalties, which was a major boost to his value to the Canucks.
The only issue has been, Dickinson has been far from the best version of himself to begin the new season.
Dickinson is winning just 37% of faceoffs right now, which is not only lower than his worst career year for the stat — 42.9% in 2018-19 — but it’s far below the league average.
The only real positive to pull from Dickinson’s start with the Canucks is that he’s held his head above water at 5-on-5 in terms of chances for and against, and has an even goal share at 5-on-5.
The Canucks have scored two goals with Dickinson on the ice and allowed two goals with Dickinson on the ice at 5-on-5.
But there are some more numbers that paint a clearer picture of Dickinson’s troubling start.
The centre has created very limited offence, and is currently sporting the lowest expected goals percentage expected goals for of his career.
And while holding your head above water defensively at 5-on-5 may seem fine, it’s important to also take a look at the high-danger chances portion of Dickinson’s underlying numbers: 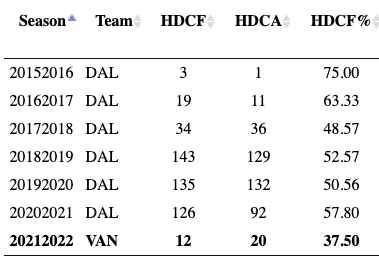 Dickinson is certainly benefiting from the otherworldly play of Thatcher Demko right now. If Demko exhibited more signs of being human, Dickinson’s numbers would be a whole lot worse.
As for Dickinson on the penalty kill? Those numbers are the most troubling of all: