By Faber
1 month ago
Even on the day of the turkey, we are still knocking out another Monday Mailbag here at CanucksArmy.
The regular season is just a pair of sleeps away and the Canucks will soon take the ice against the Edmonton Oilers with points on the line.
Head Coach Bruce Boudreau is optimistic that Boeser is close to returning to the lineup and just needs to be cleared by the doctors ahead of Wednesday night’s puck drop.
For now, Linus Karlsson is skating in the team’s top-nine and the team could really use Conor Garland to bolster their group for Wednesday night’s season opener. He skated today at UBC.
We don’t even really need to mention how important Hughes is to this lineup. This team needs his presence on the back end. He’s missed the last two practices — today’s with an illness.
With the season just around the corner, there are questions about waivers, final lineups, fourth lines and much more in this week’s mailbag.
Let’s see what the people had to ask this week!
When it comes to opening night, the fourth line very much depends on the injury status of Brock Boeser.
We have seen a bit of a rotation of Nils Höglander at times during practice but with Boeser’s status still uncertain, it’s expected that we will see Höglander somewhere in the top nine.
Nils Åman has seemingly won the job and is the surprise fourth-line centre coming out of the preseason.
Boudreau has been impressed with the young Swede’s improvement throughout the past month and his combination of size and speed definitely fits the NHL mould for a fourth-line centre. He’s been strong in the faceoff dot during prospects camp, the Young Stars Tournament, and at times in the preseason, but will be tested in draws when going up against NHL veterans.
Dakota Joshua seems like he will be on the left wing. Joshua is going to bring pace and strength to a fourth line and has good enough hands to find the back of the net when around the crease. The big thing we want to see from Joshua is continuing to be that “hard to play against” type of player. He’s talked about wanting to play that role and this Canucks team needs those types of players.
The right wing spot on opening night is going to be interesting.
On Monday, Höglander skated with Tanner Pearson and J.T. Miller. The returning Conor Garland took rushes with Bo Horvat and Vasily Podkolzin.
We want to see Lazar skate with Joshua and Åman on a fourth line but it seems like Boudreau may be a bit hesitant to put Höglander into his top-nine group.
All that being said, we are expecting the fourth line to be the same on the opening night lineup and throughout the season.
The trio of Joshua, Aman and Lazar brings a lot of speed and tenacity to a line and that’s what we want on the Canucks’ energy line.

The chances aren’t high that Bo Horvat gets traded this season but we do believe it’s a possibility.
After a summer that saw J.T. Miller extended, and the defence did not see any upgrade at all, this team needs to make adjustments with a long-term look at how they can become a perennial contender. This new management group made a decision to sign Miller to a seven-year extension and will soon be challenged to lock down their next best centre in Elias Pettersson once his current three-year deal expires after next year. You want to get a deal done with Pettersson as soon as possible, and with the cap going up, next year feels like the time to strike pen to paper for the team’s best forward.
Horvat has a lot of value on the trade market. He is 27 years old, scored 30 goals last year, and has played against tough competition with weak linemates for most of his career. He certainly helps the team’s depth at centre and gives the group a good one-two-three punch down the middle.
If the right player came up in a trade, the Canucks surely have to explore it. They need to improve the defence and Horvat could be the path to that improvement.
The organization might also believe that Miller, Pettersson or Hughes can become captain down the road. They’ve got Hughes locked up long-term. And this management group is the one that made a big investment in Miller.
There is enough cap space in the future to keep Horvat, and the team likely ends up going down that route. We’re just saying that it’s possible that the Canucks explore their options with Horvat. He’s a captain of a Canadian hockey team and doesn’t have a contract for next season.
These are valid questions to ask and from what we have heard, Jim Rutherford and Patrik Allvin talk about if they can’t get a deal done with their stars, they won’t want them to walk to free agency for nothing. If Horvat’s camp is looking for north of $7,250,000, it might be best to move on from him before the deadline and look to add to the defence corps.
It’s possible, but it’s more likely that Horvat and the Canucks can find common ground and get a deal done for Horvat to be the captain of this team for a long time.
For Seattle Mariners fans, it was pretty amazing.
We’re all bandwagoners anyways.
The Mariners are now BC’s team!
This feels like the year where Elias Pettersson can cement himself in the second tier of superstars in the NHL.
He is going to play a ton of power play time, be fully healthy heading into the season, and is on a bridge deal where he can cash in after the 2023-24 season.
Our expectations are high but from the sounds of Pettersson throughout the preseason, his expectations may be higher.
We guess that Pettersson is in the 33-38 range for goals and sits near 78-90 points.
He is absolutely a long shot to make team Canada but you can’t really argue with Connor Lockhart’s production this early into the OHL season.
Through two weeks of play, Lockhart is tied for the lead in scoring and has been dynamic in the offensive zone with his new team, the Peterborough Petes. 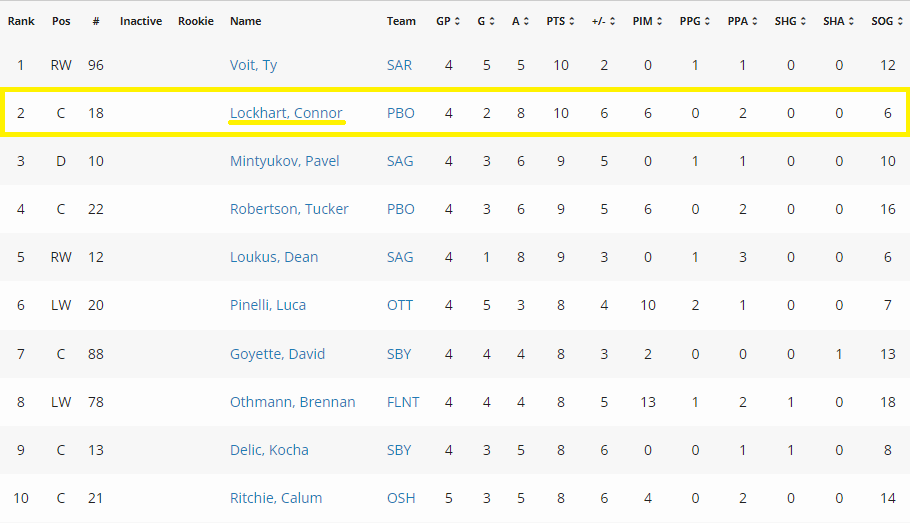 He is surely on Canada’s radar but there are a lot of very talented offensive wingers who will be fighting for a spot to represent team Canada the World Junior Championships.
There’s an outside shot that Lockhart’s name gets into the mix but he is going to need to not only maintain this level of offence, but potentially even find another level and really separate himself from the group of top scorers in the OHL.
That’s a big ask.
He’s got a chance but it’s not a good one right now. We will see how he looks over the next four weeks or so.
The Canucks currently sit 15th on the waivers list. This comes from a reverse of the NHL standings from last season.
As for your second part of the question, a layman like you could find this in the NHL’s CBA, which is publically available but not a fun read.
Here’s the information on your specific question from the CBA in article 13, section 19.

In the event that more than one Club makes a claim for such Player, he shall: (i) be transferred to the claiming Club having earned the lowest percentage of possible points in the League standing at the time of the request for Waivers, or (ii) if Waivers are requested outside the Regular Season, or the successful Waiver claim is made (i.e., the date the Player would be transferred to a successful claiming Club per this Section), before November 1st then the priority shall be determined by the final standing in the League’s Regular Season schedule in the preceding Regular Season.

I’m actually trying to learn more and more about the CBA, so please ask away for mailbag questions and I’ll try to get the information you are looking for!
That wraps up this week’s Monday Mailbag!
Keep your eye out for the call for questions every Sunday or ask away in the comments section here. Use the (#MM) to get my attention.
All the best, and let’s have a fun season!
Editorials
Recent articles from Faber