By Faber
8 months ago
The season has reached its conclusion and is being wrapped up with end-of-season media availabilities and reflection on the year that was.
Here at CanucksArmy, there is no downtime. We will continue to roll through the summer with our articles, which include the Monday Mailbag. There’s plenty of draft talk, trade chatter, and roster discussion to be had and we will look to answer Canucks fans’ questions throughout the offseason.
It was a season we won’t soon forget and will continue to talk about all the way up until this coming fall’s training camp. Luckily, we have a ton of great followers and readers who give us a big dump of questions every Sunday night.
So, without wasting any more words, let’s open up the mailbag and see what the great people of Canucks’ Twitter have to ask this week.
Elias Pettersson has impressed in his short time on the penalty kill. There were only three goals scored against in the 50 minutes of shorthanded time that Pettersson played. He used an active stick and high effort level to keep the puck out of scoring areas for opposing power plays.
The numbers are quite astonishing on how good Pettersson actually was on the PK.
Pettersson had a team-low Corsi against per 60 minutes, shots against per 60, goals against per 60 and was second on the team in expected goals against per 60. 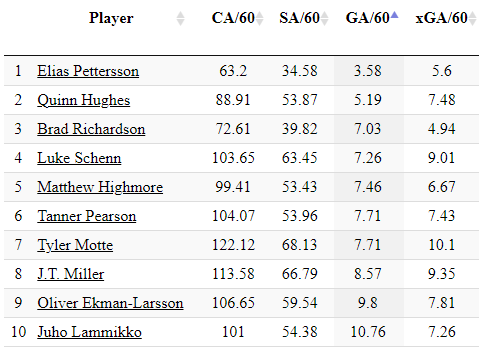