By Faber
1 year ago
After rebuilding his game and making a return to the NHL with the Vancouver Canucks at the end of the 2018-19 season, Luke Schenn is back with the Canucks and is going to bring valuable depth to their defence core.
The 31-year-old right-shot defenceman likely won’t start on the opening night roster but his defensive style of play will make it easy for him to jump into any of the Canucks’ pairings as each left-shot defenceman leans hard towards being the offensive primary puck-mover of their duo.
Whether it’s Quinn Hughes, Oliver Ekman-Larsson or Jack Rathbone, all three of these defencemen will want to be the primary puck mover and that works excellent for Schenn. Last season, Schenn played 65 minutes with Victor Hedman, 77 minutes with Ryan McDonough, and 196 minutes with Mikhail Sergachev. In each of those pairings, Schenn was able to boost their control of the attempted shot share. 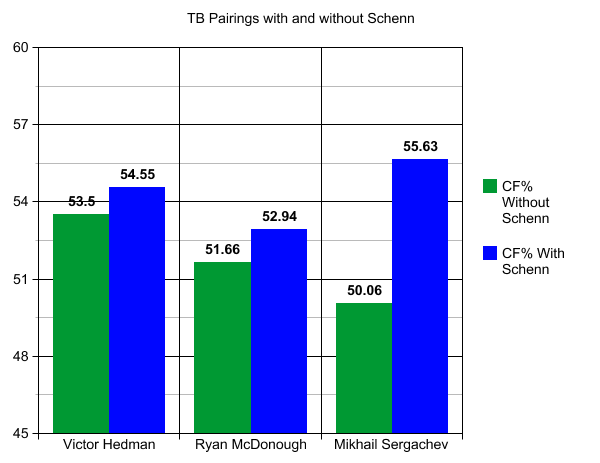 After signing Tucker Poolman and re-signing Travis Hamonic, the Canucks appear to have locked in their right-side defence for opening night. The only open battle appears to be Jack Rathbone with the upper hand as the left side defenceman on the third pairing. Olli Juolevi and Brad Hunt will also be in the mix but to most, it’s Rathbone’s spot to lose.
The addition of Schenn gives Travis Green and his staff options with their defensive pairings if an injury occurs or if they want to give one of the right-shot defencemen a night off. Schenn is a dependable veteran who shows well in his defensive analytics and is a great fit for a young defenceman like Rathbone or Juolevi if he is thrust into action.

Isolated 5v5 impact provided by HockeyViz
The best way to characterize Schenn’s playstyle is to call him a calming presence. He’s not going to bring much offensively but his presence is going to bring toughness to the entire lineup while simultaneously freeing up his partner to play to their offensive potential.
When Schenn is on the ice, offensive defencemen can activate more often and will know that Schenn is always there to defend. We won’t see as many two-on-ones against 21-year-old defencemen.
At $850,000 per year on a two-year deal, Schenn may end up being one of the best offseason signings of Jim Benning’s time as a general manager. It’s cheap money for a player who brings defensive depth to a team that has been lacking depth for years. We will no longer see NHL-AHL tweeners like Oscar Fantenberg, Jalen Chatfield, Guillaume Brisebois or Ashton Sautner.
The Canucks now have legitimate depth defencemen who can slide into the lineup when injuries occur. Schenn is the best of the depth bunch and will be relied upon this coming season. The same can be said for the unproven Juolevi and veteran Brad Hunt.
The Canucks’ defence depth has massively improved and it’s no question who is sliding into the lineup when an injury occurs. We will no longer have to ask about what is going on in Utica, as the Canucks will have their depth chart figured out after camp and when their seventh defenceman is forced into the lineup, you know what you’re going to get.
On top of what he brings on the ice, Schenn is now a two-time Stanley Cup champion and has been an assistant captain in the NHL. He is an excellent speaker in the media and will bring veteran leadership and a winning mentality to a group that is maturing but still can use some guidance. Schenn has had to literally fight for his NHL career.
Depth is a valuable asset and with Schenn leading the way, the Canucks have options with their defence core for the first time in years.
Uncategorized
Recent articles from Faber