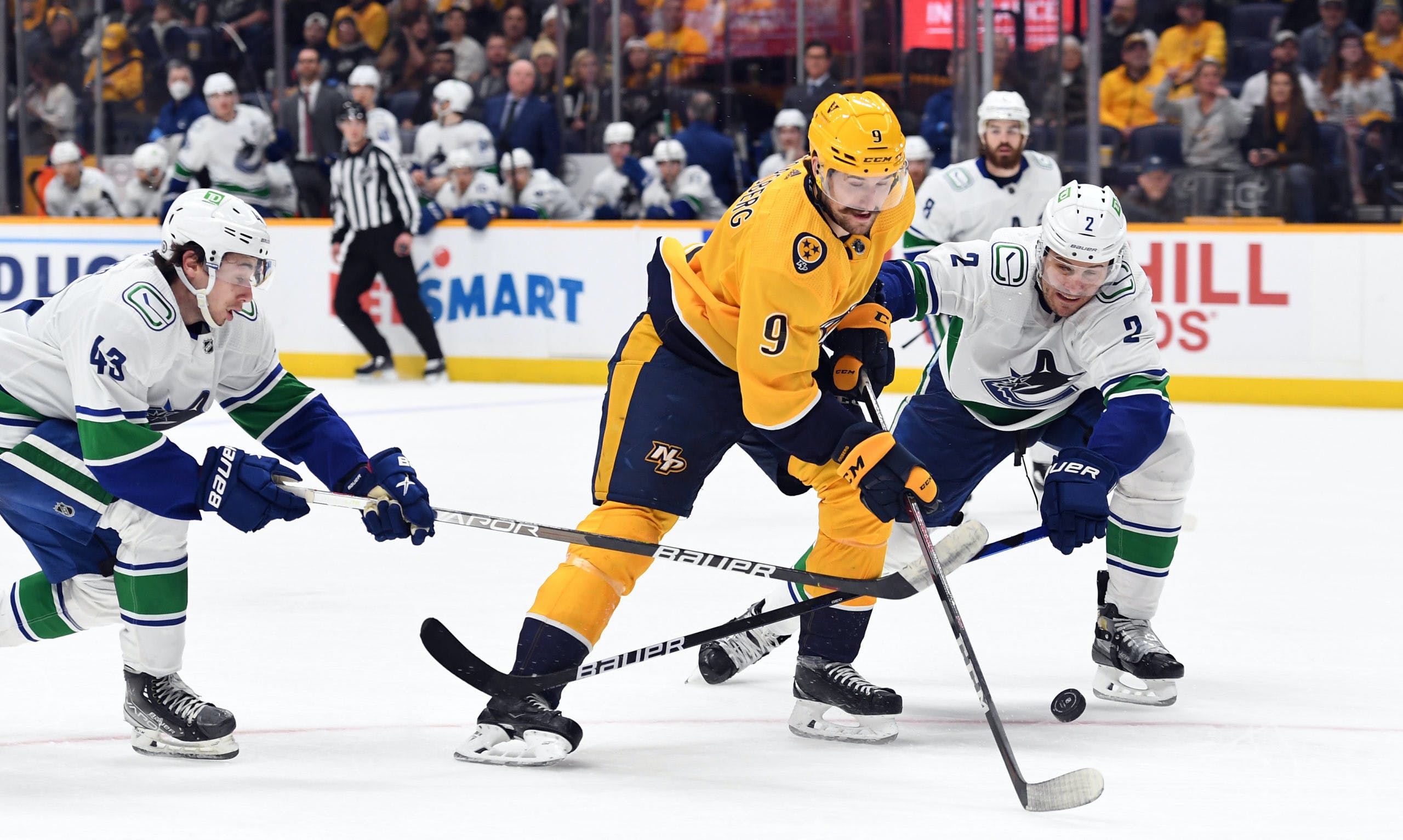 By Noah Strang
7 months ago
Luke Schenn has been a revelation for the Vancouver Canucks this season. The journeyman blueliner has been a solid contributor to the team and has been a reliable partner for star Quinn Hughes.
Schenn’s physical presence has been welcomed on a team that is lacking grit as he’s regularly clearing bodies from in front of the net. He’s currently fifth in the league in hits with 260 despite playing three fewer games than any of the four players ahead of him.
He played 18 games with the Canucks in 2018-19 before moving on to the Tampa Bay Lightning where he won back-to-back Stanley Cups. Schenn is one of the more veteran players on the roster and brings experience that is crucial for the development of talented youngsters.

The Bill Masterton Trophy is handed out every year to the player who best “exemplifies the qualities of perseverance, sportsmanship, and dedication to ice hockey.” There is one nominee from every franchise and Schenn received the nod for the Canucks this season, as voted on by the Professional Hockey Writers Association.
“I’m obviously very thankful to everyone who voted for me,” said Schenn on Tuesday. “When you start to come into the league, you’re kind of oblivious to what it’s going to take to have a long career in the league. You’ve got to continue to put in the work and be supported by a lot of good people around you. And that’s family, that’s teammates, that’s coaches, and that’s organizations.”
Having a journeyman career like Schenn’s isn’t an easy task in the NHL. It’s a physical, cutthroat league that isn’t very forgiving of underperforming players. He was a top-five pick that played for the Toronto Maple Leafs as a teenager but never quite lived up to the high draft pedigree. From there, he bounced around teams before ending up in the minors in 2018.
His fight to get back to regular NHL player status hasn’t been easy. Yet during this second stint in Vancouver, he’s turned himself into a valuable piece and a fan favourite. The organization is lucky that they have him signed for another year at a cap hit under $1 million.

While Schenn has been a useful player in his own right, he’s also provided a lot of value as a partner for Quinn Hughes, both on and off the ice. The two have been the second most used pairing at 5-on-5 by the team this season. While they’re on the ice together, they have a 51.32 CF% at 5-on-5.
“He’s still so young, which is the crazy thing because it feels like he’s been around a lot longer than he actually has,” commented Schenn was asked about Hughes. “The way he can skate his way out of trouble and make those good outlet passes is top of the league and I think defending, he’s gotten so much better off the rush.”
While Schenn spoke highly of what Hughes does on the ice, he was even more complimentary of his attitude and demeanour off the ice.
“I told him on the plane the other day, ‘congrats on that assists record’, and he shrugged it off which is how humble and good he is — where he was more upset about how the game went,” said Schenn. “He’s a team-first guy and he’s probably just going to be breaking his own awards and records for the next decade or so here.”
Hughes’ nonchalance towards breaking the record was evident in his response to questions about the honour after the game against the Seattle Kraken. When asked by the media about the record, he had the following to say.
“Honestly, we were so close and you’re pushing for the playoffs the whole time. That was the dominant thing on my mind because I think it’s so fun winning and I know what it’s like to lose…it [the record] hasn’t been broken in 30 years and there’s been a lot of good players here, so I’m definitely humbled right now.”
Uncategorized
Recent articles from Noah Strang