Looking back to 2014: Jim Benning’s defensive dealings and asset management since 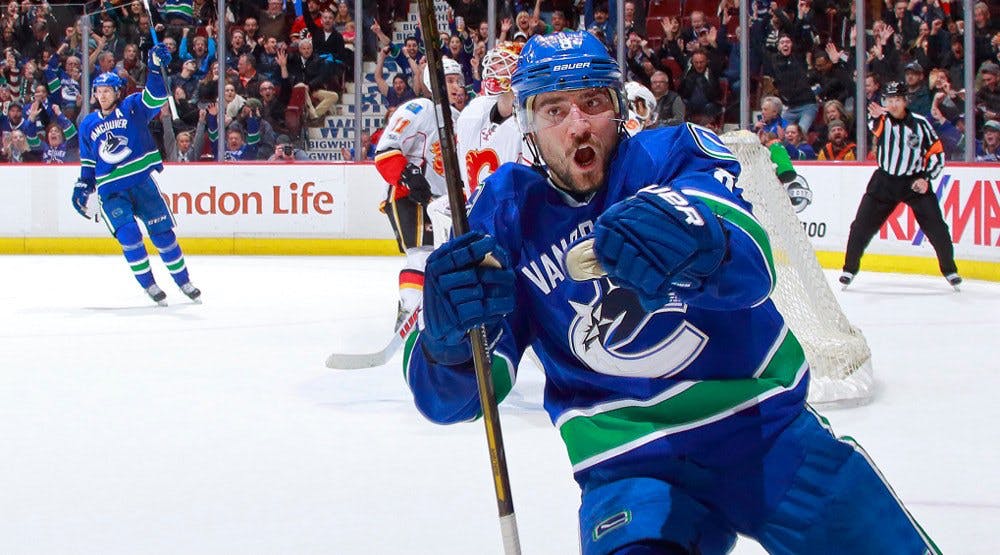 By HockeyNorm
1 year ago
With Alexander Edler signing a contract to play for the Los Angeles Kings in the 2021-2022 season, the last player from the 2011 cup run and the last defenceman inherited by Jim Benning when he was hired as General Manager in 2014 has left the team.
In light of Edler’s departure and some major moves on the back end this offseason, I thought it would be interesting to look back at the defensive group that Benning inherited from his predecessor, and investigate what Benning did (or did not do) with those players.
In 2013-2014, the final year of Mike Gillis’s tenure, the Canucks regularly used ten defencemen – Alex Edler, Chris Tanev, Dan Hamhuis, Kevin Bieksa, Jason Garrison, Ryan Stanton, Frank Corrado, Andrew Alberts, Yann Sauve, and Raphael Diaz. Diaz was traded away at the 2014 deadline, Andrew Alberts suffered a mid-season concussion that ended his career, and Yann Sauve got a cup of coffee in the NHL in 13/14 but hasn’t touched the league since, so we won’t look any further into those players.
The remaining seven players formed what was arguably one of the best defensive groups in the NHL at the time — certainly a top-10 defence in the league that season — and it is worth examining the value that Benning was able to extract from each of those players. To that end, I’ll be doing something of a trade tree — not for an individual player, but for the entire group of defensemen — looking at the value each player had at the time Benning inherited the team, what Benning was able to get for or from each player (whether in trade, games played, or other), and follow the results of any trades to assess what the Canucks have left, seven years out, from that group.

Bieksa and Hamhuis were both still playing at a high level in 2014. Hamhuis, in particular, had just come off a 2014 Olympic Gold with Team Canada but both defencemen were beginning to show early signs of age-related decline. Frank Corrado was in his rookie season and still very much a work-in-progress, though he impressed in his 15-game stint with the Canucks in a sheltered third pairing role. The rest of the group were solidly ensconced in their primes, from Stanton and Tanev at 24 to Garrison at 29. Except for Chris Tanev, who was an RFA, the players were all signed through at least the end of the 2014-2015 season.
Kevin Bieksa – Bieksa was retained by Benning for one more season, in which he played 60 games and scored 14 points. He was then traded to the Anaheim Ducks for a 2nd-round pick in the 2015 offseason, and played three more seasons for the Ducks before retiring at the end of the 2017-2018 season.
The 2nd-round pick Benning received from the Ducks was fair value for the player Bieksa was at the time, and for what he gave the Ducks in the following seasons. The Canucks packaged this 2nd-round pick with Nick Bonino and Adam Clendening in exchange for Brandon Sutter and a 3rd-round pick from the Penguins (the 3rd-round pick was actually the Canucks’ own pick, returned to them). The Canucks then used that pick to select Will Lockwood, who joined the Utica Comets last season and will be competing for a spot on the Canucks’ fourth line this year.
Frank Corrado – Corrado split his 2014-15 season between Vancouver and Utica, playing 10 games with the Canucks and helping the Utica Comets to the top seed in the AHL Western Conference and an appearance in the Calder Cup finals. Corrado was claimed off of waivers by the Toronto Maple Leafs at the start of the 15/16 season. Corrado appeared in 39 games for the Leafs in 15/16 and a further 18 in 16/17, before being traded to the Pittsburgh Penguins for Steven Oleksy, Eric Fehr, and a 4th round pick.
Alex Edler – Mike Gillis had just signed Edler to a $5,000,000 AAV contract through 2019 when Jim Benning was brought on board, and Benning chose to retain Edler through the end of that contract. Benning re-signed Edler to a two-year, $6,000,000 AAV contract in the 2019 off-season. Between 2014 and 2021, Edler played 431 games for the Canucks between, scoring 181 points during that span. He left the team as a free agent this offseason, signing a one-year, $3,500,000 contract with the LA Kings.
Jason Garrison – Garrison led the Canucks defence in games played and in scoring in 13/14, and posted strong underlying numbers playing both the left and right side on the 2nd pairing and top powerplay unit. Garrison had been signed as a UFA from the Florida Panthers in 2012, and agreed to waive his NTC to be sent back to a Florida team. Garrison was traded in the 2014 off-season to the Tampa Bay Lightning, where he appeared in 70 regular season and 23 playoff games, scoring 37 points and helping the Lightning to an appearance in the Stanley Cup Finals. He played two further seasons with the Lightning before being selected by the Vegas Golden Knights in the expansion draft.
The Canucks traded the 2nd -round pick they received from the Lightning to the Los Angeles Kings for forward Linden Vey. Vey played parts of two seasons with the Canucks, appearing in 116 games and scoring 39 points before departing as a free agent. Vey has not played in the NHL since 2017.
Dan Hamhuis – Hamhuis played two seasons and 117 games for the Canucks before leaving as a UFA in the 2016 off-season. Hamhuis had been widely speculated to be traded at the 2016 trade deadline, but a deal with the Dallas Stars reportedly fell apart at the last moment and Hamhuis remained with the team through the end of the season. He signed with the Dallas Stars as a free agent in the 2016 off-season.
Ryan Stanton – Stanton was found money for the Canucks – he was claimed off waivers from the Blackhawks at the start of the 13/14 season and formed a highly effective third pairing with Kevin Bieksa. Stanton played 64 games and scored 16 points in his rookie season, and followed that up with 54 games and 11 points in 14/15. Stanton signed with the Washington Capitals in the 2015 offseason, appearing in one game for them in 15/16.
Chris Tanev – Tanev arguably had his breakout season in 13/14, forming one of the most effective shutdown pairings in the NHL with Dan Hamhuis, appearing in 64 games, and scoring 17 points. He was an RFA to end the season, and was re-signed by Benning to a one-year, $2,000,000 AAV contract in the off season. He was re-signed again the following off-season to a five-year, $4,450,000 AAV contract. Over his tenure with the Canucks under Benning, Tanev played 358 games and scored 91 points. He departed the Canucks in free agency in the 2020 off-season, signing a four-year, $4,500,000 AAV contract with the Calgary Flames.

Where Are We Now?

To recap, the Canucks traded Jason Garrison for a 2nd-round pick that was then flipped to the LA Kings for Linden Vey, who walked in free agency two seasons later. Likewise, Edler, Tanev, Hamhuis, and Stanton all walked in free agency as well, while Corrado was claimed off of waivers by the Leafs. The Canucks have one player on the team or in the system who can be connected to the group of eight defensemen Benning inherited when he took over the team – Will Lockwood, who the Canucks selected with the 3rd-round pick they received in the Sutter/Bonino trade that included the 2nd-round pick received from Anaheim in exchange for Kevin Bieksa.
There are two perspectives one can take on this outcome. One could argue that the Canucks received fair value for Garrison and Bieksa, and subsequent trades of those 2nd-round picks in exchange for Vey and as part of the Sutter trade were reasonable bets at the time. The Canucks also retained Chris Tanev and Alex Edler through the end of 2020 and 2021 respectively. Those players played almost 800 games for the Canucks under Benning’s tenure, and were without question the two best defensemen on the team prior to the arrival of Quinn Hughes in 2019.
Tanev and Edler provided veteran leadership in their time with the Canucks and ate up hard minutes, providing a stable backbone that other rebuilding teams often lack. No, Benning wasn’t able to trade Dan Hamhuis, and yes, he lost Frank Corrado on waivers and allowed Stanton to walk in free agency, but Benning’s hands were tied by Hamhuis’s no-trade clause, and neither Corrado nor Stanton were able to stick in the NHL after their time in Vancouver, which suggests they had limited value.
A more pessimistic view is that this look back reveals a shocking level of disregard for asset management and a waste of the valuable players and resources that Benning inherited. Benning squandered the 2nd-round picks he received for Garrison and Bieksa on an AHL tweener and an unnecessary sweetener in the Bonino/Sutter trade with Pittsburgh, a swap in which the Canucks received the weaker player by every relevant metric. Given that Benning has done some of his best drafting in the 2nd round, the loss of these picks for so little in return stings.
Benning refused or was unable to trade Alex Edler, Chris Tanev, and Dan Hamhuis at the trade deadline or at an earlier point when each player’s value might have been higher. Frank Corrado, regardless of his fate as an NHL player, clearly had value — a year after he was claimed by Toronto, the Leafs traded him to Pittsburgh for a 4th-round pick, Eric Fehr, and Steven Oleksy, then flipped Fehr to the Sharks for a 7th-round pick. If the Leafs could effectively get a 4th and a 7th for Corrado, one imagines a similar package (at least) was available to the Canucks in 2015.
While the Canucks did receive real value from Edler and Tanev — 789 games played — one ought to ask “to what end?” There are two reasons to retain these players: to win games, and to mentor young defensemen.  The Canucks had one of the worst records in the NHL over Edler and Tanev’s span, won only a single playoff series, and Quinn Hughes is the only young defenseman on the team now who had the benefit of playing with and being mentored by Edler and Tanev for a full season.  Even if you believe retaining both Edler and Tanev through the end of their contracts was the right move, it is reasonable to think that Tanev could have fetched at least a 2nd-round pick at the 2020 trade deadline, and Edler, a 3rd in 2021.
When fans and analysts complain about asset management under Jim Benning, this is what they are referring to. No one can be expected to make the winning move every time. Sometimes a deal collapses at the last minute. Sometimes a player refuses to waive his no-trade clause. None of Benning’s errors of action or omission discussed here are major, team-disrupting failures. Each is arguably a little mistake.  But each little mistake adds up, and over seven years, a series of little mistakes, minor oversights, and lack of attention to detail can turn one of the best defensive groups in the NHL into Will Lockwood.
Uncategorized
Recent articles from HockeyNorm