Juho Lammikko debuted as a solid, if streaky, fourth line centre for the Canucks: 2021/22 Year in Review 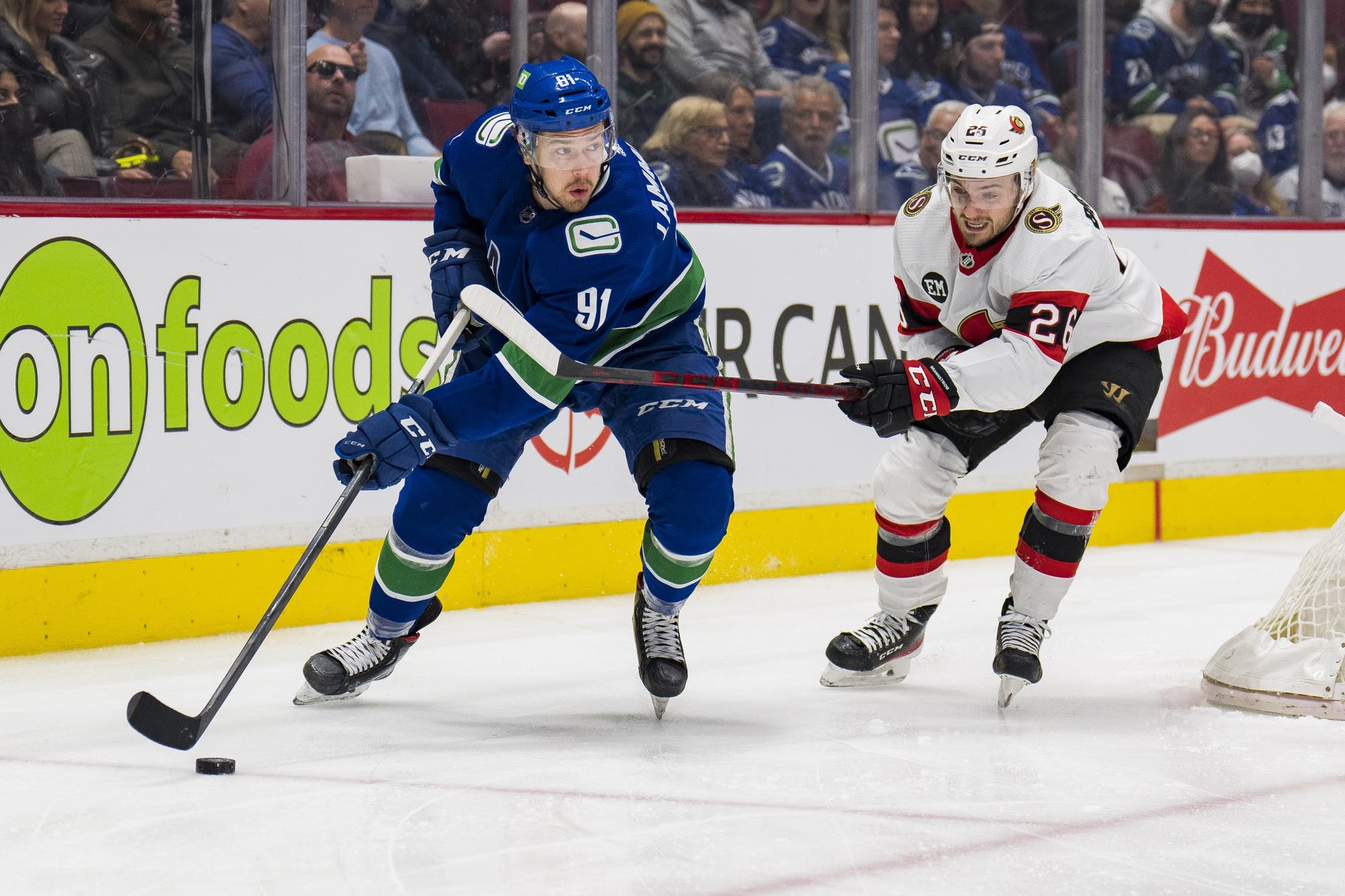 By Stephan Roget
6 months ago
With the fifth overall selection in the 2016 NHL Entry Draft, the Vancouver Canucks were (eventually) proud to select… Juho Lammikko!
Well, not really, but it does kind of feel that way. Lammikko was the centrepiece of the October trade that saw the player actually selected with that pick, Olli Juolevi, sent to the Florida Panthers.
Taken under that context alone, Lammikko might seem like a bit of a letdown, but as an individual player, he was anything but. After a period of adjustment post-trade, Lammikko also became the centrepiece of one of the best fourth lines that the Canucks have had this decade — for a little while, anyway — and he might be the only member of that trio to stick around beyond this season.
At the very least, Lammikko was able to define himself beyond the trade that brought him to Vancouver.
While the Canucks also picked up Noah Juulsen in that transaction, it was Lammikko who earned a spot on the Canucks roster right away and held it for the entirety of the 2021/22 season. The centre spot on the fourth line had opened up with Brandon Sutter still suffering the effects of Long COVID, and Lammikko was the man for the job.
Under coach Travis Green, Lammikko looked like a fine placeholder, and nothing more. As soon as Bruce Boudreau took over, however, Lammikko really came into his own.
Lammikko’s overall statline might not look like anything special. He set new career highs across the board, but only because he played far more games than he ever had before. 15 points in 75 games as a fourth line centre is okay production, but nothing to write home about.
In terms of his per-game pace, Lammikko saw a slight uptick from his days in Florida, but not to any significant degree.
But the reason why the Vancouver fanbase and mediasphere became so enamoured with Lammikko has less to do with his overall performance, and more to do with that one section of the season during which Lammikko’s line was the best the Canucks had to offer.

From Dobber’s Frozen Tools
Lammikko spent about a third of his season centring Tyler Motte and Matthew Highmore, and during that time he notched two-thirds of his even-strength points. Put another way, Lammikko scored ten points while skating with Motte and Highmore, and five total the entire rest of the season.
But his time on that line wasn’t just good for Lammikko, it was good for the whole team. The Motte-Lammikko-Highmore line was the Canucks’ best on a lot of nights, and during their run together they managed to score 14 goals at even-strength and only allow four against.

From Dobber’s Frozen Tools
On top of all that scoring and defensive play, the “Motto Line” brought the kind of energy and intense forechecking that had been absent from the Canucks’ fourth line for too long. Even after the line was broken up by Motte’s trade to New York and a string of Highmore injuries, Lammikko continued to bring that energy on a regular basis, though his scoring wasn’t quite as sustainable. 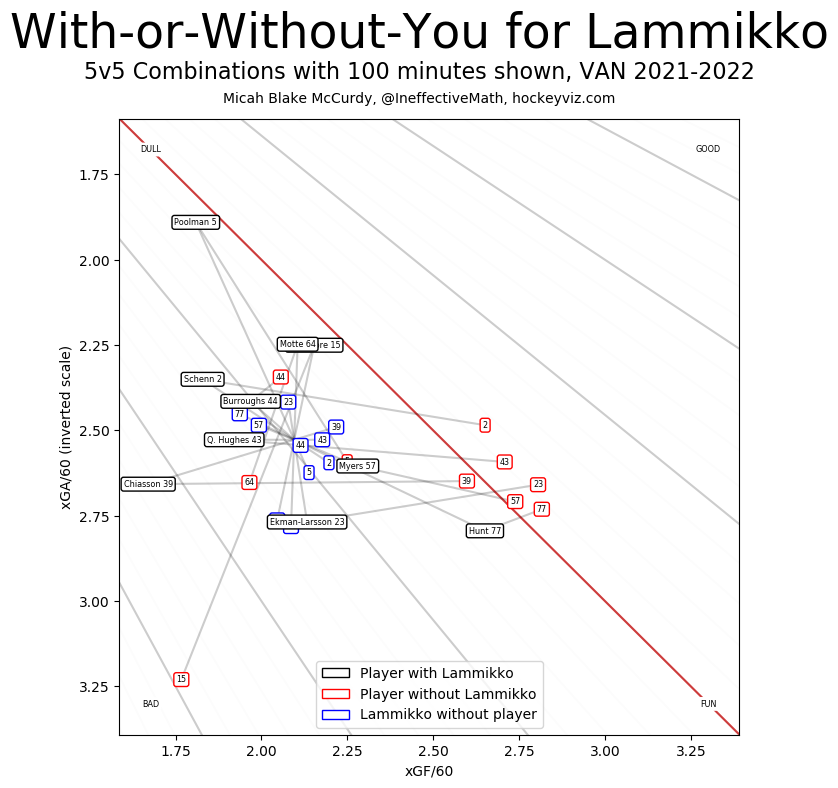 From HockeyViz.com
It should be noted, however, that this was not simply a case of Lammikko being briefly buoyed by superior linemates and then slipping back to his actual standard of play. The WOWY numbers, and other such measures, show that both Motte and Highmore also played their best hockey alongside Lammikko. If there was any buoying going on, it was mutual. Another word for that is “chemistry.”
On the defensive side of the ice, Lammikko’s story is very much the same — solid, if unspectacular.
His possession and control numbers all took a dip from where they were in Florida, but that probably has a lot more to do with the quality of the team around him than the quality of Lammikko’s play.
Even-strength stats from NaturalStatTrick.com
That advanced statline is pretty typical for a fourth line centre on a non-playoff team, and a fair bit better than what had been produced by Vancouver fourth lines over the past few seasons. Still, it’s decidedly less than impressive, especially given that Lammikko’s deployment wasn’t overly difficult. 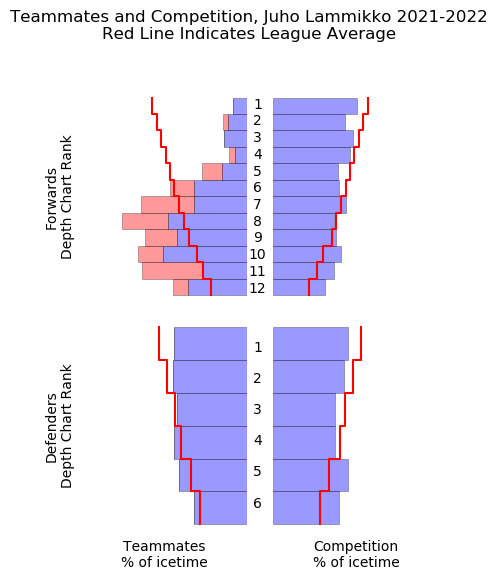 From HockeyViz.com
Lammikko’s minutes weren’t sheltered, but they did come against slightly-below-league-average competition. He did start a majority of his shifts in his own zone, which no doubt contributed to his lacklustre possession metrics. Lammikko’s main proficiency was in taking a defensive zone faceoff, winning it more often than not, and getting the puck out of the zone. That’s a style of play than can be effective, but that isn’t going to translate into a sparkling Corsi rating.
Lammikko was also a regular on the second penalty kill unit, where his performance was adequate. There again, his best work came alongside Motte and Highmore.
But the vast majority of Lammikko’s work came at even strength, and that’s where his season should truly be evaluated. His even-strength goal differential of -6 did end up being the very worst on the team, but it’s important to understand that in the proper context. Alongside Motte and Highmore, Lammikko was on the ice for 14 goals for and only four against. Away from that line, Lammikko was on the ice for 13 goals for and 29 against.
But a good chunk of that negative play came during the opening stretch of the 2021/22 season, as the entire Canucks roster was floundering under Green and as Lammikko was finding his way with a new team.
Once he figured it out, Lammikko was decidedly more effective. And once he found a couple of linemates with whom he meshed, Lammikko was more effective than any Vancouver fourth line centre has been in the past decade — if only for a little while.
Now, Lammikko is a restricted free agent, in need of a qualifying offer and then a new contract. He’ll almost certainly get both. Lammikko may not be a flawless player, but he’s one that has shown he can play a role on a contending team, so long as he’s surrounded by the right linemates.
Finding another set of such linemates is next on the Lammikko-related to-do list.
Uncategorized
Recent articles from Stephan Roget