The Jason Dickinson saga in Vancouver was peculiar and forgettable 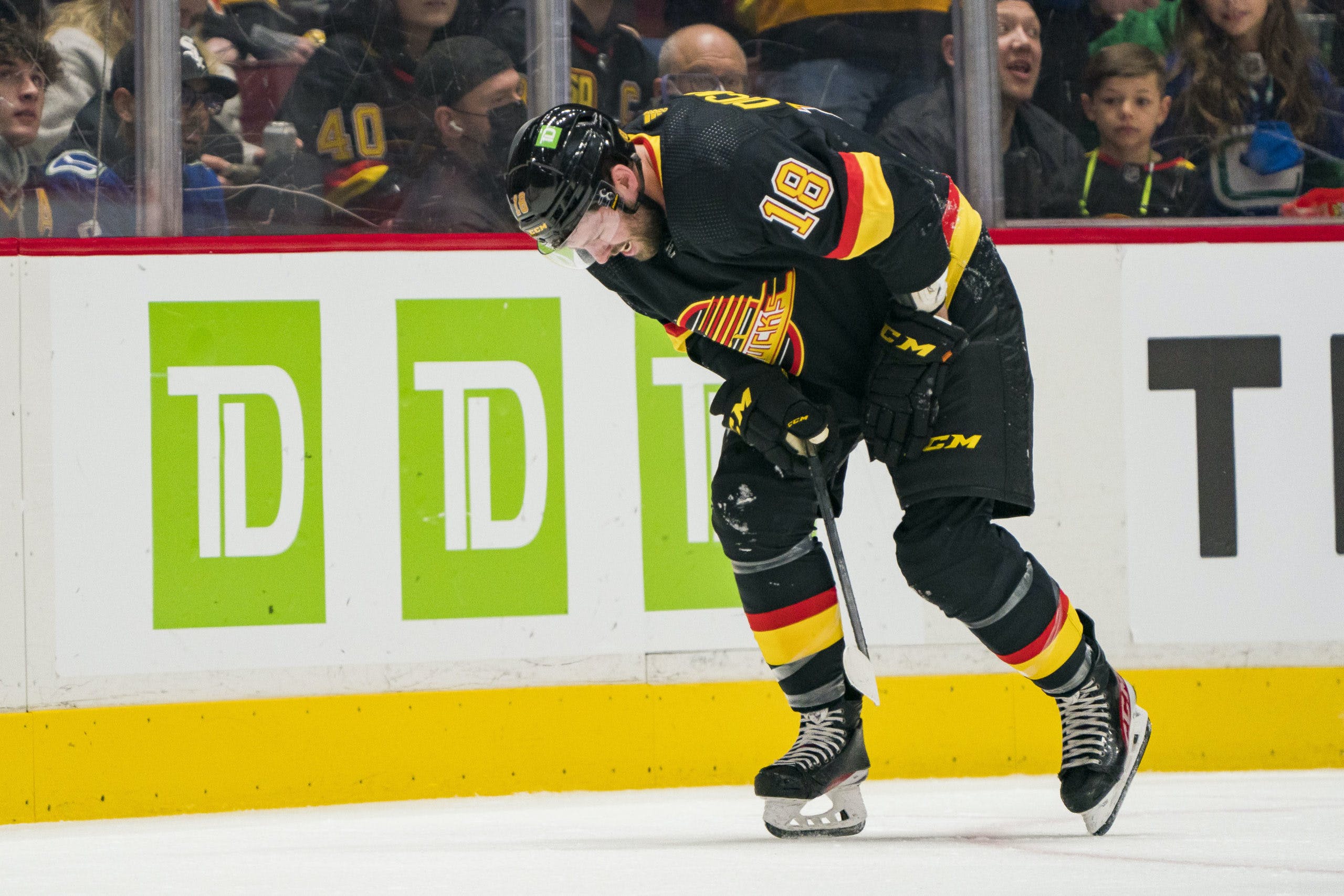 By Lachlan Irvine
1 month ago
Jason Dickinson’s time as a Vancouver Canuck ending in an unceremonious, preseason mid-game trade couldn’t have been more fitting.
The trade that sent Dickinson and a 2024 second-round pick to the Chicago Blackhawks in exchange for defenceman Riley Stillman might have been made to free up cap space and due to injuries on the blue line to Tyler Myers and Travis Dermott; but it’s a trade everyone saw coming from a mile away after the 27-year-old struggled so massively to live up to his billing in his first year with the Canucks.
Dickinson arrived in a tidy deal with Dallas as the anticipated solution to the Canucks’ bottom six centre woes. After years of paying free agent premiums to solve depth issues, then-GM Jim Benning took advantage of a buyer’s market ahead of the Seattle expansion draft and sent a third-round pick to the Stars for their shutdown centre.
Before he’d even played a single shift for the Canucks, Benning signed the newcomer to a three-year contract worth $2.65 million per year, avoiding arbitration in the process. Dickinson was supposed to be a low-risk addition down the middle that freed up Bo Horvat to focus on his offensive duties and provide head coach Travis Green with a dependable third-line anchor and special teams option.
“He’s a versatile player that can play on both the wing and at centre, and is also a strong penalty killer,” Benning said of Dickinson at the time of the contract signing.
And yet, that inoffensive deal backfired big time.
During his lone season in Vancouver, Dickinson put up some of the worst numbers of his NHL career and saw multiple stints on the IR. He struggled to find bonafide chemistry with linemates and lost his special teams role as the penalty kill sank to the worst success rate in NHL history. He was one of the only Canucks whose game didn’t see a major difference after Green was replaced by Bruce Boudreau in early December.
No matter where the Canucks put him in the lineup, nothing seemed to work. Out of the eleven points he collected in 2021-22, five of them came during the Canucks’ six-game winning streak in April. Before that, he’d registered just one point across a 19-game span, and missed all of March due to an injury sustained in a Feb. 24 tilt against Calgary.
In a March interview with Sportsnet’s Iain MacIntyre, Dickinson called 2021-22 “a garbage season that I’d love to forget.”
“I’ve dealt with a lot of injuries this year. And then the mental aspect, everything just kind of piles on and it starts to take its toll,” he said. “There’s a lot of self-doubt that happens throughout the year and a lot of questioning yourself and what you’re doing, and trying to find some sort of peace with everything and make it all work on the ice.”
Dickinson’s struggles only became more pronounced as fourth-liners like Juho Lammikko and Matthew Highmore started outperforming him on the scoresheet. It became harder for the Canucks to justify having him in the lineup as players like waiver claim Brad Richardson started scoring at a higher rate than him. And after Patrik Allvin used the offseason to sign new pieces like Curtis Lazar and Ilya Mikheyev, Dickinson quickly became the obvious odd man out.
But throughout all his struggles, the work ethic was always there. Dickinson was rarely a healthy scratch for a reason, and he had his share of scoring chances even if it didn’t translate onto the scoresheet. He just couldn’t re-find the parts of his game that made him a crucial cog in the Stars’ machine, or the linemates that fully benefited from playing alongside him.
Simply put, Dickinson and the Canucks were stuck in a marriage that clearly wasn’t working, and divorce seemed like the right course of action fairly quickly. But it’s important to remember that one team’s system won’t fit every single player to pass through it. And while the Canucks appear to find themselves in this situation more often than other clubs, it doesn’t mean it wasn’t worth the try.
The Georgetown, Ontario native had plenty of success as a shutdown centre in Dallas, and it wouldn’t be all that surprising for him to find some sort of resurgence in Chicago. But the new front office knew they had to correct the previous regime’s error sooner than later, and ended up paying more than the Canucks got Dickinson for to fix it.
Dickinson’s time on the Canucks was supposed to be a building block to playoff aspirations. Instead, he’ll end up as a strange, small footnote in the team’s history, on the same page as other one-year wonders like Nate Schmidt and Braden Holtby.
Farewell Jason Dickinson, we hardly knew you.
Editorials
Recent articles from Lachlan Irvine