Jack Rathbone on the Canucks’ offseason acquisitions, his confidence, motivation, and “that” 2-on-1 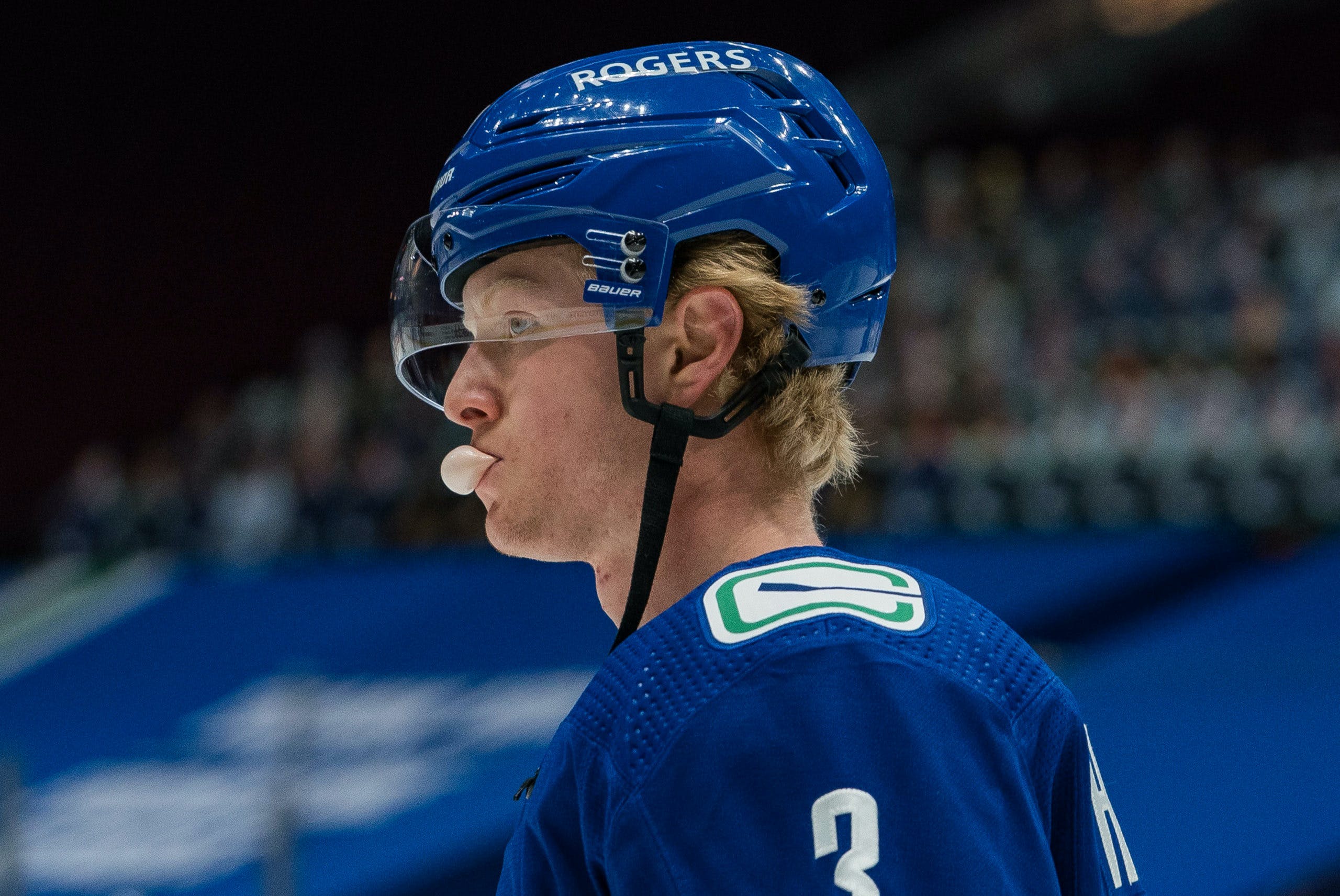 By David Quadrelli
1 year ago
Jack Rathbone is a calm and well-spoken individual who rarely seems phased by any question, no matter how difficult or poorly worded it may be.
When you listen to how he conducts himself in interviews, this is apparent right away.
That calm demeanour that gives off the impression that he’s tough to phase is also true of the way he plays on the ice.
At every level, Rathbone has been praised for his ultra-smooth skating ability. Vancouver Canucks fans got to see this firsthand during Rathbone’s eight-game stint with the club to close out what was a dreadful 2021 season in just about every way imaginable.
Those eight games have left Rathbone feeling motivated and confident as ever as he prepares for the 2021-22 season.
“Getting a taste of it near the end was great. I learned a ton,” Rathbone told CanucksArmy. “Obviously, you’re pretty motivated going into every offseason but it definitely adds a little bit more fuel to the fire knowing that I can do it. I’m just excited to go into the offseason with that goal in mind to be up there for the full year.”
Much like Quinn Hughes — who was his roommate during his late-season NHL stint — Rathbone walks the line with poise and plays an exciting brand of hockey.
There are those who will question his defensive game, but at the end of the day, Rathbone was trusted with a bigger role than most young defencemen who’ve gotten looks from the Canucks — Travis Green described it as throwing him into the deep end and seeing if he can swim — which should bode well for his chances to win a spot on Vancouver’s bottom pairing out of training camp.
Green’s deep end analogy couldn’t have been more accurate, as nobody, including Rathbone himself, will ever forget the time he got stuck on a 2-on-1 against Connor McDavid and Leon Draisatl in his NHL debut.
“That was a moment when you look back on the season and look at key moments, I’d say that was as close to a welcome to the NHL moment as I’ll get,” said Rathbone. “I kind of wish it was maybe a little bit of a different moment. With those two guys being the players they are, I don’t think anybody’s hoping to see them on a 2-on-1. I’m just happy they didn’t score. It’s one of those moments you look back on and say ‘wow I can’t believe that actually happened.”
“I’m just more excited that I came out of it unscathed.”
Things out of Rathbone’s control — such as not requiring to pass through waivers if the Canucks send him down to the AHL — may keep him out of the NHL to begin the year, but if he’s able to go down highway one and produce as well as he did in Utica last year, he’ll be back with the big club in no time.
“I think it’s awesome, I think it’s awesome for hockey not only in Vancouver, but for British Columbia,” Rathbone said of the Canucks’ decision to relocate the AHL team to Abbotsford. “Moving it so that management, coaches, or whoever can come watch… for the team to be that close, honestly, I think it gives guys a little bit more confidence in terms of knowing that it’s a quick phone call and a quick drive to go up to the NHL.”
That NHL team is going to be a lot better this season, too, and expectations will be much higher for any player called up than they were last year.
Although fans and media alike will spend years debating the long-term implications of some of the moves the Canucks made this offseason, the simple fact of the matter is that the players want a shot at winning, and there’s no debate that the lineup the club will ice this upcoming season is stronger than the 2021 product.
“To see management go out and do that, I think it just gives everyone a little bit more confidence, a little bit more excitement going into camp,” said Rathbone. “Knowing that, just without playing a game yet, that we’re definitely, a little bit of a better team. Adding guys like that, a top four dman and a top six forward, not a lot of teams make those kinds of acquisitions often. It’s exciting to see management go out and do that. The guys I know are definitely excited to start camp and get the season going.”
Rathbone and newly acquired forward Conor Garland skate and golf together in the offseason, and much like every chart and graph you’ve seen over the past two months have suggested, Rathbone thinks Canucks fans are in for a treat.
“He’s a pretty dynamic forward. Really fun guy to play with, loves to make plays. Real exciting player, creative, and a guy that I think Canucks fans should be really excited about.”
It’s no secret that the Canucks’ improved their blueline depth this offseason, but there’s still a serious case to be made for Rathbone in that third LD spot.
He’s got eight games under his belt and feels confident and motivated heading into the new season.
“That contributes to the motivation going forward,” said Rathbone of getting his eight games in. “You want to start from the outset at training camp and hopefully make it a hard decision on the coaching staff and management and just try and stay up for the whole year and try and contribute to what is hopefully an exciting team here for Vancouver going forward.”
You can listen to our full interview with Jack Rathbone on episode 187 of the Canucks Conversation Podcast by clicking here.
Uncategorized
Recent articles from David Quadrelli