J.T. Miller moves from centre to the wing as Bruce Boudreau shakes up his lines at Canucks practice 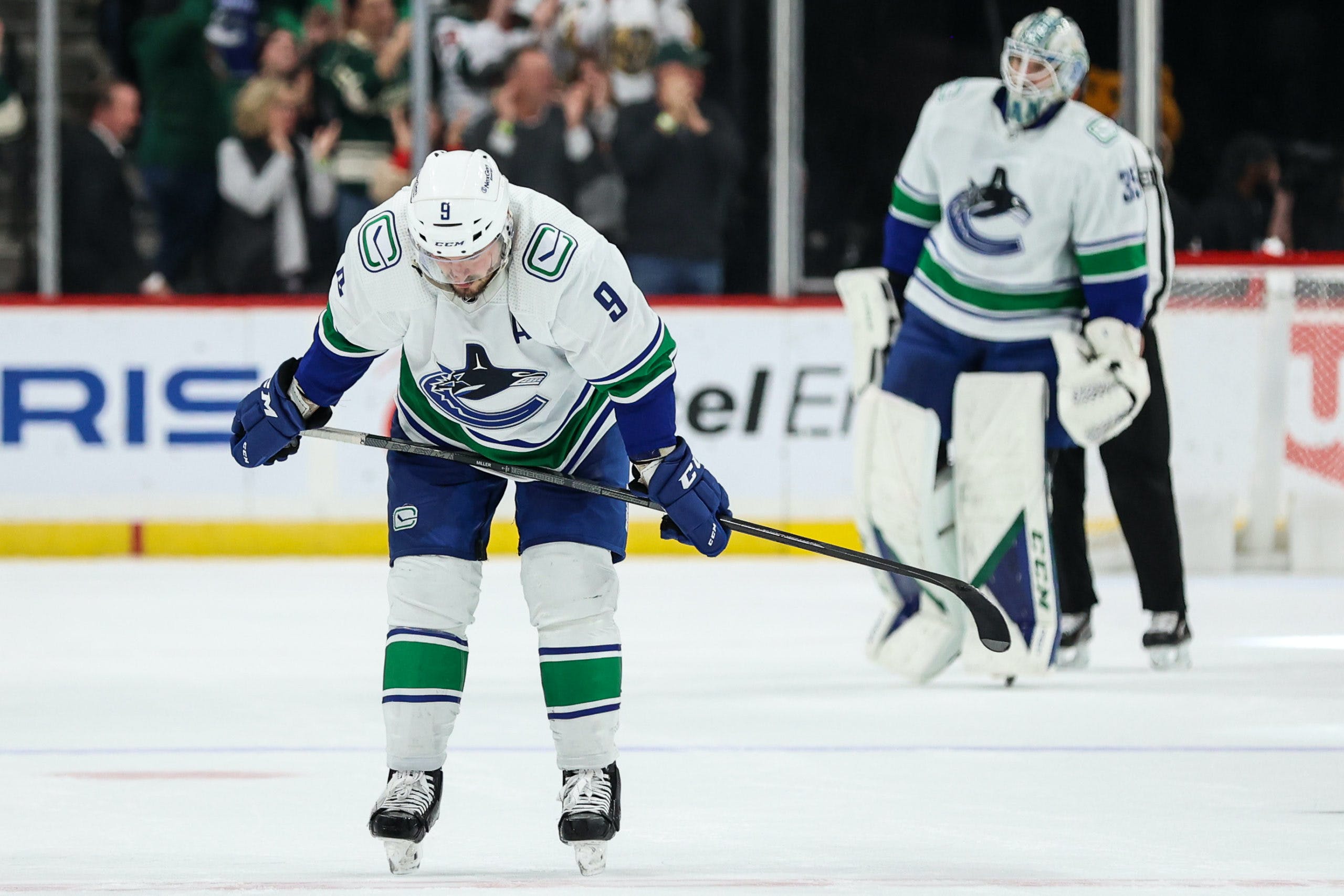 By Faber
3 months ago
Sunday morning’s practice was much-needed for the Canucks after an embarrassing showing in their home opener on Saturday night.
Not only was a practice needed but it felt like a shake-up was required after the 5-1 shellacking at the hands of the Buffalo Sabres, who are actually pretty good now.
Head Coach Bruce Boudreau moved around all of his lines and we saw the organization call up Nils Höglander and reassign Noah Juulsen back to the AHL.
Here’s how the new lines looked for the Canucks at their practice on Sunday.
The biggest change we see in this lineup is that J.T. Miller has moved from centre to wing. After posting horrific defensive metrics through the first six games of the season, the soon-to-be eight-million-dollar man is now skating on Bo Horvat’s wing with Ilya Mikheyev skating on the opposite side to round out the trio.
“We did that last year,” said Boudreau when asked about loading up Miller with Horvat. “We looked at what we had and then we just loaded up two lines and had the other lines check, check, and check — it seemed to work so we’ll see if it works again.”
Boudreau also said that it’s been a few years since he has been this disappointed with a team he has coached.
“We didn’t earn the breaks last night in the third period and that’s what bothered me,” said Boudreau.
“I just tell the truth. I tell the truth to their face.”
“When they’re good, I tell them they’re really good. When they’re bad, heck, they’re pretty smart guys too, they see it and, and I told them, I think I’m not doing my job properly right now. And that’s one of the reasons we’re losing.”
We are also looking to see the trio of Elias Pettersson, Vasily Podkolzin, and Nils Höglander reunited.
“They’re very good friends,” said Boudreau. “They like working together, and the thing with Hoggy is he’s got great speed. And Petey is a great passer. So if that combination works, then that’s great. Because we could use a little more speed sometimes.”
After Saturday’s home opener, Boudreau mentioned that he believed Nils Åman might be the Canucks’ second-best player aside from Pettersson right now. It looks like Åman is being rewarded for his strong play and will now play with some skilled linemates in Andrey Kuzmenko and Conor Garland.
Boudreau likes that Åman is always on the right side of the puck and his combination of size and speed has helped him fit in with the NHL game after playing last season in the SHL before having a nice run with Sweden at the World Championships.
As for the defencemen, we only saw five on the ice for Sunday’s practice.
Oliver Ekman-Larsson, Tyler Myers, Jack Rathbone, Luke Schenn, and Kyler Burroughs were the five healthy bodies.
“When you don’t have success, nobody’s going look good,” said Ekman-Larsson. “It’s a team sport. And that’s why we love to play this game. That’s why we show up today and try to get better. It’s tough, but it’s through the tough times that you find out who you are and who your teammates are. We just have to battle through and try to stay positive. We’re looking forward to the challenge — I think it’s a great challenge coming into tomorrow’s game.”
As for the missing bodies, Brock Boeser and Quinn Hughes are the two big names that weren’t on the ice.
Brock Boeser took a maintenance day.
And from his play so far this season, he might need a few of those.
Boeser is without a goal up to this point in the season and his effort level on the walls is clearly lacking. Looking at the new lines, it’s tough to find a spot where Boeser makes sense.
Hughes has a lower-body injury and Boudreau confirmed that he is still in the day-to-day realm. We will obviously keep an eye out for Hughes at Monday’s morning skate.
Tucker Poolman is having some good days and some bad days and Boudreau couldn’t give much of an update there.
Travis Dermott is not day-to-day but Boudreau didn’t want to say that he is multiple weeks away. He said that Dermott will not play this week.
We needed to see some changes and we got that on Sunday morning. The Canucks now prepare for what is likely their toughest matchup of the young season with the Carolina Hurricanes in town. The Canes began their season with three wins but then lost to 6-4 Edmonton on Thursday night and had a 3-2 overtime loss to the Calgary Flames on Saturday night.
This Hurricanes team is going to be hungry to get themselves back to their winning ways and are likely licking their chops knowing that they are coming into Vancouver to face off against a Canucks team that is still winless on the season.
Martin Necas has seven points in the first five games while Andrei Svechnikov has scored six goals in the handful of games.

The trio of Svechnikov, Necas, and Jesperi Kotkaniemi have a 67.54% Corsi percentage, a 69.26% control of expected goals, have created 36 scoring chances while only giving up 17, and have been on the ice for five goals scored and are yet to be on the ice for a goal against.
So, I’ll end this article by asking you, which line do you expect Boudreau to match up with against this powerhouse Hurricanes line?
Editorials
News
Recent articles from Faber