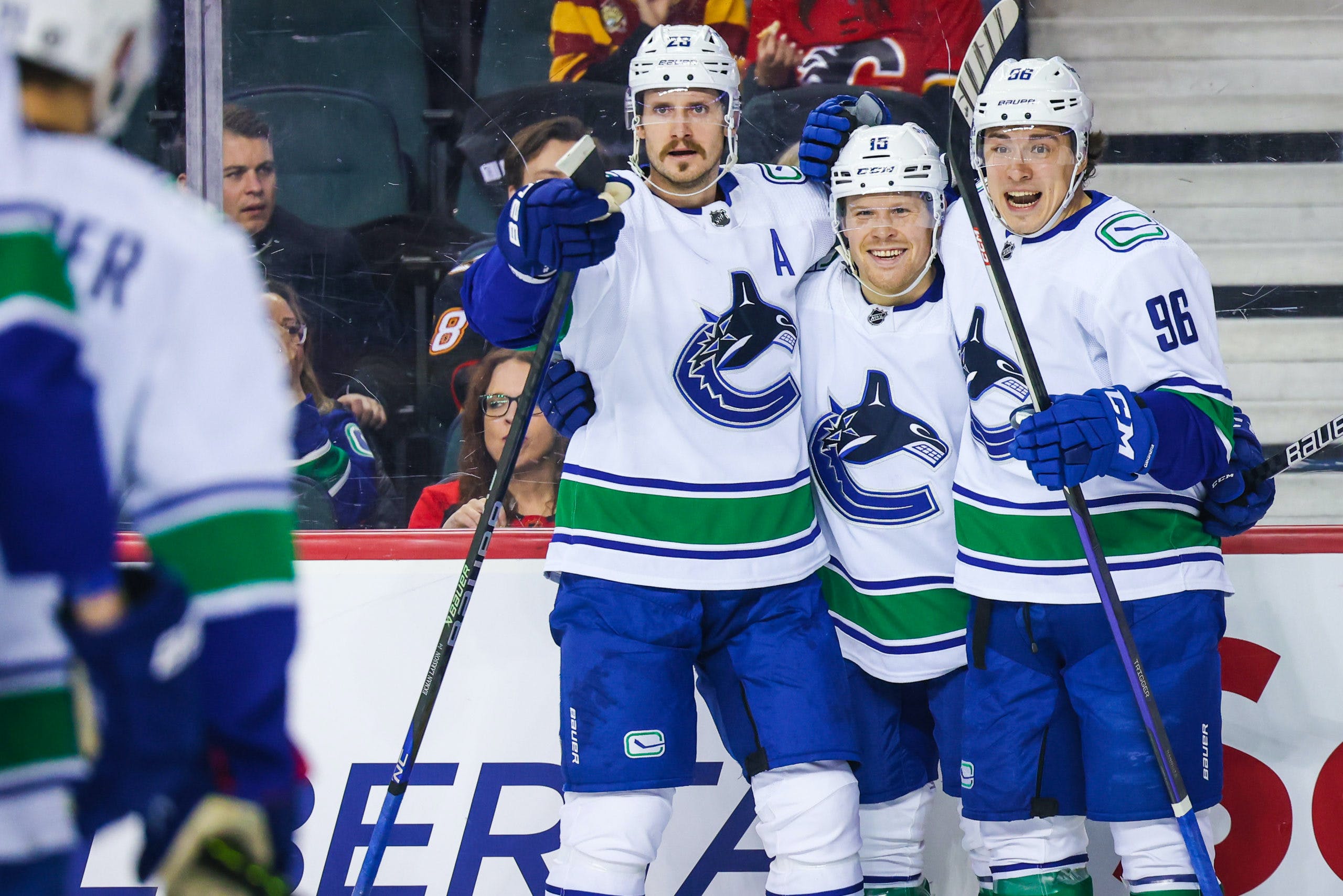 By David Quadrelli
1 month ago
Welcome back to Instant Reaction — the series at CanucksArmy where we give our instant reaction to the game and ask our readers to give theirs in the comments section below! The Stanchies by Wyatt Arndt will be posted later this evening. The Statsies — CanucksArmy’s analytics-based post game report — will be posted later tomorrow morning.
Have you ever watched an NHL broadcast and thought, “golly gee, I wonder what the backup goalie thinks about all this!”?
No? Me neither! But tonight’s broadcast tried very hard to answer that question, even if it was a complete failure in just about every way possible.
Look, I’m sure Dan Vladar is a nice guy, but who asked for a Dan Vladar iso cam and to cut to it basically anytime there was a stoppage in play? The real question is when is Collin Delia getting mic’d up?
Anyway. Let’s talk about this hockey game.
The Flames are in an interesting spot. After some roster turnover over the offseason, the Flames seem to be a team struggling to find their identity. As a result of this identity crisis, they’re also struggling to win hockey games.
Hey! The Canucks can relate to that!
The really interesting thing is the Flames and their fans are learning what the Canucks and their fans have known for some time now.
Life is tough without Chris Tanev.
Tanev suffered a scary injury after taking a slapshot to the head during Monday night’s game in Montreal. Tanev was cleared to travel, but it was still a scary incident nonetheless.
“[Tanev’s] tough, he doesn’t stay down very often,” said Jacob Markstrom after the game. “So, when he stayed down, you’re worried. I haven’t talked to him after but hopefully, he’s okay.”
Tanev won’t be back for a bit, and it’s not going to be easy for the Flames to stay afloat without him.
They haven’t been able to score a lot of goals this season, and Tanev is a key cog in their defence group. It’s not a hot take to say that losing Tanev is going to make keeping the puck out of the net a whole lot tougher on the Flames.
But let’s talk about the Canucks.
Bo Horvat wasted little time in silencing anyone who thought the off-ice drama with his contract negotiations was going to affect his ways. Bogilny got to work quickly and deflected the Canucks’ second shot of the game past Jacob Markstrom. You’ll see about six angles of this in The Stanchies, I’m sure.
After he was slated to be a healthy scratch right up until Brock Boeser was forced to sit out due to a non-COVID related illness, Nils Höglander was engaged in this one. Höglander went out of his way to finish checks, and was rewarded for his efforts as he picked up two assists and was a couple inches of iron away from adding a goal to his scoreline tonight. It was a solid game for the almost healthy scratch.
Andrei Kuzmenko’s stickhandling ability is a sight to behold, and were on full display throughout this one, especially in the shootout, when Kuzmenko scored the Canucks’ only goal.
One goal was all it took, as Spencer Martin stood tall throughout the game and during extra time.
Spencer Martin said post game that he didn’t like the second and third goals, and gave his team credit for sticking it out and providing him with goal support.
Overall, Martin was good in this one, and made some timely saves to keep the game neck and neck. Martin stopped 35 of the 38 shots he faced this evening en route to a 4-3 Canucks win. The Flames have now lost four straight games but should benefit from playing the Sharks twice and the Ducks once in their next five games.
The Canucks, on the other hand, will fly home and get some more practice time before welcoming the Winnipeg Jets to Rogers Arena on Saturday night.
What did you think of this game? Let us know in the comments section below!
Editorials
Recent articles from David Quadrelli