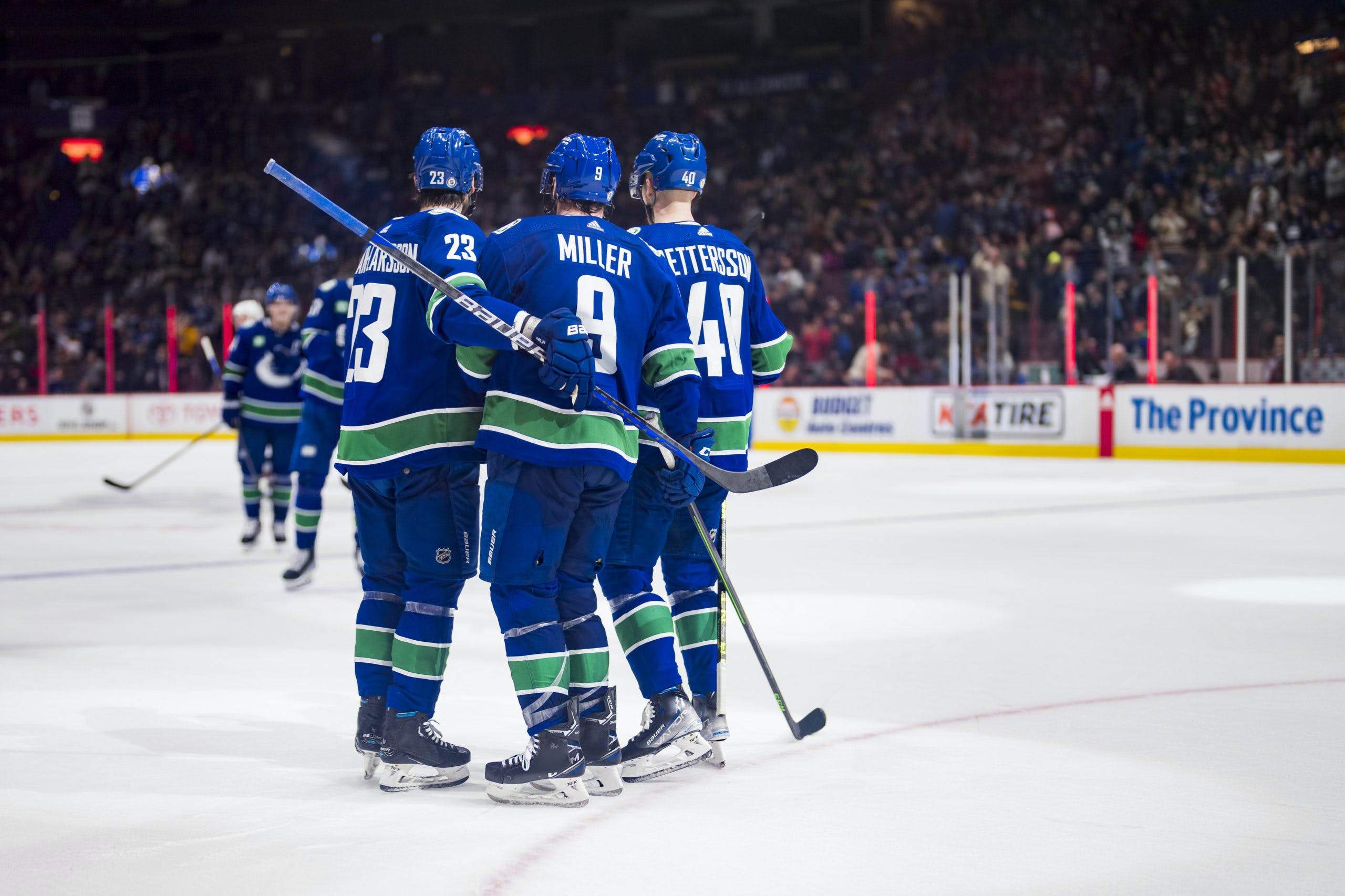 By David Quadrelli
25 days ago
Welcome back to Instant Reaction — the series at CanucksArmy where we give our instant reaction to the game and ask our readers to give theirs in the comments section below! The Stanchies by Wyatt Arndt will be posted later tonight. The Statsies — CanucksArmy’s analytics-based post game report — will be posted later tomorrow.
Tonight was a reminder of how fun the Canucks can be.
That’s the simplest way to put it. And soon, we’ll get reminded in painful fashion about all the flaws this team has.
But tonight, with the pair of goals in the second period from Andrei Kuzmenko serving as the exclamation point, we got to see how fun the Canucks can be to watch.
And that’s really the story of this game. The Canucks were fun and fine all night long. This game — dare I say it — can be filed under the “complete efforts” category.
This team got embarrassed on Tuesday night by the New York Islanders. Bruce Boudreau ripped his team after the fact, and then tried to take more of the blame off of them and onto himself when he showed up to the rink.
The players talked about the need for a complete 60 minute effort, but they do that a lot, and often don’t keep their word.
But tonight, it wasn’t just words. The Canucks went out and did it. With the defending Stanley Cup champions in town, the Canucks came out and defended their home ice.
Unlike the Canucks’ recent string of performances, and so many other games this season, it never really felt like Vancouver was going to lose this game after they came back.
Even when they were down, they looked like a group poised to handle the adversity of being down on the scoreboard, which is something they were criticized by Boudreau for being unable to do earlier this week.
Basically, the Canucks managed to tread water all game long, but really slammed their foot on the gas in the second period and didn’t look back.
They took the lead, and did everything right to hold that lead all the way until the final horn. The intensity and engagement from everyone in the lineup was there tonight, and they legitimately looked like a different team than the one we’ve seen this year.
Ultimately, the Canucks turned in a complete effort and were rewarded for it accordingly. And straight up, it was a good win all around. The problem now is that this team is beyond inconsistent, and thus fans won’t get too excited about this win, and rightfully so.
Fool me once, shame on you. Fool me twice, strike three.
As for individual performances, JT Miller looked like a solid addition to the Pettersson and Kuzmenko line, which is sure to look good in the Statsies tomorrow, I’m sure. Miller was a +2 on the night and added the empty net goal to seal this one for the Canucks, while Pettersson picked up two assists and dominated at 5 on 5.
It was a fun game to watch for the Canucks, and this team just hasn’t had enough of those this season.
43 shots on the night and 32 against? That’s the definition of fun. Right next to Andrei Kuzmenko celebrating goals, of course.
What’s your instant reaction to tonight’s game? Let us know in the comments section below!
Editorials
Recent articles from David Quadrelli