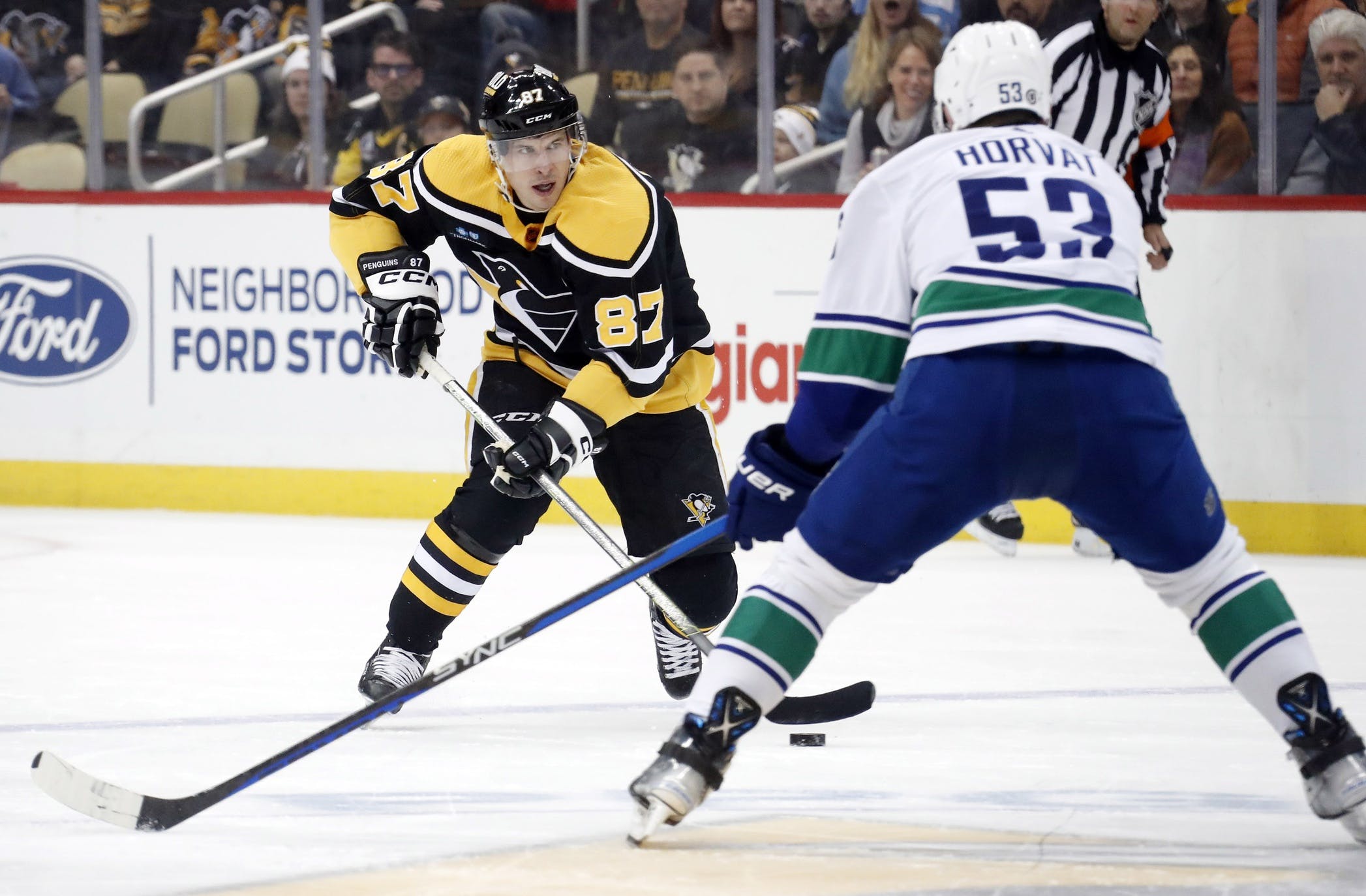 By Cody Severtson
24 days ago
Welcome back to Instant Reaction — the series at CanucksArmy where we give our instant reaction to the game and ask our readers to give theirs in the comments section below! The Stanchies by Wyatt Arndt will be posted later tonight. The Statsies — CanucksArmy’s analytics-based post game report — will be posted later tomorrow.
Now that game was what the kids call a “banger.”
Despite being soundly outshot for eight whole minutes, the Vancouver Canucks leaned on their elite finishing talent to chase Casey DeSmith from the Penguins’ net. The Canucks, confidence at an all-time high, go on to win the game and their next 30-straight. A playoff birth and two hometown discounts to Bo Horvat and Andrey Kuzmenko later, culminating in a 16-0 run for their first Stanley Cup in franchise history. Oh, and somehow they pick up the first overall pick at the trade deadline and land Connor Bedard.
Unfortunately, like the movie about John Scott at the All-Star Game, the above game (season) recap? Pure fanfiction.
No, despite controlling the scoring early with a quick 3-0 lead, two undisciplined penalties and some frantic netfront coverage later saw them give up three straight goals en route to another blown multi-goal lead.
Though the second period started okay for Vancouver. Dakota Joshua even drew a four-minute double-minor against Pierre-Olivier Joseph to give the Canucks an early opportunity to break the stalemate. Sadly, an incredibly “sus” (as the children say) hooking call against Elias Pettersson negated the four-minute power play, leading to Evgeni Malkin’s tiebreaker on the ensuing 4-on-4.
From there, the wheels fell off, as they’ve done so this season with great frequency. Elias Pettersson did his best to try and keep the Canucks in the game, but luck was not on his side in Steel City. After nearly tying the game on a shorthanded breakaway, the Penguins quickly turned the puck around to make it 5-3. In the third period, Pettersson earned himself a stand-up breakaway chance on Dustin Tokarski but was again turned aside. We’ll let the Statsies do the talking, but the eye test said Pettersson did everything in his power to give the Canucks a fighting chance after the first period. The same could not be said about the rest of the team.
Such was the ballgame. The Canucks had their chances. They put themselves within a goal late in the third. But Pittsburgh’s work rate was simply overwhelming.
My good friend always says, “Don’t only give me negatives. How about two stars and a wish, bucko?”
So who were the Canucks’ two stars tonight?
We can debate who was the Canucks second-best player. Conor Garland ate a massive hit early in the first period, shook it off, and scored his seventh of the year. Luke Schenn saw himself reunited with Quinn Hughes and picked up two assists. Brock Boeser scored his eighth of the year and made an incredible late-game sprint to deny the Penguins an empty-netter goal.
Ultimately, it doesn’t matter who was the Canucks second-best player. As a whole, they weren’t good enough. Again.
Despite scoring 8 goals to start this five-game road trip, the Canucks are 0-2 with visits to Tampa Bay, Florida, and Carolina over the next five days.
One wish? Connor Bedard scored 4 goals, and 2 assists in his WHL return this past Sunday. The Canucks could’ve used a player like that tonight. They could use a player like that every night. It’s time.
What’s your instant reaction to tonight’s game? Let us know in the comments section below!
Editorials
Recent articles from Cody Severtson