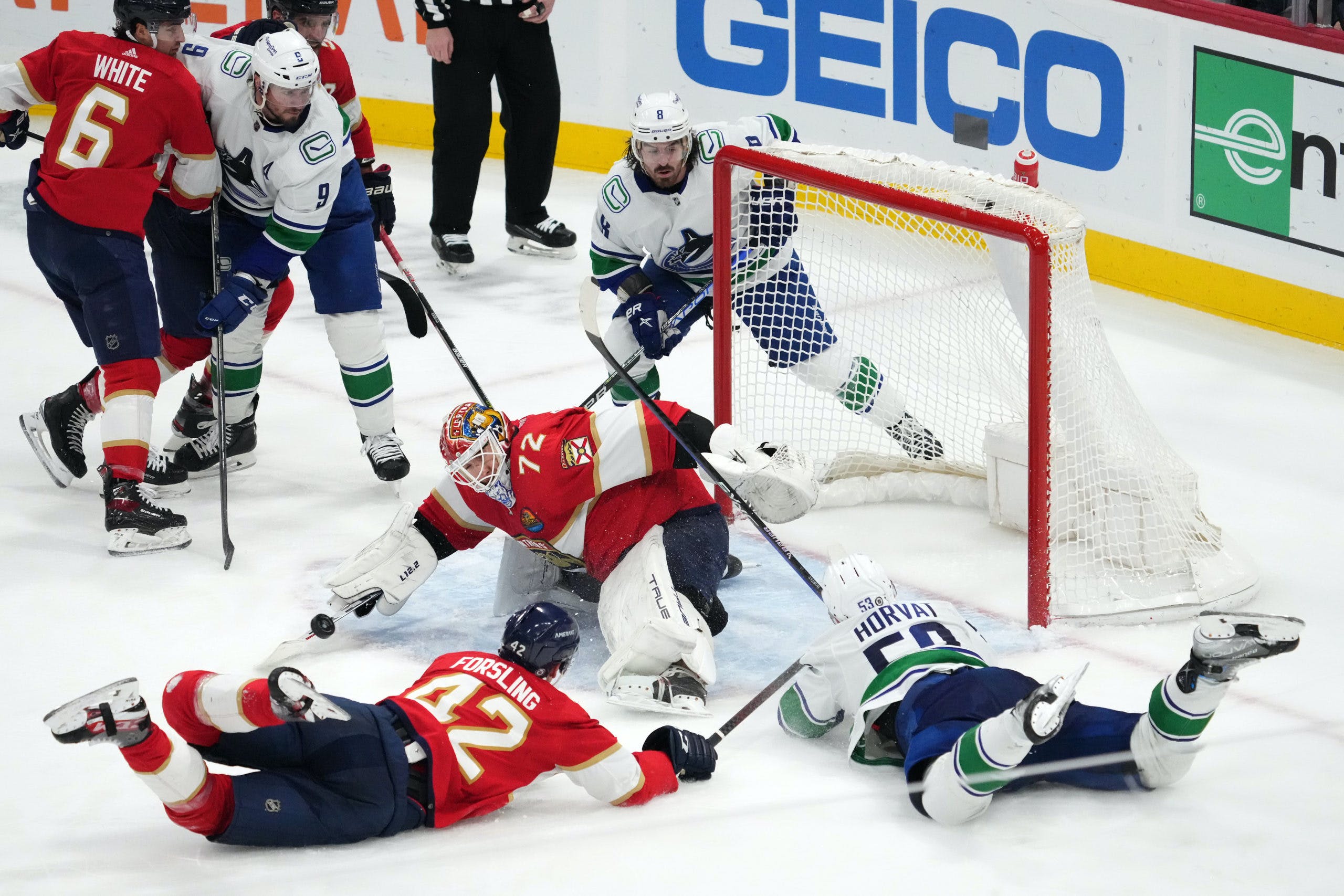 By David Quadrelli
20 days ago
Welcome back to Instant Reaction — the series here at CanucksArmy in which we give our instant reaction to the game and ask our readers to do the same! The Stanchies by Wyatt Arndt will be posted later tonight, and The Statsies — CanucksArmy’s analytics-based post game report by Mike Liu — will be up tomorrow morning.
It’s hard to give an instant reaction on nights like these.
And by nights like these, we mean incredibly predictable nights that make you think you’re experiencing déjà vu.
Anyway, let’s get into our instant reaction. The most instant reaction to this game is that even with a shaky performance from Sergei Bobrovsky in the Florida goal crease, the Canucks just couldn’t help themselves and were forced to play catchup after allowing three unanswered goals in the second period. And that’s a sign of a team that’s not very good.
But we’ve said that already this year countless times, and it’s not news to anyone that this Canucks team just isn’t very good.
Travis Dermott went down with an injury last game, meaning Oliver Ekman-Larsson was back in the lineup after serving as a healthy scratch on Thursday night. To the displeasure of many fans, OEL lined up with Tyler Myers to reform what’s been the worst shutdown pair in hockey this season.
Fresh off the heels of setting a new career-high in shots in a game with seven on Thursday night, Myers recorded a team-leading seven once again tonight.
Anyway, we’re going to keep this short and sweet.
The Canucks got burned on the power play twice tonight, and those were the difference. It seemed like the Canucks’ loss wasn’t for a lack of effort, just like Thursday night’s loss.
If the team is putting in good efforts and not finding results, could that mean that the personnel on the team perhaps needs to be changed? Tough to say! Maybe let’s get a third coach in with this group just to be sure that the roster construction isn’t the problem here.
Yes, I’m closing tonight’s instant reaction with a healthy dose of sarcasm. It’s funny what having to write about Rick Tocchet taking over as this team’s coach can do to a person. I’m sure Rick Tocchet is a nice person. He might even be a fine coach (despite his career record).
But as you may have inferred by now, I’m not of the mindset that a midseason coaching change is what this team needs right now.
One in the offseason after a careful and calculated search, and after you’ve had a chance to really diagnose what’s wrong with your team? Sure.
But to make the coaching change coming out of the All-Star break and potentially give this group its second new coach bump in as many years, ruining their draft position in the process?
Like tonight’s game, it feels like we’re headed for déjà vu all over again with this team.
Editorials
Recent articles from David Quadrelli