Further insight into each of the Vancouver Canucks’ 2022 draft picks By Faber
4 months ago
The Vancouver Canucks selected six new prospects at the 2022 NHL Entry Draft.
There were no fireworks, no big trades, no movement of picks, and aside from drafting another Elias Pettersson and being able to pick up Jonathan Lekkerimäki, it was a damn quiet two days for the Canucks.
Let’s look at each of the six prospects that the Canucks selected in the draft.

The youngest player selected in the first round of the draft was none other than the Swedish sniper Jonathan Lekkerimäki.
Scouts are high on his shooting ability, his vision on the power play, and his agility but not necessarily his pace at full speed. Lekkerimäki gets around the ice well and shows his best when he’s on the ice with the man advantage. He scored seven goals in 26 SHL games last season while also putting up nearly a goal per game in the Swedish J20 league. At some point, I’ll clip all 20 of his J20 goals, but for now, here are what his seven SHL goals looked like.
Lekkerimäki says that he wants to work on his play in front of the net next season and we expect to see him in the Allsvenskan as his team was just sent down from the SHL due to relegation. Expect to see a lot of videos and GIFs here and on my Twitter feed over the next 12 months.
The Vancouver Giants do own his rights and having him playing just a quick drive away from the organization’s offices could be something that the team talks with the player about. 21st overall pick in the 2021 draft, Fabian Lysell came over from the SHL to the WHL and showed well with the Giants. Lysell had just two goals in 26 SHL games during his draft season — he just put up 26 goals and 57 assists (83 points) in 65 games this year in the WHL.
You’d have to imagine that Lekkerimäki has the potential to be a 100-point scorer in the WHL if he does decide to come and play out at the Langley Event Centre.
Where do you think Lekkerimäki should play next season?
Let us know in the comments.

We can’t believe they actually freaking drafted Elias Pettersson. We wrote an article about the possibility and believe that he was a player who could go in the fourth round or later and thought it would be a fun swing for the Canucks. Instead, they actually liked the player enough to grab him in the third round with the 80th overall pick.
I dove back into the tape and will have an in-depth breakdown of his game after doing a quick look back in February and having him as a late-round target. The Canucks like his skating ability, willingness to do whatever it takes to win, and strong play in his own end.
Scouts are saying that he is very physical and has a fluid skating stride.
Petey 2.0, New Elias, nEwlias, or EP25/EP26/EP2 (he wore a lot of different numbers) will have a stand-alone article coming in the next couple of days. I’ll have to re-evaluate him once I get some time to dive into more tape but in my initial viewings, I didn’t see him going in the top 100. Scouting site Elite Prospects had him ranked in the 50s and they definitely put in the time to evaluate him.

The Canucks went with size in the fourth round of the draft, picking Minnesota high school player Daimon Gardner. He was a centre in USHS-MN play but I saw him on the wing during USHL play.
He shows a willingness to go to the net hard and uses his size well. He looks strong in the net-front spot and battles hard in the corners. Scouts praise Gardner for his hockey sense in the defensive zone as well. He seems to be a player who is willing to work hard to get good scoring opportunities and if developed correctly, it will be nice to see what he looks like as a 21 or 22-year-old who likely will go through Abbotsford as he hopefully makes his way to the NHL one day.

“As he activates to the inside, he patterns into a delay game, bumping pucks to trailers,” Elite Prospects crossover scout Daniel Gee wrote in an April report. “No-looks, eye-line manipulation at use, Gardner always seems to hunt for defence-to-offence opportunities. He is frankly a monster on the walls, pinning and pressuring Lincoln defenders into scramble breakouts… Off-puck, Gardner is a constant rotator, who jumps in willingly to help win battles or bully net front defenders to create screens.”

Elite Prospects had him even higher than Elias Pettersson 2.0 as he was ranked 54th on their list. The Canucks might have found some real value here in the fourth round.
UPDATE: It’s up to development now, Gardner is set to play next season in the USHL before making the jump to the NCAA. We will see if he stays at centre because in the short amount of time we spent watching him in the USHL, he was playing left wing.

This one isn’t for me to tackle. I’ve never heard of this kid but I do trust the way that Ian Clark brings his input to the NHL draft. Quads had a few viewings on him after the selection and put together a quick thread about him.
We will have more from Quads on Sunday’s episode of the Canucks Conversation Podcast!
Expect a lot more on Young during next week’s development camp.

This one also came as a bit of a surprise to us as one of the defenceman who we really like, Elmeri Laakso was still available in the draft. Instead, the Canucks went with the USHL defenceman who will be joining fellow Canucks prospect, Aidan McDonough, at Northeastern next season. McDonough will be his captain next season and I had a quick chat with Northeastern’s captain after the pick.
“He’s an awesome kid with really high character,” said McDonough. “I’m pumped he got picked.”
The Huskies have a young defence core next season and Dorrington will be given an opportunity to jump in and play in front of the NCAA’s best goalie in Devon Levi. Northeastern has their eyes set on a national championship next season and Dorrington will be relied upon to make an immediate impact and a pure freshman this fall.
We will see how this kid plays at development camp.
We will be pleasantly surprised if he can snag a top-four role with Northeastern next season and will have lots of videos of him next season as we will already be watching the Huskies for their captain Aidan McDonough before he makes his jump to pro at the conclusion of his NCAA season.

Another player that came as a bit of surprise, the Canucks selected a Russian import to the CHL, Kirill Kudryavtsev.
From what we heard on the draft floor, there’s a lot to like about how he moves the puck up ice and is also trusted in his own zone. He scored five goals and added 34 assists last season with the Soo Greyhounds.
Along with Pettersson, we will have a stand-alone article about Kudryavtsec after putting in the work on his tape.
Elite Prospects called him, “one of the smartest activators in the draft,” and that gets me exciting to dive into the tape and see what the hype is all about. Scouts say that he needs to make decisions quicker, needs to be better on his pivots and the first few steps need work. His passing seems to be the most intriguing part of his game and we will be sure to key in on that in his report.
If there’s one thing we love here at CanucksArmy, it’s seventh-round picks. We will be sure to see what Kudryavtsev is all about and bring the report to you in the coming days.
The Canucks begin development camp on Sunday with some testing and will get on the ice Monday for their first session of the camp. We will have you covered with all updates from the camp. The Canucks have 19 forwards, 12 defencemen, and four goalies on the camp roster. 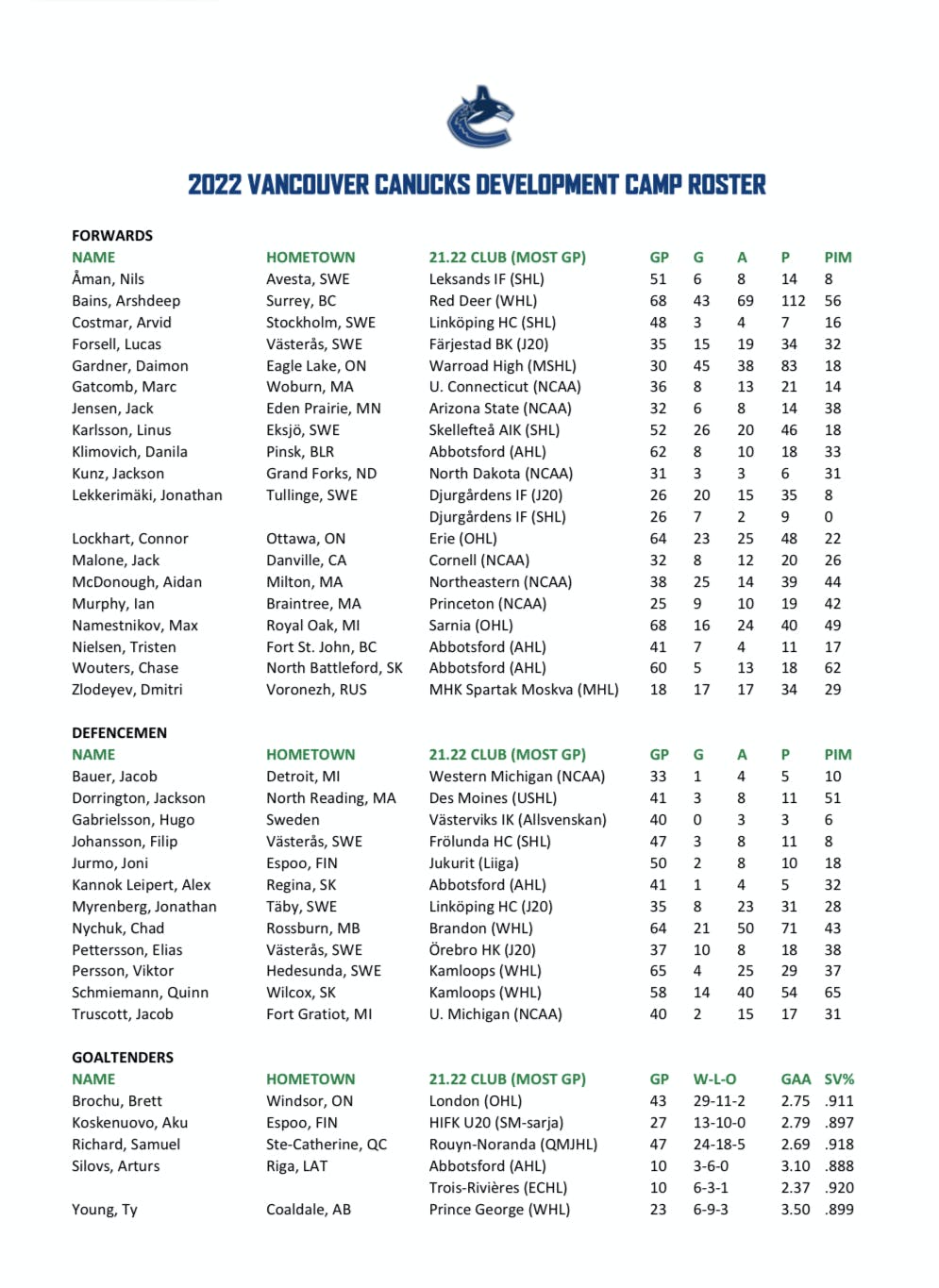 Thanks to all the readers, commenters, and people who share our articles or watch our YouTube videos. You all made it possible for me to attend my first draft as an accredited media member and our bosses were very happy with the coverage of the draft. We will hopefully be doing this for a long time here at CanucksArmy.
Again, thank you all so much!
Time for me to dive into the tape on Pettersson and Kudryavtsev, see you in the next couple of days.
Uncategorized
Recent articles from Faber