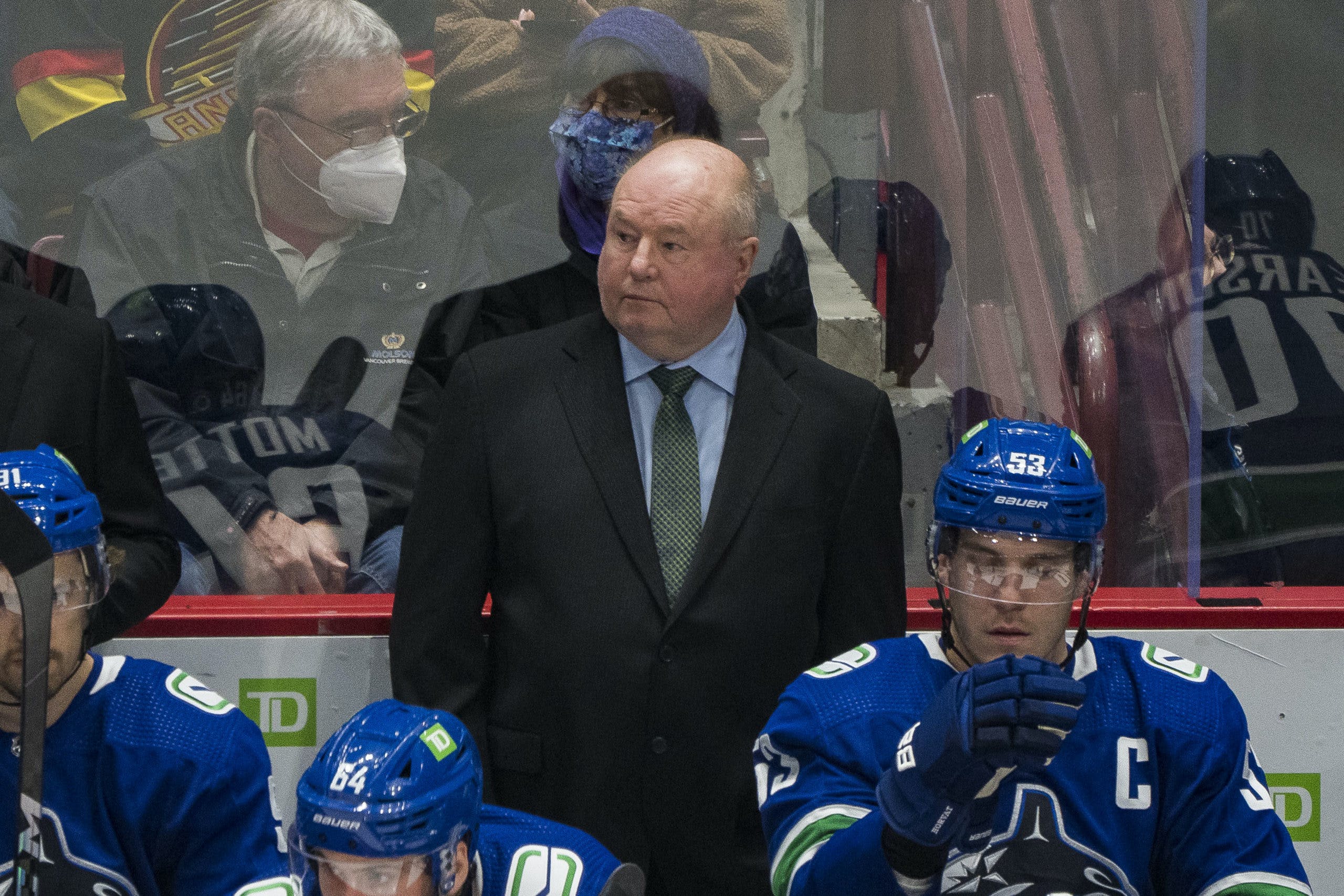 By David Quadrelli
1 year ago
You’d be hard-pressed to find a critic of the Vancouver Canucks’ new head coach, Bruce Boudreau. Since taking over behind the Canucks’ bench, the club has gone 8-1-1 and started off with a remarkable seven-game win streak.
Boudreau’s positive vibe has been felt all throughout the fanbase, as it became quickly apparent that Canucks players were happy to be at the rink once again.
But that’s not to say there haven’t been challenges for the Canucks’ bench boss, either.
This is Boudreau’s first time coaching in the NHL in the everchanging COVID-19 impacted world.
He’s had players plucked from his roster and sent into isolation, positive test results in the middle of games, and more.
Most recently, he lost Brock Boeser and Elias Pettersson — two key pieces to the Canucks’ lineup — to positive tests, meaning they couldn’t be a part of Boudreau’s “mini-camp” ahead of the club’s current southeastern road trip.
Both players returned Tuesday night in the Canucks’ 5-2 loss at the hands of the league-leading Florida Panthers, but not before they — along with Jason Dickinson, who also returned from COVID protocol — passed a conditioning test that Boudreau calls the “mountain” drill.
The drill was shared with fans in this mic’d up video of Boudreau at Monday’s practice in Florida that the Canucks shared on Twitter.
“It’s called a mountain” Boudreau says to Boeser, Pettersson, and Dickinson in the video. “It’s blue line, back, red line, back, far blue line, back, far goal line and back in 45 seconds.”
As the players complete the exhausting drill, Bodureau is offering words of encourgament and motivation the whole time.
“I do this one if you’re hurt,” Boudreau explains. “You have to be able to do it in 45 seconds — that proves you can play.”
“Every player wants to sit there and say ‘oh, I’m ready coach, put me in’, well a lot of times, they’re not really ready. They think they’re ready, but they’re not really ready.”
It’s an interesting perspective and a unique way to ensure players are actually game ready, and it’s one Boudreau has been using for quite some time now.
“I learned about the skate from Bob Woods, who was my assistant,” Boudreau told CanucksArmy. “I’m sure he got it from Bob Hartley.”
Hey, there’s a name Canucks fans know!
Boudreau and Woods have coached together almost everywhere they’ve been as coaches.
They coached togehter in the ECHL with the Missisippi Sea Wolves, in the AHL with the Hersey Bears, and at the NHL level with the Washington Capitals, Anaheim Ducks, and most recently, the Minnesota Wild.
Woods, 53, is currently an assistant coach with the Wild, as he stayed on the coaching staff after Boudreau was fired during the 2019-20 season.
The mic’d up video as a whole showcases Boudreau’s coaching style quite well, and includes him offering words of encouragement for struggling superstar Elias Pettersson, who was bent over at the hip trying to catch his breath after completing the drill.
“You’re ready to go,” Boudreau exclaimed. “Did you know, your last practice before you were sick, you were the hardest working guy on the ice? That’s really good, that’s going to get you places,” said Boudreau, before giving him a pat on the back.
Ideally the Canucks won’t have any more players land on the injured reserve or in COVID protocols for the rest of the season, but if they do, Boudreau will do all he can to make sure they’re actually ready to go before throwing them back into game action.
Uncategorized
Recent articles from David Quadrelli