If the Canucks wanted to torpedo Brock Boeser’s trade value, they nailed it 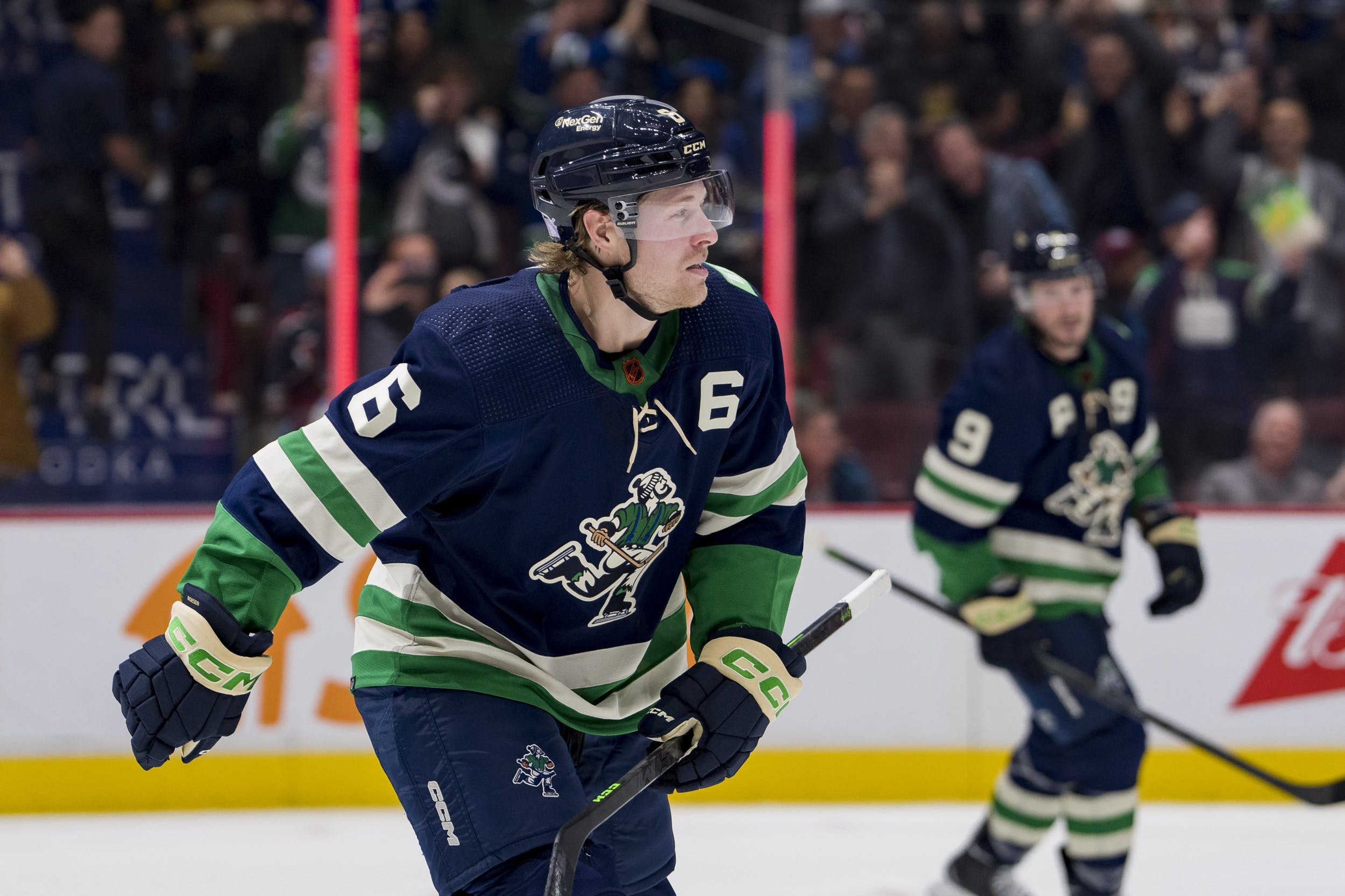 By Stephan Roget
1 month ago
Amidst a 2022/23 season that has been far more defined by mismanagement than management, the Vancouver Canucks are at it again.
It’s really no surprise that Brock Boeser finds himself on the trade market. Coming into the season, the Canucks had just extended JT Miller, were looking to extend Bo Horvat, and had brought Ilya Mikheyev and Andrei Kuzmenko into the fold. Clearly, Boeser’s spot in the top-six was being challenged, and many predicted that it would only be a matter of time before he found himself on the way out of town.
What comes as more of a surprise is the absolute fumbling of Boeser’s trade value that has occurred in the meantime.
Then again, maybe that should come as no surprise.
Let’s not forget that this season began with promises of being patient with Boeser, who had just suffered through the worst campaign of his career and then lost his father. Instead, Boeser received a hand injury in the preseason and was back in game action before the stitches had properly healed, as they would reopen later and land him back on the IR.
That set the tone for Boeser’s handling this year, and the most recent set of debacles are, in many ways, indicative of the whole of Canucks asset management of late.
It’s unclear when the Canucks decided to start shopping Boeser around, but that choice was probably made long before the decision to make him a healthy scratch against the Arizona Coyotes on Saturday evening.
Traditionally, if you’re trying to trade an offensively-inclined player, you definitely want them in the lineup against a team like the Coyotes. It’s the perfect opportunity to juice those stats a little and put a little extra shine on an asset. If management were clearly communicating their plans to the coaching staff, there’s just no way Boeser would be scheduled to sit that game.
And yet, Bruce Boudreau made the call to scratch Boeser, and no one did anything to prevent it. A lack of internal communication — another running theme in 2022/23 — seemed to be the culprit here.
If you’re looking for further proof of that shoddy internal communication, look no further than the fact that Saturday’s matchup was also Hockey Fights Cancer Night, an event of enormous significance to Boeser and his family. The custom jersey that Boeser intended to wear that night, emblazoned with the name of his recently-deceased father, had already been stitched up.
And still, if not for a late Dakota Joshua injury, Boeser was meant to spend the game in the pressbox.
Afterward, Boudreau claimed ignorance of it being Hockey Fights Cancer Night, and there’s no reason not to believe him. Nor is there much need to point any fingers in particular here. One coach making a mistake for lack of knowledge is excusable, but an entire organization failing to then notify that coach of the implications of their actions is not. Once again, it’s patently obvious that the different branches of this franchise are not talking with one another nearly as much as they should be, and the results speak for themselves.
But someone is definitely talking to someone, because the leaks keep coming.
While all this was going down, Elliotte Friedman reported that the Canucks had given Boeser’s agent Ben Hankinson permission to talk to other teams about a potential trade.
It’s a bit of news that is as confusing as it is troubling, but there’s no real way to interpret it in favour of the Canucks.
Usually, when a team gives an agent permission to seek a trade, it’s because they’re trying to do a fringe player a solid. The tactic is almost never used on those players who actually have a tangible trade value. It’s also almost never done with players who are signed for long-term, and Boeser has three more years on his contract.
Either way, we can all safely agree that having a player agent negotiate trades, as opposed to the Canucks front office, is no way to land a good offer.
The assumption was that Boeser had asked for a trade, and that management was essentially telling him to figure it out himself.
Things got even more confusing when a subsequent report clarified that Boeser had not requested a trade at all.
Why then the weirdness with the agent? It’s hard to say, and in fact it’s hard to come up with any scenario in which any of this makes sense.
But the full truth of the situation doesn’t really matter, does it? Not when other teams know what they know.
Right now, other teams know that the Canucks are in a desperate enough situation to be making some bizarre decisions.
They know that internal communication is a weakness of the organization.
They know that tension in the dressing room exists, and that there’s now specifically some tension attached to Boeser and the coaching staff after the Hockey Fights Cancer snafu.
And they know that, with Boeser’s value at an all-time low, the Canucks aren’t even going to bother to shop him around that hard themselves.
It’s a recipe for low-ball offers, and it’s a near-guaranteed way to ensure that, whenever a trade does go down, the Canucks don’t receive anything near a proper return for Boeser.
If torpedoing Boeser’s trade value was the goal for the 2022/23 season, the Canucks have achieved it in record time.
If that wasn’t the goal, well…
Editorials
Recent articles from Stephan Roget