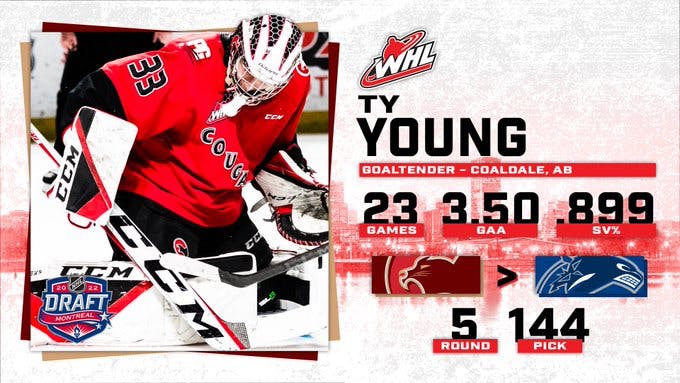 By David Quadrelli
6 months ago
Ian Clark has a bit of a reputation.
A reputation as not only one of the best goalie coaches in the world, but also one of the brightest minds in the sport of hockey when it comes to goaltending.
He’s written multiple books on the position and his work serves as a blueprint of sorts, especially overseas.
One thing Clark has become increasingly known for is his ability to identify young talent in the NHL Draft.
While he the Columbus Blue Jackets’ goaltending coach, Clark was instrumental in the club selecting Elvis Merzlikins and Daniil Tarasov, and in Vancouver, he was the mastermind behind the club’s selection of Arturs Silovs and last year, Aku Koskenvuo.
The latter two goaltenders are both late-round selections with incredible intangible assets that Clark and the Canucks are hoping can translate to on-ice success with some hard work and development.
Last year when CanucksArmy spoke with Clark, he explained what he saw in Koskenvuo and how he typically evaluates draft-eligible goaltenders.
“For me, I’m a big believer when it comes to scouting in evaluating the intangibles when it comes to goaltenders. Technique and structure and all those types of things are very tangible. Those are things we can kind of do with our eyes closed. They’re very tangible and very blueprint-y.
“I say this, and I probably shouldn’t, but I say that we can teach a goaltender technique in a weekend,” Clark said with a laugh. “So for me, those things really don’t register for me when I’m evaluating a goalie. What I’m really looking at is the intangible things that I know through my history in the game are much more difficult to teach through nurture.
“When I look at Aku, I look at a goaltender that may be a little bit raw, a little bit green with some of the structural stuff, you know, there’s some blemishes there that we can easily transform and reorganize in his game, but some of those other areas which are much harder, he has in spades.”
It was for similar reasoning that Clark was drawn to Prince George Cougars backup Ty Young in the 2022 NHL Draft.
“Again, another goaltender that has really strong underlying talent,” Clark told CanucksArmy during Canucks development camp at UBC. “And at the end of the day, from my perspective, I’d rather a less programmed goalie that we can still program and build the infrastructure around that underlying talent that they have.
“So Ty’s a goaltender who first of all is very young and already closing in on 6’3. So, a goaltender with great athleticism, a goaltender with great natural underlying talent, and a goaltender that’s obviously going to have some size because he’s still growing.”
At first, the pick gave some people pause as Young was somebody who flew under a lot of people’s radars. But the Canucks weren’t the only team interested in Young, who says he was a bit surprised to see his name next to the Canucks’ logo on draft day while he was out camping and golfing with friends and family.
“All I did was a questionnaire for them,” Young told CanucksArmy. “So when I saw my name on the TV by the Canucks, I was pretty excited because obviously my family’s from here. So it’s a dream come true, but I really wasn’t too sure it would be the Canucks who picked me, I thought it would be someone else.”
Young was open and honest when evaluating his game, and admitted that while his technique and movement may not be where he wants it to be just yet, he’s ready to let his work ethic get him there.
“That’s kind of I think one of the reasons why I was kind of getting looked at to get drafted and stuff was just because my coachability and work ethic to get better is pretty high. So my movement and technical stuff may not be the best right now, but I think my coachability is really good.”
We asked Clark specifically about that statement, and the Canucks’ goalie coach absolutely agreed.
“If you watch him play, he’s a fierce competitor,” said Clark of Young’s game. “We had an opportunity to see him play with the Calgary Canucks in the AJHL before he went on to Prince George.
“Really at the end of the day, it’s those things and again, it’s the intangibles — not that they’re intangibles necessarily, that’s probably an overused word — but it’s again, those underlying elements to what he brings to the table.
“The incredible compete, the ability to find creative solutions in difficult moments because he never quits on a puck. His work habits, the way he goes about his business off the ice are all important commodities that we look for in these players.”
Young is a project goaltender with a long road ahead of him, but is eager to continue applying the concepts he learned at development camp from Clark and try to take that next step.
“I’ve heard a lot about his past and stuff,” added Young when asked about Clark. “He’s worked with some of the best goalies of all time so he definitely knows what he’s talking about.
“It’s kind of a crazy experience working with him because he’s so knowledgeable. It’s really awesome.
“I’m really excited to start the journey.”