How the Vancouver Canucks’ defence and goalies fared this season: 2021-22 report cards 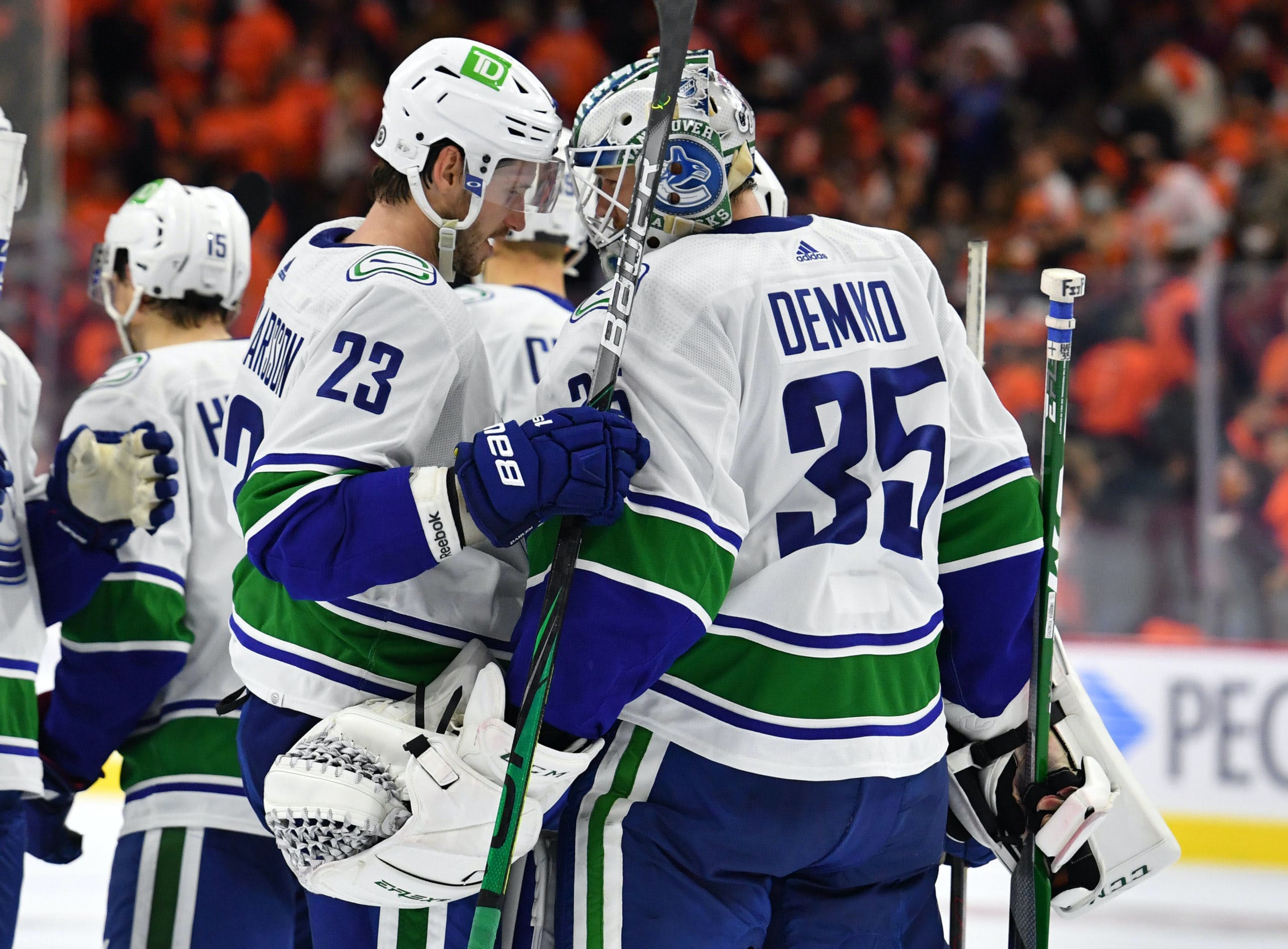 By Lachlan Irvine
6 months ago
As we continue our report cards for the 2021/22 Vancouver Canucks season, it’s now time to turn our attention to the defence and the goaltending of the club.

When it comes to impact players, Thatcher Demko easily made the largest of any Canuck.
With all due respect to J.T. Miller, the Canucks lived or died by the play of their All-Star goaltender during Demko’s first full regular season as the team’s starter. The result was an impressive 33-win campaign, ninth-most in the NHL this year, and a monstrous 64 starts that only Nashville’s Juuse Saros and Winnipeg’s Connor Hellebuyck surpassed.
Demko’s play was routinely the only thing keeping the Canucks alive in games during October and November. Far too often in the early months of the season, a great performance by the sophomore starter would end up wasted due to Vancouver’s struggles on the scoresheet and the penalty kill. Once the run support finally arrived in mid-December, Demko’s win totals rose with it.
Heading into the home stretch, there was a real case to be made that Demko’s strong year would make him a favourite to win the Vezina Trophy. But his numbers took a bit of a dip in the season’s latter stages as the results of Demko’s huge workload took its toll.
An injury sustained in the final month of the season didn’t stop Demko from playing in nine of Vancouver’s ten games from April 3 to 23 before finally deciding to shut himself down last week. Ironically, if not for more consistent help from his main backup, Demko might’ve been able to finish out the year with a clean bill of health, and some playoff starts to boot.
But don’t let the bitter end fool you; Thatcher Demko gave his heart, soul and body for a shot at the postseason, and the Canucks might’ve finished in the absolute basement if not for his efforts.

If Travis Dermott will forever represent the first acquisition by Canucks rookie general manager Patrik Allvin, so far’s he setting a good precedent.
Coming to Vancouver at the trade deadline after six seasons with the Maple Leafs, Dermott’s solid defensive responsibility has already made him a welcome addition to the Canucks’ often overmatched blue line. While his two points in 17 games are a little low, the 25-year-old still has plenty of room to grow and adjust to his new team.

This might be the most contentious of all the player grades handed out today. To properly mark Oliver Ekman-Larsson’s work, we have to separate the man from his contract as much as humanly possible.
From a defensive standpoint, Ekman-Larsson did surprisingly well when paired up with Tyler Myers. The expectations were low, but through the third-most ice time of any Canucks blue liner Ekman-Larsson was crucial to putting together the second stingiest blue line in the league at even strength, with a Goals Against per 60 of 2.13.
Offensively, OEL put together a productive 29-point season despite seeing his scoring role diminished from his time in Arizona. With Quinn Hughes ahead of him on the depth chart, it allowed Ekman-Larsson to play in lower pressure situations and get more choice matchups than he got as the Coyotes’ set first pairing guy.

It feels a little unfair to give Jaroslav Halak the lowest grade of the bunch. But for a single-year backup goalie signing, it sure backfired big time.
In the Travis Green era, Halak was a victim of circumstance as the Canucks snakebitten scorers lost him multiple low-scoring affairs and gave him a winless record through six games. As the front office changed hands, the $1.25 million performance bonus triggered by Halak’s tenth start made the team extra cautious about playing the 36-year-old veteran.
The long layoffs between games led to some lacklustre performances on key nights off for starter Demko, giving Halak a final record of 4-7-2 and a .902 save percentage. Considering Demko’s eventual injury and the Canucks missing the playoffs by just five points, it’s hard not to look at Halak’s second half where crucial points got away from Vancouver.

We already knew that Quinn Hughes is the best defenceman the Canucks have ever had. Now, he has the single-season record to match.
Hughes’ 68 points smashed Doug Lidster’s 35-year-old record for points by a defender, and it’s only a matter of time before he controls the full leaderboard. The 22-year-old also improved massively in his own end of the ice, and did all while cycling through a collection of different defensive partners in the first half of the season.
For Hughes, there’s no direction to go but up.

After struggling to earn a place in the lineup during the preseason, Brad Hunt eventually worked his way into a permanent third pairing role, notching 17 points in 50 games along the way. A regular on Vancouver’s second power play unit, the Maple Ridge native was as solid as a stopgap depth defender can be, and could potentially end up returning in a similar role next season.

He might be part of one of the NHL’s most expensive defensive pairings, but Tyler Myers did his best to make his $6 million cap hit worth its weight this season.
Myers was the only Canuck to play in all 82 games, and was unexpectedly strong in the defensive zone this year. Add his 18 points to the mix, and Myers’s arguably had the best season of any Vancouver defencemen not named Quinn Hughes.

Yes, Spencer Martin played only six NHL games in 2021-22. But those six may live on in Vancouver Canucks lore from now until the end of time.
With Demko and Jaroslav Halak each missing significant time during January and April, Martin was thrown to the wolves as the Canucks’ third-string goalie. And yet, against all odds, Martin posted an incredible 3-0-3 record and a .950 save percentage behind some injury and illness-depleted Vancouver lineups.
With Halak heading to free agency and younger netminders like Mikey DiPietro and Arturs Silovs still requiring AHL seasoning, Martin is already being pencilled in as Demko’s projected backup next season. And with a little extra time to learn under the watchful eye of Canucks’ goalie coach Ian Clark, he could become a bonafide 1B option for Vancouver.

Let’s be honest: while his four-year deal worth $10 million might say otherwise, Tucker Poolman was always the eighth defenceman on this team.
After starting the season paired with Quinn Hughes, he quickly ended up behind the likes of Luke Schenn, Kyle Burroughs and Brad Hunt on the depth chart. A head injury ended Poolman’s season prematurely in late January, but with only three points across 40 games, it’s doubtful that he was going to get many chances to boost those numbers.

Luke Schenn was the people’s champion for a variety of much-deserved reasons.
After clawing back from a poor showing in the preseason, Schenn became the perfect stay-at-home partner for the high-flying Quinn Hughes. Not only did he earn the Unsung Hero award for his thunderous hits and willingness to drop the gloves, but he also picked up 17 points for his best scoring season in ten years.
Uncategorized
Recent articles from Lachlan Irvine