How the Minnesota Wild have reversed their fortunes since the 2020 playoff bubble, and what the Canucks can learn from them 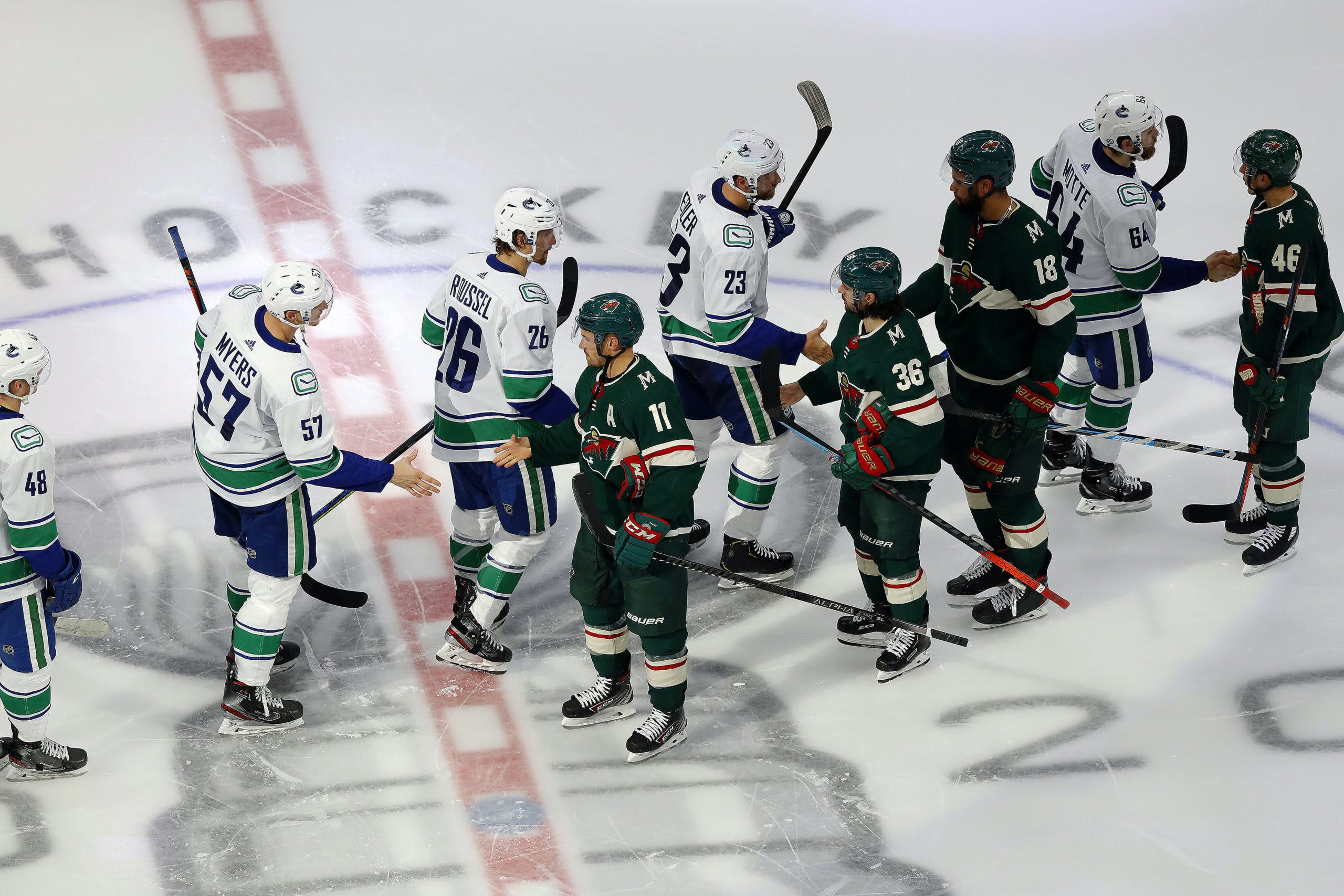 By Lachlan Irvine
1 month ago
When Chris Tanev scored the Canucks’ series winner that knocked the Minnesota Wild out of the 2020 playoff bubble, it seemed to signal the end of one era and the beginning of the other. The youthful, entertaining Canucks seemed to be just getting started while the aging, low-event Wild seemed destined for a slow and aggressive rebuild.
But as these two teams prepare for their second meeting of the season on Saturday, it’s hard not to notice the completely separate directions the franchises have gone in since.
In the last two seasons, the Wild won 88 regular season games, made the playoffs both times and even finished as high as second in the strong Central Division. Over that same span, the Canucks won just 63 games and haven’t returned to the postseason since besting Minnesota in 2020.
There are plenty of reasons why the trajectories of these two teams have gone so differently. But it all boils down to the approaches each team’s respective front office has taken in roster construction, the risks involved, and how they each interpreted their future potential. And in some crucial cases, it’s also come down to some of the choices each team didn’t make in the last two and a half years.
So why are clear skies in Minnesota compared to the stormy clouds hovering around Rogers Arena? Today we’re going to take a look at some of the biggest decisions the Wild have made since 2020, the risks that came with those calls, and what lessons the Canucks could take away from it today.

A year after the bubble, the Wild made the biggest decision in franchise history since signing Zach Parise and Ryan Suter to matching 13-year, $98 million deals in 2013. That move was buying out the remaining four years on each of those behemoth contracts, giving Wild GM Bill Guerin an extra $10.3 million in cap space to work with.
For one season.
Because of how Parise and Suter’s contracts were structured, the move triggered the NHL’s cap recapture penalty and forced Minnesota to take on a shocking $12.7 million in dead cap this offseason. That number will go up again in 2023, with the Wild expected to have an eye-watering $14.7 million in dead cap over two years.
After that, the numbers get a little more manageable. Minnesota will still be on the hook for $1.66 million in cap recapture for an additional four years past the original expiration date of Parise and Suter’s deals, but that amount is far from a team killer. For comparison, the Canucks paid nearly double that amount after Roberto Luongo retired three seasons ahead of his contract expiration in 2019.
So what was the benefit for the Wild to put themselves in such an extended amount of dead cap hell? And why should a team in a similar situation like the Canucks consider following their lead?
There’s a simple answer. The benefit of foresight. Guerin said as much in this Athletic article by Michael Russo at the time of the joint buyouts:

“I didn’t think it would do any good just to wait,” Guerin said when asked if he thought about maybe hanging on to Suter for another year or two and then trying to trade him if he’d waive his no-move then. “Look, those years will be tough, but we’re going to have to do a very good job of drafting players, and a very good job of developing players, and injecting some younger, cheaper players into our lineup.”

As Guerin puts it, there’s a lot of value in guarantees. Rather than hope that neither Parise nor Suter retire early and potentially force the team to offload a massive chunk of a Cup contender at its peak, the Wild elected to decide before it impacted their existing roster and build out from there. And while the move does limit their ability to improve through the free agent market over the next four seasons, it also encourages the front office to get more creative on filling rosters spots with younger talent before their salary cap opens back up again in 2025.
And the way things are going, Minnesota’s true Cup window is going to line up at the perfect time.

The rise of Kirill Kaprizov

Kirill Kaprizov’s breakout in 2021 was a massive reason the Wild were willing to walk away from Parise and Suter at the specific time they did, and he’s only getting better. The 25-year-old Russian signed a five-year contract worth $45 million that offseason and immediately went on to score 108 points last season along with eight more in the playoffs.
Kaprizov will be a year out from free agency when the Wild’s cap situation clears up in 2025, and the hope is by that time the Wild will have put together the nucleus of a Cup contender around him that will keep him in Minnesota for the foreseeable future.
The Canucks went in a similar direction with Elias Pettersson, signing him to a three-year bridge deal the week after Kaprizov’s extension was locked in. But the Canucks don’t have the same salary cap clarity that the Wild do, and are also likely to pay through the nose for such a short-term contract to their undeniable best player.
By the time Pettersson’s contract ends in 2024, Patrik Allvin will still be on the hook for Oliver Ekman-Larsson’s $7.26 million cap hit for another three seasons, and J.T. Miller will have six years left on an extension paying him $8 million a year.
The Canucks still have some time to address those issues before they get to a serious fork in the road. But Kaprizov’s 33 points in 25 games, along with the Wild’s current third-place spot in the Central, are providing a potential blueprint for the Canucks to consider.

Contract extensions and buyouts are one thing. Improving a middle-of-the-pack team through the trade market is another game entirely.
During the qualifying round, Minnesota fans put a lot of their eggs into one basket: a basket named Kevin Fiala. The 11th overall pick in 2014 had been limited to just 19 games in 2018-19, but in 2019-20 he added a much-needed boost of youth and speed to a Wild lineup in transition.
After notching a career-high 54 points in the COVID-shortened year, Fiala picked up where he left off against the Canucks with three goals and an assist in the qualifying round, good enough for second on the team.
But just as soon as Fiala was getting started, the Wild’s entire outlook changed.
While Fiala quickly became one of the Wild’s core forwards, Kaprizov’s breakout and Minny’s cap situation quickly made him expendable. After playing out a one-year deal worth $5.1 million in 2021-22, during which Fiala finished second in team scoring with 85 points, GM Bill Guerin saw the writing on the wall and dealt him to Los Angeles for defensive prospect Brock Faber and a 2022 first-round pick the Wild used to select winger Liam Öhgren 19th overall.
So far the trade has paid off for both parties. The Wild were able to add a pair of top prospects to their stable, while Fiala’s 30 points in 29 games currently leads all Kings skaters.
There was plenty of risk for Minnesota by trading their second-best scorer while he was still under team control. But they knew with their contention window still ahead of them, it made more sense to pull the plug while Fiala’s value was at its’ peak and add the best pieces possible that line up with their future plans.

When the Anaheim Ducks chose not to qualify young centre Sam Steel last season, the Wild picked him up on a one-year, $825,000 contract. It hasn’t been a perfect start for Steel, who has just seven points, but coach Dean Evason sees potential and currently has the 24-year-old on the first line centring Kaprizov and Mats Zuccarello. The Wild also get to retain Steel as a restricted free agent if they so choose.
But the biggest acquisition the Wild have recently made was the one in goal. After Marc-Andre Fleury struggled to help the Blackhawks win games last season, the Wild were able to pick up the defending Vezina Trophy winner at the trade deadline for little more than a second-round pick and 50% of his salary retained.
After the season, the Wild signed Fleury to a two-year deal at an AAV of $3.5 million, a steep discount from the $7 million he’d made in the previous three seasons. They simultaneously found a trade partner for former starting goalie Cam Talbot, moving him to the Senators in exchange for the much-cheaper Filip Gustavsson.
While Fleury’s stats haven’t been strong this season, the Wild took the gamble knowing that a 38-year-old goaltender might not be able to take on the same workload as in previous years. Adding the 24-year-old Gustavsson as Fleury’s backup provides them with a potential successor or a stopgap for former 2020 first-round pick Jesper Wallstedt.
The Wild have put themselves in a spot where cheap depth makes up the vast majority of their forward corps while paying a bit extra for short-term veterans on the blue line. As young talents like Matthew Boldy and Calen Addison step into more prominent roles, the Wild will have the room to offer them longer-term deals without needing to worry about the long-term cap implications.
The Canucks have seen the potential of strong contributions from value players like Dakota Joshua and Nils Åman firsthand, and hopefully, it’ll make them less gun-shy toward adding more players like them in the future.
Minnesota’s roster still has a ways to go, as they’re currently tied for 20th in the league in goals for. But the results in the standings are there, and they’re getting better as the season moves along.
The Wild aren’t necessarily the perfect blueprint for the Canucks to follow, but they are a solid example of how to build a team on hope for the future while still being competitive. It takes a little bit of luck, the willingness to take risks and the know-how to manage the salary cap as cleverly as possible.
And with the rumours of the Wild’s interest in dealing for Brock Boeser, we might see that strategy on full display again soon.
Editorials
Recent articles from Lachlan Irvine