How should the Vancouver Canucks divy up goaltending starts moving forward? 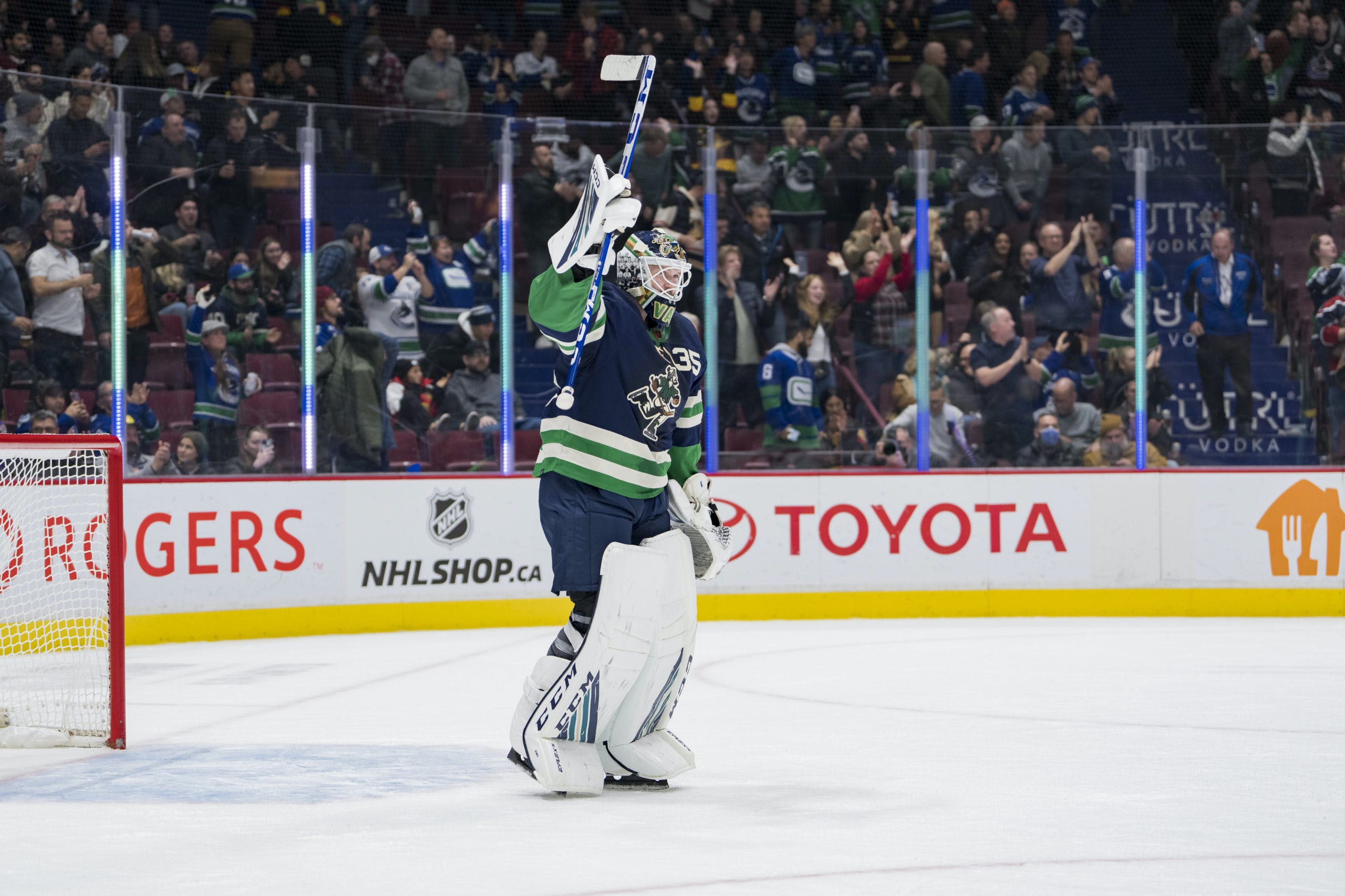 By Noah Strang
2 months ago
Over the past 15 seasons, Vancouver Canucks fans have enjoyed some great goaltending. Between recent Hockey Hall of Fame inductee Roberto Luongo, Ryan Miller, Jacob Markstrom, and Thatcher Demko, the Canucks have employed some great goaltenders.
In recent seasons, goaltending has been considered a strength for the Canucks. Demko emerged as one of the NHL’s brightest young netminders and has played a vital role in the team’s success. He’s put together many herculean efforts, including a stretch against the Vegas Golden Knights during the 2020 playoffs that will go down in history.
However, to start this season, Demko has been far from the player that fans have come to know and love. He’s posting career-low numbers across the board including a 3-9-2 record, 3.81 goals against average, and an .885 save percentage.
On the other hand, backup Spencer Martin has continued his great play from last season. While he hasn’t replicated the 1.74 goals-against average he posted in 2021-22, he has been much more consistent than Demko. He’s currently spotting a 6-1-1 record, 3.12 goals against average, and a .907 save percentage.
After a rough start, the Canucks have won five of their last six games. They’re not far out of a playoff spot, aided by widespread incompetence across the Western Conference, and head coach Bruce Boudreau now has a tricky decision to make. Does he ride the hot hand of Martin or trust his franchise goalie Demko?
While a goalie controversy in Vancouver was on no one’s radar to start the season, there can now be a legitimate debate as to what direction the Canucks should go. While Martin isn’t about to make 60 starts and push Demko to a backup role, he has played well enough for there to be a case for a platoon.
This is a complicated situation for Boudreau and one that could cost him his job if he handles it poorly.

Thatcher Demko is the Canucks franchise goalie. He’s in the second season of a 5-year contract worth $25 million. That makes him tied for the 14th highest-paid goalie league-wide, firmly in starter territory.
On many occasions in the past, Demko has bailed the Canucks out of terrible situations. There have been many struggling defencemen on the Canucks that owe Demko for hiding their mistakes and helping their numbers. Now that he’s going through a rough patch of his own, he hasn’t received that same support from his team. The Canucks often play fast and loose and it’s a large ask to succeed behind this system.
Despite this rough stretch, confidence in Demko still remains high. He will almost undoubtedly return to elite form, and playing through this rough patch may be just what he needs. There were people ready to ship out Elias Pettersson last season after a rough start, but he recovered and put together an elite second half of the season. Even the best go through rough patches but their ability to bounce back is what makes them great.
Moving Demko and Martin into a 1A-1B situation is only going to affect the 26-year-old Demko’s confidence in a negative manner and force him to miss out on key reps. If the Canucks are going to make it to the playoffs, they’re going to need a run of stellar goaltending. Demko is the one who offers the best chance at that happening over the long run.

The case for a more even split between Demko and Martin

Spencer Martin has been the better goaltender this season. As it stands right now, playing Martin gives the Canucks a better chance to win compared to starting Demko. Through 14 Martin starts over the last two seasons, the Canucks have managed to get 22 of a potential 28 points, only losing in regulation a single time.
While Martin isn’t playing out of his mind, the team has been winning with him in the blue paint. The Canucks have played better in his starts and even Demko has been very complimentary of his play.
“Marty’s [Spencer Martin] been playing awesome and guys have been rallying around him for sure,” Demko said after his own win against the San Jose Sharks on Sunday. “I’ve been trying to help him out as much as I can.”
The difference in success of the two goalies over a two-month sample size is too much to ignore and the Canucks have no choice but to go with a relatively even split if they want the best chance to win.
The reality of the situation is that the Canucks’ rough start means they need to dig themselves out of a hole. They can’t afford to wait for Demko to find his way through these struggles with every point being so valuable. They need to play the goalie that gives them the best chance to win on any given night, and this year, that goalie has been Martin.

There’s a compelling case to be made for both sides of the discussion. Boudreau’s position is not one to envy, especially with the pressure of being fired hanging over his head.
Saying that, it’s clear that Boudreau needs to continue with Demko as the starter and give him at least 60-70% of the starts moving forward. His numbers are not that different from Martin’s at 5-on-5. One contributing factor in the massive discrepancy between the two goalies’ records has been the run support.
Over Demko’s 14 starts this season, the Canucks are averaging 2.93 goals per game. Meanwhile, during Martin’s 8 starts, the Canucks have scored 4.75 goals per game.
Demko is too talented to not turn things around. This is a different answer if Demko is playing injured, but as it stands, the best move is to show him the coaching staff’s full confidence and have him remain as the team’s clear number-one starter.
Editorials
Recent articles from Noah Strang