Henrik Sedin speaks about the Canucks’ core group, his role, and being on the other side of contract negotiations 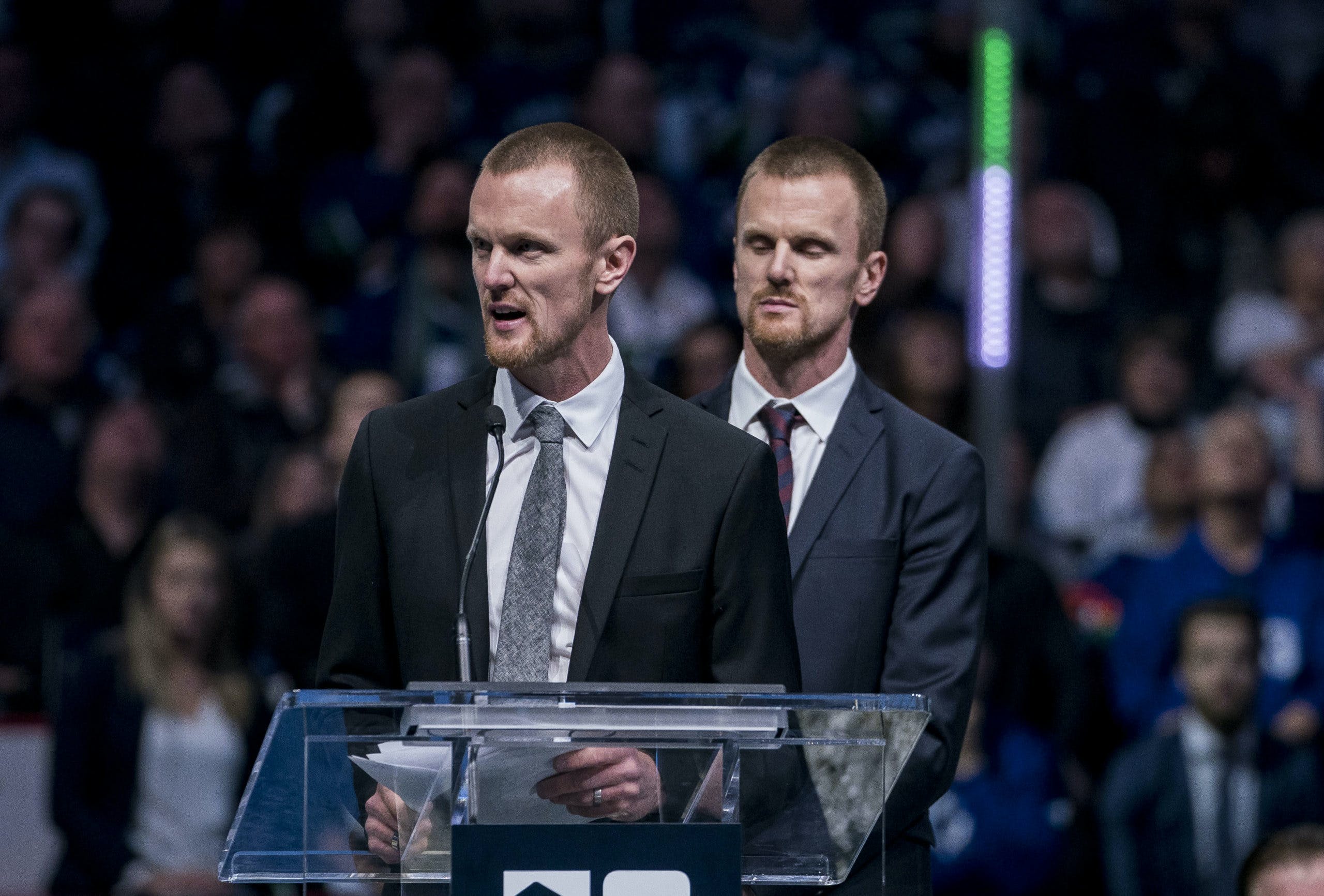 By David Quadrelli
1 year ago
Henrik Sedin joined Thomas Drance on this week’s episode of the VANCast, and talked about a number of topics that are of interest to Vancouver Canucks fans.
The former Canucks captain turned Special Advisor to the GM said the timing was “perfect” for he and his brother Daniel to return to the team.
“We really care about this team to this day. Even though we’ve been away for a couple years, like I said we followed the team closely,” said Henrik. “If you stay away for too long, I think, the game gets away from you. There’s new guys coming in with this new generation. And we still felt we knew a lot of players, we knew the league, what it was all about, so the timing was just perfect for us.”
Henrik was asked if he’s at all surprised to see so many of his former teammates from the 2011 run moving on into different roles around the game, to which he said “no, I would say no.”
“It was a special team, our leadership was so strong and there wasn’t just one or two or three guys who led that team, it was a group of us. So that’s, that’s why I’m not surprised to see the kind of roles they’ve taken. Like I could see Burr as a great coach. The way he thinks the game and I think he’s in a good spot right now, so I’m not surprised. I think like I said, we had a special group. During those years, I think we all learned from each other.”
Henrik added that he feels he and his former teammates such as Roberto Luongo, Manny Malhotra, and Alex Burrows are able to “look past” the teams they’re currently employed by and pick at each other’s brains because they’re all still good friends.
The Sedins have been extremely busy right from their first day on the job back in July, and they tried to soak in every bit of their first draft and free agent frenzy.
“They’ve been so welcoming. Weis [AGM John Weisbrod] really let us be a part of it, the weeks leading up to the draft, all the interviews, and asking questions, sitting in on all the meetings. From there, when free agency started up — negotiations and everything — we sat in with Jim [GM Jim Benning] and the whole group in there, listening to other GMs calling, agents calling, all that kind of stuff that’s so interesting to sit in and listen to.”
Henrik also added that he’s “confident” that newly acquired defenceman Oliver Ekman-Larsson can bounce back with a change of scenery.
“I always liked him as a player of course, we all like him. He’s a top defenceman in this league. His game has gone a little sideways the last couple of years. I think that’s another thing — you’ve got to see why that happens and try to get a read on why those things are happening. He’s only around 30 years old, he’s not old for being a defenceman, and if you look at him, there’s reasons why his game has gone a little bit down lately, but I’m confident that he can bounce back, and that’s why we’re so happy to have him here.”
Henrik later discussed how odd it is to now be on the other side of negotiations between two star players represented by CAA — the company that represented Henrik and Daniel and now Elias Pettersson and Quinn Hughes — and the Canucks.
“That’s been very interesting, to work from the other side with J.P. and Pat. We worked very closely with J.P. over our careers so we know what he’s about, he’s very honest. In the end, he’s going to work for the players but he understands the situation for the team and where the team is too so I think it’s good for both sides to have experienced agents like that working for those guys.”
Finally, Henrik outlined his expectations for the team this year, and as it so often was anytime he or Daniel spoke publicly, it’s exactly what Canucks fans want to hear.
“We all know for the team to take the next step it’s all about your best players becoming even better, that’s the only way around it. If you want to win, your top guys need to get better. That’s not only for this team, it’s every team around the league. It doesn’t matter who you bring in, whether that’s Oliver Ekman-Larsson, Dickinson, Garland, or anyone. The core group is here and it’s their team. They need to take charge and lead the way.”
You can listen to the full interview with Henrik Sedin here.
Uncategorized
Recent articles from David Quadrelli