Have we been looking at Bo Horvat the wrong way for his entire Canucks career? 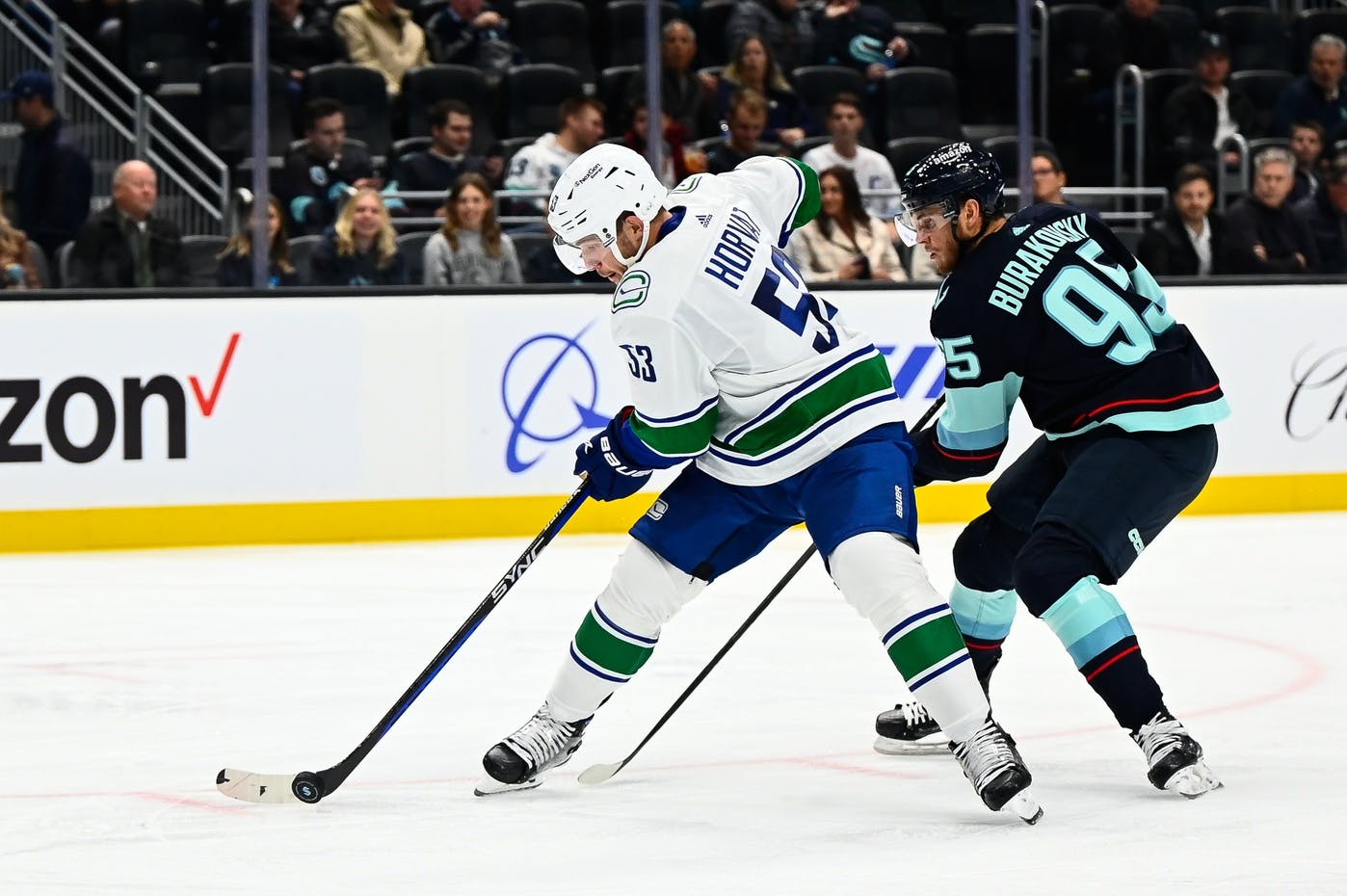 By Stephan Roget
2 months ago
Welcome to our editorial content, presented by NHL odds site Betway!
It wasn’t supposed to be this way.
As the Vancouver Canucks wrestle with the idea of trading captain Bo Horvat, one can’t help but look back on his nine seasons with the Canucks thus far and feel a pang of regret.
In fact, it’s hard not to look at the situation and wonder — in the immortal words of Bill Huan — “what if?”
Over the past decade of Canucks hockey, there have been countless opportunities to think about “what might have been.” But when it comes to Horvat specifically, the most important ponderance is probably this one:
“What if expectations for Bo Horvat weren’t misplaced from the moment he was drafted?”
Or, put differently, that could be read as:
“What if Vancouver fans saw and appreciated Horvat for what he was, instead of what they were mistakenly told he was going to be?”
Right from Draft Day 2013, Horvat was lauded as the next big two-way center. A regular feature in future Selke Trophy conversations. A defensive beast. The next Patrice Bergeron, if you will.
Flash-forward to the present day, and Horvat is getting shredded by some in the local media for his current level of defensive play.
Yes, Horvat has 14 goals in 18 games, second only to Connor McDavid. Yes, he’s leading the entire league in road goals. Yes, he’s scoring at the highest points-per-game rate of his career at the age of 27.
But when the expectation is that you do all of that AND play in your own end like a shutdown stud, it doesn’t really matter. The potential for disappointment is always going to be there.
Which brings us to our general point: that placing such expectations on Horvat is not just unreasonable, but that it’s always been unreasonable.
The notion that Horvat is some two-way prodigy is, and always has been, a false one. He has simply never been that player, and folks thinking that he is has been the result of nothing more than a big ol’ game of hockey telephone, as years’ worth of misinterpretations have coalesced into an entirely untrue narrative.
Back before he was drafted, and certainly in the immediate aftermath, folks were already hearing about Horvat’s defensive prowess. However, if one goes back and actually checks his OHL record with the London Knights, one will find a very similar Horvat to the one that exists today. He was a goal-scoring, power centre with some serious leadership chops, and that’s all that he was. His defensive capabilities at the OHL level were much like his current defensive capabilities in the NHL: fine, but nothing to write home about.
The idea that he was some junior hockey shutdown god likely arose from the fact that Horvat was perceived as playing second fiddle to Knights’ teammate Max Domi, with the basic assumption appearing to be that, since Domi was cast in a more offensive role, Horvat must be providing something slightly different to the Knights’ lineup. In reality, the Knights were just lucky enough to have two number one scoring centres. But combine that with Horvat’s vaunted high character reputation, and it’s easy to see how people just started assuming he was a two-way center and ran with it.
By the time he made it to the NHL, that expectation was solidified. It wasn’t too terribly long after Horvat arrived in Vancouver that he started to be handed tough matchups, defensive faceoffs, and outright shutdown assignments, taking them off the plate of veteran players like Brandon Sutter.

Throughout much of his early career, the results were exactly what one might expect from a player who didn’t play a checking centre role in the OHL suddenly being asked to master one at the NHL level: not good. Horvat spent his first several years in the league getting caved into his own end against top-tier competition.
Through it all, Horvat grew into the role. His defensive numbers slowly but surely increased, but he only ever really had one singular season in which his own-zone performance could truly be called “good,” and that was last season.
Any other time, he’s played like a player doing his darnedest to fill a role he’s not really suited for. It’s not as if Horvat has been taking the place of other, more capable shutdown centers. He’s been all that the Canucks have had in this regard for a long, long time, and he’s done his best.
So, what if he were celebrated for that? What if that expectation of grandiose defensive play had never existed, and Horvat’s defensive play was rightly seen as still significantly better than that of the average offensive superstar?
Try looking at it this way: imagine that Horvat wasn’t Horvat, but was someone else entirely. Imagine having a player score as much as he did and then, because of a lack of two-way skill elsewhere in the lineup, was also asked to take on some matchup duties on top of that.
Imagine seeing that player face far greater than average competition… 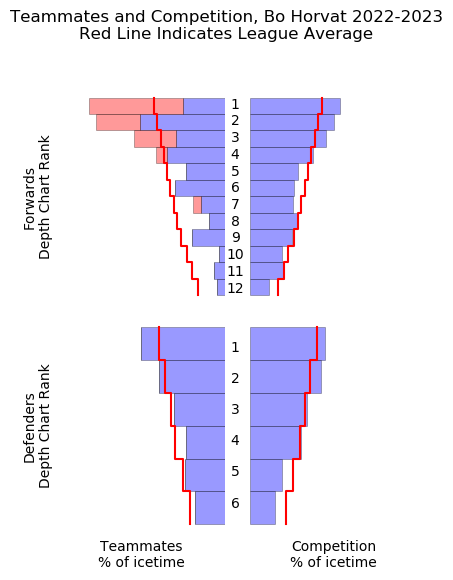 From HockeyViz.com
…and still skate out of it doing passably okay, and without it taking away from their offensive production at all. Horvat’s possession numbers have been in the negative this season, but he’s still scoring more goals than he’s letting in, and that’s with serious aggravating circumstances to his deployment.

From NaturalStatTrick.com
Imagine if that player’s metrics remained in line with the majority of their career’s standard — with last year being a notable outlier — despite the increase in difficulty and in spite of the increase in production.
Imagine if that same player was also a vocal leader, a power play specialist, a capable penalty killer, and literally won more faceoffs than the rest of the team combined.
Now, imagine all that and imagine being disappointed with that player because he’s not even better at all the things they are being asked to do.
It’s impossible. And that’s the impossible standard of expectation that has been placed on the shoulders of Bo Horvat for his entire career with the Vancouver Canucks.
Before we take off, we’d like to get really strange here, if you’ll allow it. In keeping with our “What If…?” theme, let’s wander through Uatu the Watcher’s halls of possibility and take a glimpse into a universe in which Canucks fans weren’t saddled with the faulty expectation of Horvat becoming the next Patrice Bergeron.
Observe…:
“Greetings, my fellow Canucks fan. Say, isn’t it swell, having a 30+ goal scoring, power centre on the team? Gosh, that Cory Schneider trade really paid off in the end, hey?”
“Not only that, my compatriot, but Horvat — unlike most elite snipers — can provide passable defensive play against better-than-average competition.”
“Geez louise, I bet his coaches really appreciate that non-central component to his game. Say, can you believe he’s also one of the best faceoff specialists in the entire NHL?”
“I can believe it, thanks to his leadership qualities and dedication to the game.”
“Gee willikers, we sure are lucky to have Bo Horvat. I hope our GM re-signs him for a long time.”
“Me too.”
The end…?
Editorials
Recent articles from Stephan Roget