The great Kuzmenko debate: Should the Canucks trade the first-year sensation or not? 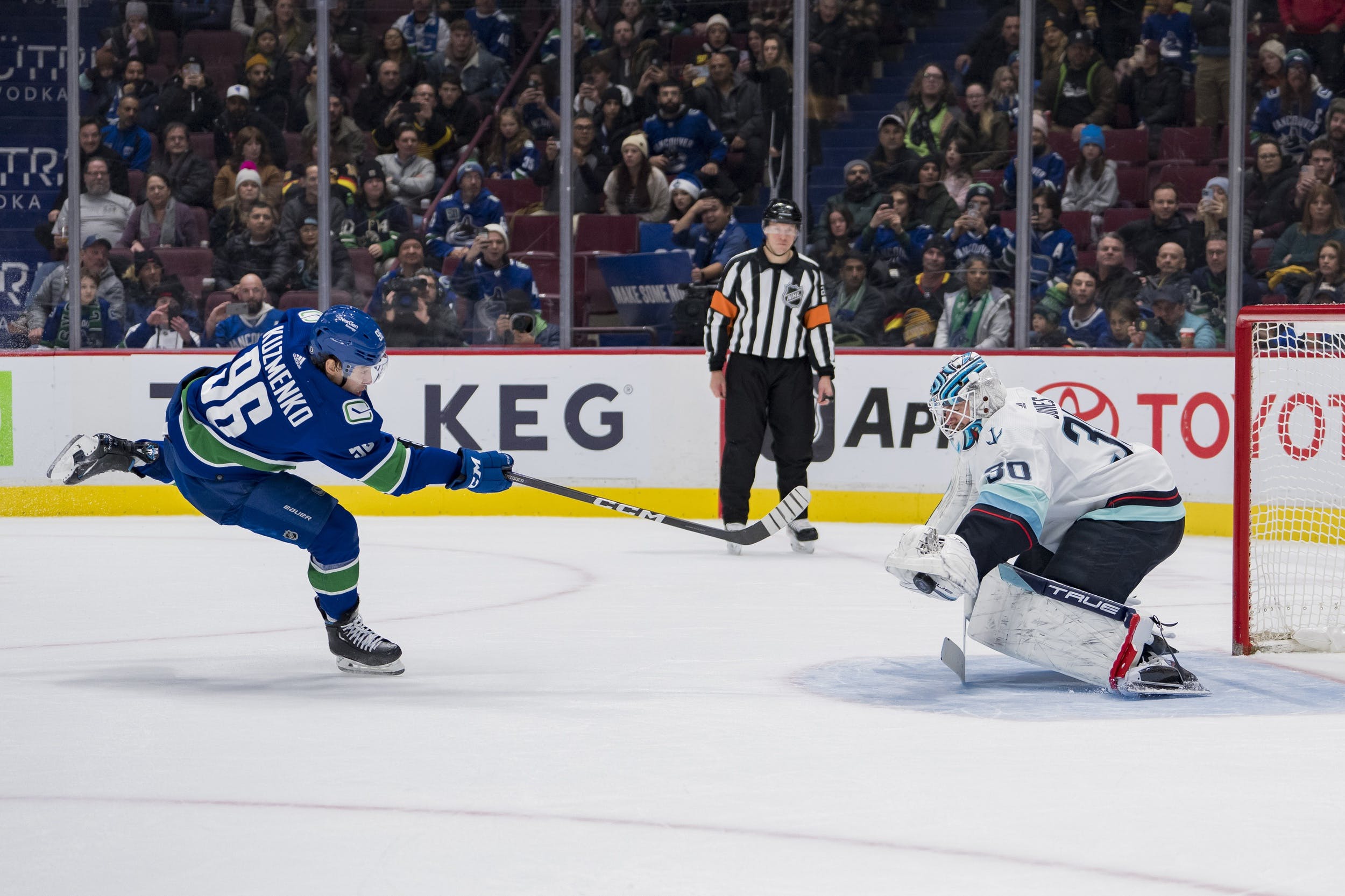 By Stephan Roget
1 month ago
It’s not as if we here at CanucksArmy have been avoiding the subject of trade talk. We’ve discussed potential moves for JT Miller, Bo Horvat, Conor Garland, Brock Boeser, Luke Schenn, Tyler Myers, and even Thatcher Demko already this season.
But if there’s one particular bit of trade talk that we’ve been dragging our collective heels on, it’s the question of what to do with one Andrei Kuzmenko.
In fact, it’s a little bit more than a question. It’s a great debate. And we’re going to frame it that way.

The reasons for trading Andrei Kuzmenko

We can sum up almost this entire position by making a single, smaller argument: Andrei Kuzmenko will probably never be as valuable in a trade as he is right now.
Think about it.
As of this writing, Kuzmenko has 14 goals and 29 points through his first 32 NHL games, good for fourth on the Canucks in scoring and a 0.91 point-per-game average.
If Kuzmenko were an actual rookie, he’d be four points up on Matty Beniers for the league lead in rookie scoring. Unfortunately, Kuzmenko is ineligible for rookie honours at the age of 26, but more on that later. It’s still an impressive distinction, asterisk or not.
Then there’s the contract to consider. Kuzmenko is on a one-year entry-level contract with a cap hit of just $950K for now (with more presumably coming in performance bonuses.) Following the completion of this season, Kuzmenko becomes a UFA if not extended.
Put it altogether, and you’ve got yourselves the ultimate forward rental at the Trade Deadline.
How many PPG-ish forwards are usually available at the deadline? Not many.
How many of them are still within their prime scoring years? Very few.
How many of those few are available at a sub-$1 million cap hit? Pretty much just Kuzmenko.
It’s not just that Kuzmenko is a particularly good Trade Deadline target, or even a stellar one. He’s a truly unique quantity, the sort of Trade Deadline target that only comes around every few years.
There’s also style of play to consider. Kuzmenko is a complementary scorer, capable of being thrown onto a line with skilled players and helping to elevate their production. He’s proven an ace on the power play. Any playoff-bound team with questions about their own offence has to be looking at Kuzmenko as not just an answer, but the answer.
So, that clearly establishes that Kuzmenko has immense value right now. But why is it the most value he will ever have?
As soon as this season is done, Kuzmenko is going to sign a larger contract with one NHL team or another. Expect an AAV well over $5 million and a decent amount of term as a starting point. Right now, the Canucks have exclusive rights to talk extension, and there are many who believe that re-signing Kuzmenko is the right way to go.
But as soon as that contract is signed, trading Kuzmenko becomes a more complicated prospect, and that’s even if he maintains his current level of production. Any slip, and we all know how that goes.
Kuzmenko will be 27 by the time his next contract is signed. That might still be within his prime years, but it’s also getting rather close to their anticipated end. Kuzmenko may be a first year NHLer, but he’s older than most, and he will probably start declining sooner than most expect.
But none of those complicating factors will ever enter into play if the Canucks trade Kuzmenko now, when his value is very likely to be at its highest ever.
And, hey, the Canucks can always take a run at Kuzmenko as a UFA in the summer post-trade, too, if they really want to keep him around. Sure, they could be outbid, but there’s been no indication as of yet that Kuzmenko’s camp is interested in any sort of hometown discount anyway, so what difference would it make?

The reasons against trading Andrei Kuzmenko

We also think we can keep this side of the argument pretty short and sweet: Andrei Kuzmenko is part of the solution in Vancouver, and should be held onto for dear life.
Few players exude positivity quite like Kuzmenko. It’s not just about the scoring, although the scoring is impressive. It’s not just about the chemistry. It’s about his outlook, his personality, and that all-star smile. Even when times are tough for the Canucks, it’s hard not to have fun watching Kuzmenko play hockey. Canucks fans need stuff like this, because it’s been so absent in recent years.
But let’s get back to the hockey. Kuzmenko has been a revelation, far outstripping even the most optimistic expectations placed on his first season. In his first taste of North American hockey, having moved across oceans and continents, Kuzmenko stepped into the NHL like it was nothing special. To wit, Kuzmenko’s current rate of production is higher than that of any of his KHL seasons, save for the last one.
It’s tempting to think that Kuzmenko hasn’t had to experience any sort of adjustment period in transitioning leagues. That would be notable in and of itself, and a testament to Kuzmenko’s ultimate adaptability.
A far more exciting thought, however, is that Kuzmenko is experiencing an adjustment period, and that his current rate of production is only a glimpse of his full potential. The best may still be yet to come.
But what this is really all about is Elias Pettersson.
If Pettersson wasn’t the Canucks’ franchise player coming into this season, there isn’t much doubt left now. Rebuild, retool, remake the mistakes of the past; no matter which path the Canucks choose, Pettersson has to be at the center of it.
And Pettersson and Kuzmenko have undeniable chemistry.
It’s obvious to anyone watching that Pettersson and Kuzmenko enjoy playing together and elevate one another’s game. If the team is going to build around Pettersson, why not start with the player he plays best with? Especially considering that said player is just a couple of years older than Pettersson. It’s not hard to imagine these two riding shotgun with one another for at least another half-decade to come, and who wouldn’t want that?
It’s important to remember that Kuzmenko ultimately chose Vancouver over any other NHL destination. If he is open to an extension, and his demands are anywhere near reasonable, the Canucks need to re-sign him long before the Trade Deadline, and long before Kuzmenko gets a sniff of the open UFA market.
Start with this easy choice, and sort the rest out from there.

There are no obvious options here, so we’ll take the cheap one.
Really, this debate is impossible to come to a conclusion on without knowing the intimate details of ongoing contract negotiations with Kuzmenko’s camp…and we do not have that information.
So, let’s just end by saying that keeping Kuzmenko is a desirable option, and one that the Canucks should be very open to. The threshold for what an acceptable contract extension is should be very high, and the Canucks should be trying to get negotiations to that point as quickly as possible.
If, by the month of the Trade Deadline, negotiations haven’t gone anywhere, then it’s time to switch tactics and start thinking about Kuzmenko as a tradeable asset.
Either way, it won’t be a comfortable decision. But it will be a vital one.
Editorials
Recent articles from Stephan Roget