Getting the most out of J.T. Miller could be Rick Tocchet’s biggest test 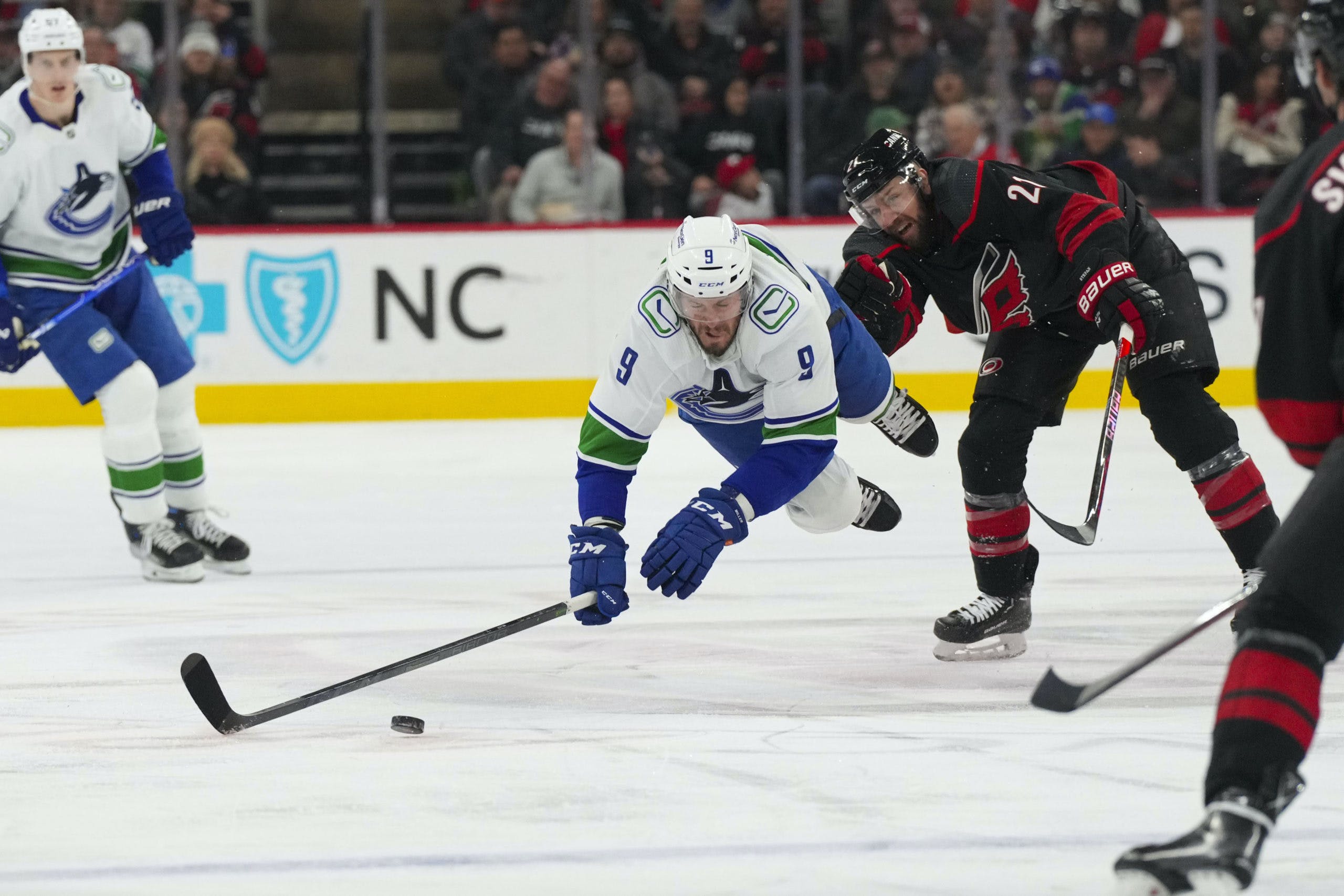 By Noah Strang
1 day ago
On Monday, Vancouver Canucks unveiled new head coach Rick Tocchet in a press conference. The NHL’s worst-kept secret was finally revealed as Tocchet officially stepped into the head coach role for the Canucks. He will inherit a team that is 2-8-0 over its last ten games, has a -27 goal differential on the season, and is on pace for fewer than 70 points.
There will be many challenges for Tocchet over the coming weeks. He will be judged on how he handles many different situations around the organization, but none will be more scrutinized than his relationship with forward J.T. Miller.
Miller’s frustration has bubbled over many times this season in very public ways. His play on the ice has fallen off as he’s failing to create at 5-on-5 while also making numerous egregious defensive mistakes. When the organization decided to bring in a disciplinary coach like Tocchet, the ability to be hard on those types of errors was certainly considered.
If Tocchet can get Miller and his hefty extension playing at his best, he will be a saviour for the team. The only question is if Tocchet and Miller’s large personalities will clash or mesh well.

To Miller’s credit, he’s been frank about his struggles this season and seems willing to accept Tocchet’s guidance. After his first practice with the new head coach on Monday, Miller spoke to the media and gave some interesting comments that showed he’s been reflecting on this season.
“There’s been a handful of moments this year that have really defined my season,” Miller said to Sportsnet on Monday. “I understand in this market, this is what you’re going to get. But that’s not my character to play like that. There’s plenty of times where I’m hauling my ass on the backcheck. But the bad ones are bad. Like, I know they are.”
Starting next fall, Miller will be on a seven-year extension worth $8 million per season. The Canucks need him to be better at five-on-five, defensively, and as a leader to ensure that his contract doesn’t become a burden before it even begins. Having a coach that holds him accountable and keeps him in check may be just what Miller needs to turn his play around.
“It has been very hard emotionally,” Miller commented when talking about this season. “It just feels like we’re stuck. But I think that slowly, if you try to envision the big picture here, it’s going to go the right way. I want to be here when we’re at the top because I still believe at some point this team has the core pieces to win. I don’t know what it’s going to look like here the next couple of months; it might get a little muddy in the water again. But at the same time, I’m here for the long haul because I believe in the process.”

While former head coach Bruce Boudreau was known as a player’s coach and played a fast-and-loose style of hockey, Tocchet has a very different approach. The Canucks will likely employ a much more structured style, one that may help cover up some of the team’s defensive warts but also make it more difficult to create offence.
Having a coach that isn’t going to let outbursts and tantrums fly without consequences can be helpful for an emotional player like Miller. After a long NHL career, Tocchet knows the ups and downs of the NHL better than anyone.
“I was an emotional player,” Tocchet said recently when asked about Miller. “There’s different emotion, you know? It’s okay to have emotion on the bench and tell your linemate ‘let’s go’, but I think on the ice you’ve got to be careful with your body language. If you’re upset, it doesn’t mean — and I’m not just talking about JT — I’m just saying with your body language, you can’t stop backchecking because you’re mad at something, that’s one of my rules.”
Connecting with Miller will surely be near the top of Tocchet’s to-do list. Miller is uber-talented and when channeled correctly, his passion and energy can push the team to great heights. The struggle will be connecting with Miller in a way that gets him motivated to do so, especially long term.
After Monday’s practice, Tocchet spoke about the need to build relationships with players while also holding them accountable.
“It’s all about relationships in this game,” Tocchet said. “Yeah, X’s and O’s and all that stuff, I get, but players have a voice, you know, they should have a voice and it should be a partnership, but there’s some mindsets and stuff like that, that have to be non negotiable. And I think these guys understand that in the short time that I’ve been here, I’ve explained to them that as much as we’re gonna be a partnership, and you guys are gonna have a voice, there’s some stuff that are non-negotiable stuff that they’re gonna have to make sure that they adhere to the team, to be a team.”
It’s clear that a stronger set of rules and structure will be imposed on this current Canucks roster. With the season in shambles, it will be interesting to watch how the team reacts to this new environment. The Tocchet era starts tonight as the Canucks take on the Chicago Blackhawks at 7 PM Pacific.
Editorials
Recent articles from Noah Strang