Four Canucks storylines that everyone should be thankful for this Christmas 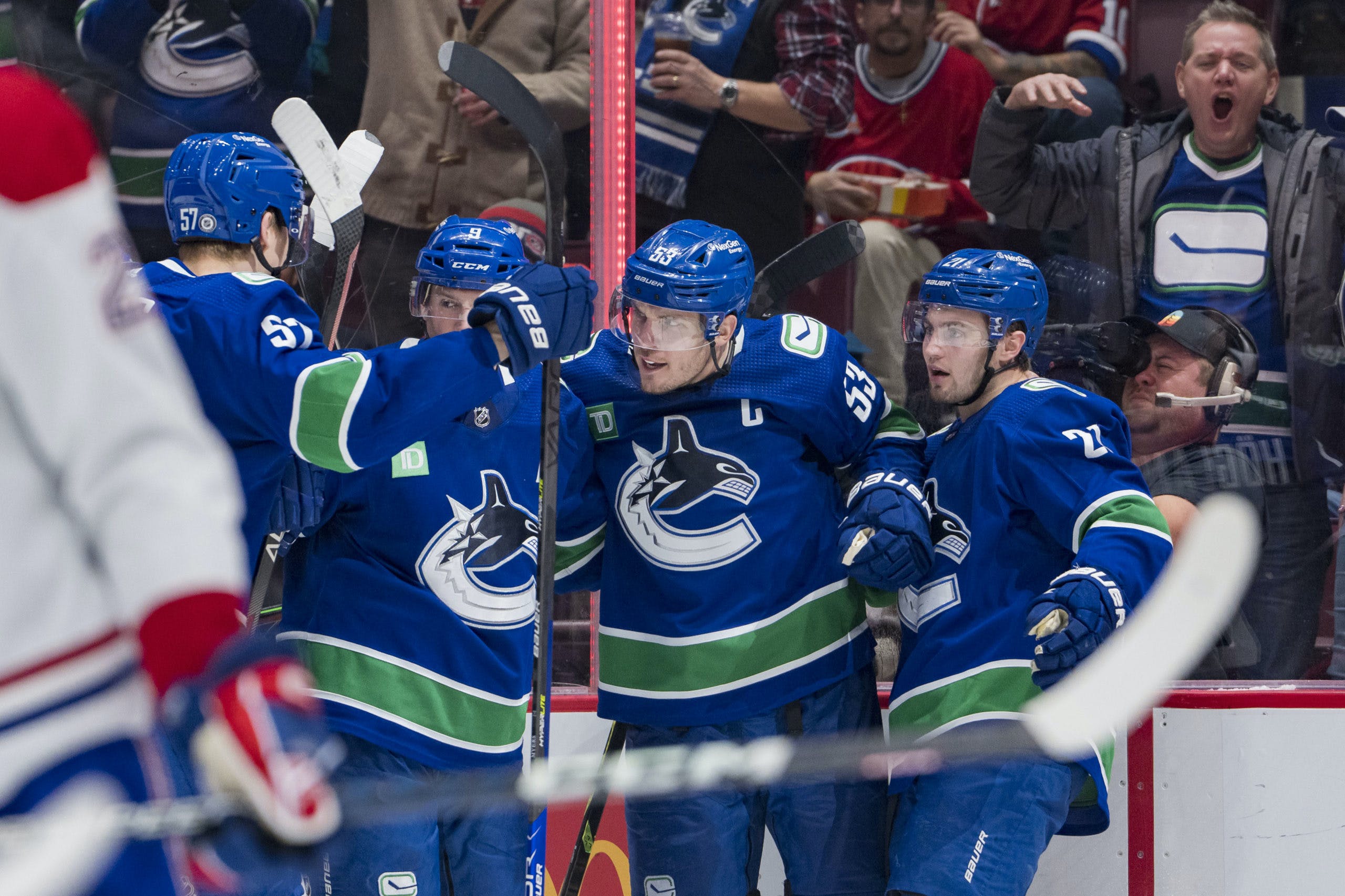 By Bill Huan
1 month ago
It feels like the puck was dropped yesterday to begin this season, but Christmas is somehow upon us already!
To celebrate, let’s look at four Canucks storylines that should boost your holiday spirits, and what better place to start than Kyle Burroughs’ DAWG rating?

Burroughs has that DAWG in him!

Oh, you thought we were going to reveal the DAWG formula here, didn’t you?
Not so fast.
Faber’s keeping his revolutionary stat close to the vest, and scientists will be trying to decrypt his secret for centuries to come. Legend has it that he keeps the formula in the same vault in which Coca-Cola hides its recipe, although I’m sure you can bribe the man by feeding him some better intermission snacks.
So far, Burroughs has been one of the leaders in DAWG, and he’s held up his own in some more conventional stats too. The defender has an expected goals against per hour of 2.63 at five on five, which is the fourth-best mark on the team and second among blueliners.
His actual numbers paint a bleaker picture, as the Canucks have conceded 2.99 actual goals while scoring an anemic 0.92 per hour. However, those figures have been anchored by an unsustainable PDO of 0.935, the lowest on the team. The Canucks currently have an on-ice shooting percentage of just 3.17% with Burroughs playing, which is due for some positive regression.
He’s arguably been the club’s most unlucky player when considering they have an expected goals percentage of 47.19% with him on the ice (fourth on the team), and yet their actual number is 23.5%. Of course, a part of that is caused by Burroughs’ nonexistent offence, but there’s no way any player will continue to see a discrepancy of over 30% between their actual and expected figures with a large enough sample size.
Plus, he’s still been a positive defensively for a club that struggles to keep pucks out of the net. For someone who’s paid to be a depth piece, that deserves praise — especially considering Burroughs often gets matched up against middle and top-six competition.

By now, we all know about Andrei Kuzmenko’s surprisingly hot start with the Canucks. He’s first on the team at five on five in corsi at 51.91%, second in actual goals percentage at 58.14%, and second in expected goals percentage at 51.05%.
What’s even more encouraging, though, has been his improved play without Elias Pettersson. We’ve already talked about how his progression for the rest of the season is a crucial storyline to monitor and highlighted his individual performance (especially defensively) away from Pettersson as a specific area to watch out for.
Well, over the past month, Kuzmenko has started to find his footing without the Swede. Through his first NHL 15 games, the Russian was basically attached to Pettersson’s hip, as he only played 40 minutes of five on five without him. During that span, the Canucks gave up 2.95 expected goals per hour, which was actually a lot better than the expected number of 4.61.
Since then, Kuzmenko has played an additional 17 games with much better numbers. In 88 five-on-five minutes away from Pettersson, the Canucks have let in the exact number of goals per hour as expected: 2.03. Although the team has also scored at a below-average rate (2.03 actual goals per 60 minutes, 1.35 expected), it’s still encouraging to see Kuzmenko’s improved two-way play since that was the biggest question mark surrounding his game coming into the season.
If the Russian continues to improve his overall game as the year progresses, it’ll be interesting to see how the Canucks handle his contract negotiations. Considering everything that has happened with this team in recent years, though, that’s a good problem to have.

Horvat’s evolution into an elite scorer

Raise your hand if you had Horvat scoring 24 goals in 33 games to start the season on your bingo card.
Now lower them, you liars, because no one saw this coming.
This isn’t just a hot streak, either: including the final 18 games of last season, Horvat has scored a whopping 38 goals in his last 51 regular season games played, which is good for 61 goals over the course of a full 82-game season.
Are Horvat numbers a bit inflated? Sure, considering that he’s scored ten more goals than expected this year and is currently shooting 23%, with last season’s 15.90% being his previous career high. With that said, the sample size is now large enough to legitimately consider Horvat to be at least a 40-goal scorer, and one who could even flirt with 50.
He’s added a level of deception to his shot and has developed a better feel around the net, so it’s within reason to think that he could vastly outperform any expected goals data available. 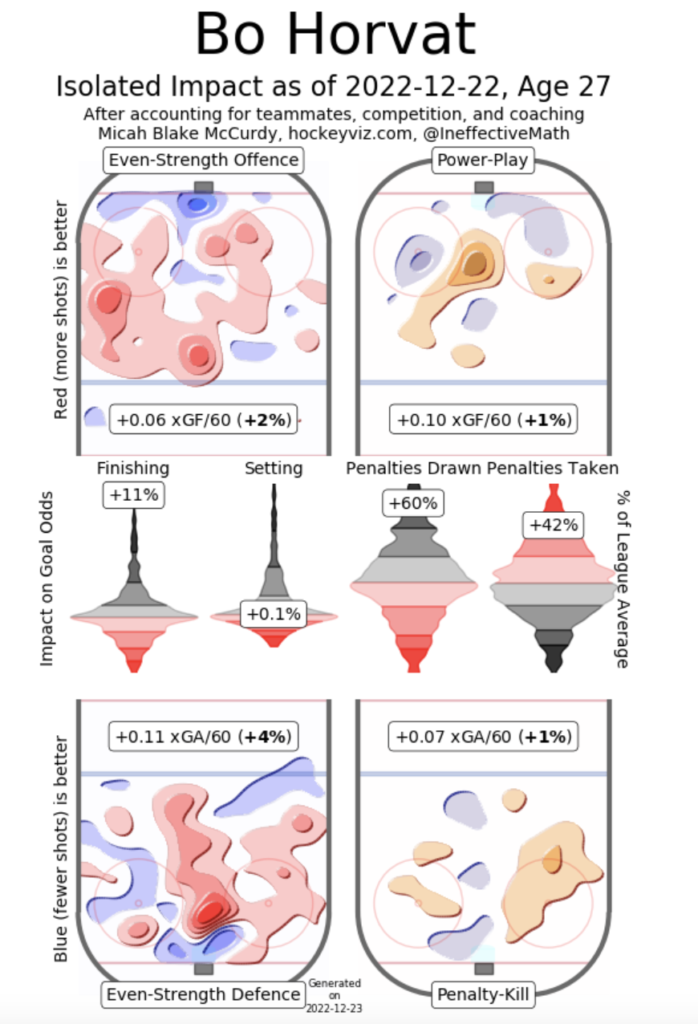 As you can see, public analytic models continue to underrate his offensive impact since it only accounts for the type of chances that Horvat creates, but not his elite finishing. Defensively, the Canucks’ captain can only be described as competent, but unlike the past, he’s now able to singlehandedly outscore any warts in his two-way play.
In fact, Horvat has never had an expected goals percentage at five on five of over 50% in any year of his career, but he’s been a positive in actual goals in four of his nine seasons (including this one) due to his finishing. Now that Horvat’s blossomed into a legitimately deadly sniper, there’s no need to worry as much about his pedestrian underlying numbers.
More often than not, he’ll just outscore his issues anyway.

With Elias Pettersson playing at five on five, the Canucks have outscored teams 29-20.
Without him? They’ve been outscored 42-65.
In basketball, a sport that can be dictated by a single player unlike any other, those types of on/off numbers are common among the best players.
But in hockey? They’re far and few between.
Pettersson hasn’t just blossomed into a superstar this season — he would be a legitimate MVP conversation if the Canucks somehow made the playoffs. He’s on pace for 108 points this year and has racked up 42 goals, 53 assists, and 95 total points in his last 82 regular season games.
Conor Garland, Kuzmenko, and Pettersson are the only three Canucks players with a corsi over 50%, and there’s no doubt that the Swede faces much tougher matchups than the others. More impressively, Pettersson is fifth league-wide in goals for per 60 at 4.27 among all players who’ve played at least 300 minutes at five on five this year. His goals against of 3.04 is higher than what you’d like, but that’s partly been caused by an on-ice save percentage of just 0.899%.
Make no mistake, though: he’s been elite at both ends of the ice. Just take a look at his RAPM chart, which shows a player’s isolated contributions by factoring in his deployment and playing environment. 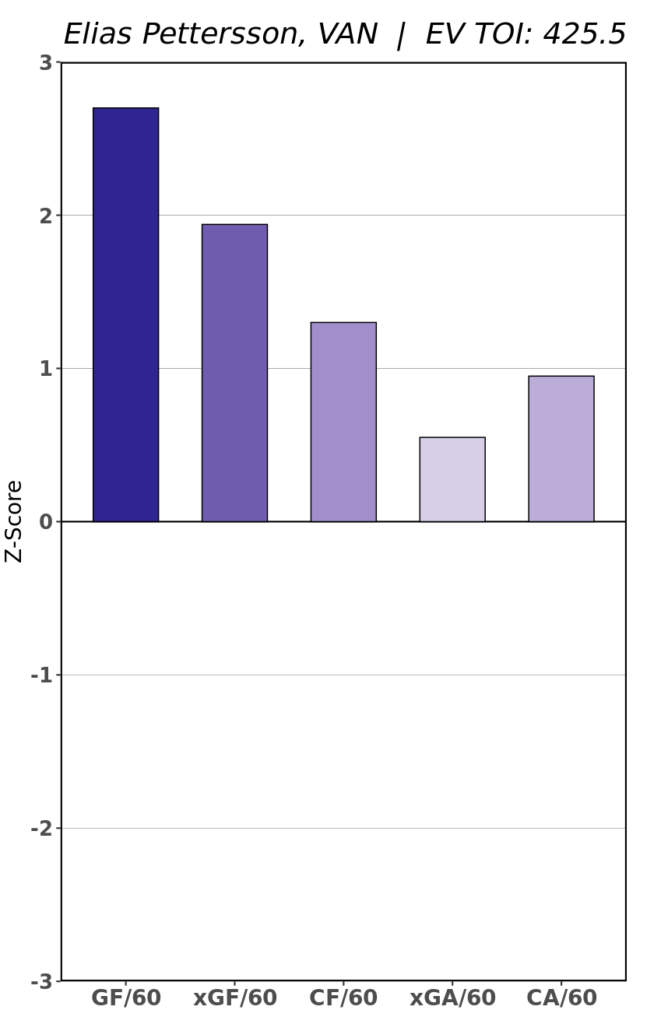 Another crucial aspect of Pettersson’s superstar leap has been its impact on his teammates. Opposing teams are now selling out more than ever to cover him, opening up space for others to make plays.
None of his underlying stats shows anything unsustainable, either. Yes, his five-on-five shooting percentage of 17.74% is a tad higher than his career norm, but he shot at an even ridiculous rate during his sophomore campaign at 19.35%. Amazingly, Pettersson’s production could actually increase considering he still hasn’t scored a power-play goal yet, although he has 11 assists to boot.
So, it’s time to sit back and enjoy the show. Elias Pettersson has arrived.
Stats courtesy of Natural Stat Trick, Evolving-Hockey, and HockeyViz.
Editorials
Recent articles from Bill Huan