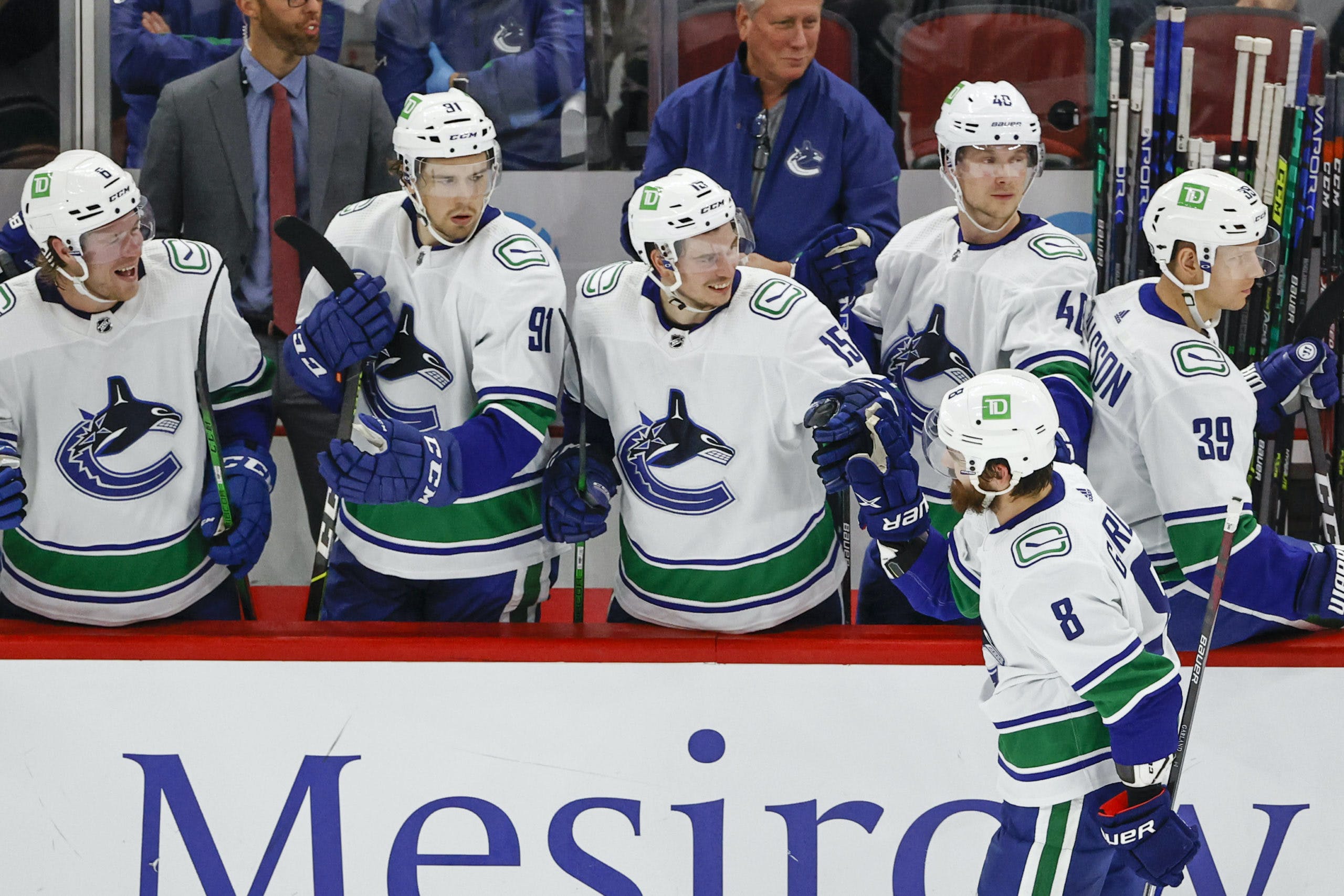 By Lachlan Irvine
1 year ago
The Vancouver Canucks’ 4-1 win over the Chicago Blackhawks last night was more than just a mini-slump buster. It was a much-needed victory for a team that had started their season having given up seven out of a possible eight points, and coming off an embarrassing effort on Tuesday against the Buffalo Sabres.
With Vancouver through their first five games of the year, it’s time to start taking stock of where this team is at. The Canucks’ 2-2-1 record is good enough to put them third in the Pacific Division, but a few underlying problems need to be addressed as the team moves forward into the year and starts to face much stronger opponents than the likes of the Sabres and Blackhawks.
But that’s not to say it’s been all bad. There’ve also been a few individual performances worth highlighting in the early going, that hopefully will start to rub off on the rest of the roster as the Canucks head into the real grind of the season.

During the preseason a lot of eyebrows were raised about the play of Nils Höglander. He looked uncomfortable, was having difficulty controlling the puck, and wasn’t playing with the same fire we’d gotten used to seeing from him during his rookie season.
But as soon as the real games began, those concerns went away.
While Höglander hasn’t scored any goals so far, he’s consistently been one of the Canucks’ most dangerous offensive threats throughout. He currently has the highest Corsi percentage of any Canuck forward according to Natural Stat Trick, as well as the fourth most shot attempts.
When asked about Höglander’s role last Wednesday, Travis Green said he’d “like to keep Hög between 14-18 minutes and move him around to kickstart lines,” which might as well be the NHL coach equivalent to saying he’s worthy of lifting Thor’s hammer Mjolnir. Teams place a whole lot of value on forwards who can play with a variety of teammates and bring a jolt of energy, and between Conor Garland and Höglander, the Canucks certainly look like they have that role covered.

A Hughes-less defence is scary to watch

Obviously, having Quinn Hughes in your lineup is preferred to not having Quinn Hughes in your lineup. But on Tuesday against the Sabres, we found out just how badly the Canucks need him.
In the first three games of the season, Travis Green leaned on his star blueliner to a shockingly high degree, with Hughes averaging a whopping 27 minutes per game. The peak of this strategy came on Saturday against the Red Wings, when Hughes sustained an injury during a game where he logged 29:09 in ice time.
To handle the loss of Hughes, Green opted to ice a veteran-heavy blue line against Buffalo, scratching Kyle Burroughs and adding Brad Hunt and Luke Schenn to the lineup. The result was a mess of defensive breakdowns and missed assignments, such as on Tage Thompson’s third-period tally where he got multiple wacks at a loose puck before Luke Schenn came to aid his goalie.
Thankfully for the Canucks, Hughes’ injury didn’t keep him out of the lineup last night against Chicago, where he played a more reasonable 22:06 and nabbed an assist on a Tanner Pearson goal. But the sudden drop in defensive quality without him was unmistakable, and with Travis Hamonic’s return nowhere on the horizon, Vancouver might want to consider searching for defensive help outside the organization to give Hughes some relief from a monstrous workload.

Thatcher Demko’s picking up where he left off

In his first year as the Canucks’ number one netminder, Thatcher Demko got off to a slow start but played incredibly down the stretch and might’ve been in the Vezina conversation had a COVID outbreak not killed his momentum.
This season, Demko has started hot right out of the gate.
According to NHL Stats Demko is tied with the Islanders’ Ilya Sorokin for most shots faced with 122, coming out of that barrage with a save percentage of .922. For comparison, Sorokin’s save percentage sits at just .902.
With the number of question marks on the Vancouver blueline, Demko’s importance is at an all-time high, and so far he’s lived up to the challenge. In their shootout win against the Flyers and OT loss to Edmonton, Demko was a massive reason they walked away with three out of a possible four points. If Jaroslav Halak is able to find his footing and give the coaching staff more chances to rest Demko than Braden Holtby did last year, it could prove crucial in how far this team can climb up the standings.

The Canucks’ power play has been in a state of flux since Newell Brown was let go in the offseason and replaced by former Sedin linemate Jason King. But their stacked special teams unit has faced a lot of the same problems from season’s past, with players hesitant to shoot the puck and getting caught telegraphing passes by penalty killers.
So far Vancouver’s power play has scored just four times on 19 opportunities, putting them 14th in the league on the man advantage. For context, prior to their respective Thursday night games the actively tanking Arizona Coyotes had scored twice in 10 chances, giving them the exact same 20% success rate as the Canucks.
The Canucks got back on track last night with Brock Boeser’s first goal coming on the power play, but Tuesday’s game against Buffalo was where the alarms really started going off. The Canucks went zero for three on the man advantage against the Sabres, but most concerning was how badly they struggled to sustain pressure in the offensive zone.
With Hughes on the shelf, Travis Green tapped Oliver Ekman-Larsson to fully take over as floor general, and the results were… underwhelming, to say the least. And there’s no better example of that than their first man-advantage of the game on Tuesday.
After the Sabres won the initial defensive zone draw and forced the Canucks to start from their own end, OEL shoots a corner dump-in for Elias Pettersson to track down. But two Sabres converge on him before the second nearest Canuck, Bo Horvat, can make it over to help.

On attempt #2, J.T. Miller tries to circle the net under pressure and ring the puck around the boards to Brock Boeser. But Anders Bjork reads it early and quickly snuffs out the play.

On their third and final try, Boeser himself can’t control the zone entry and the Sabres swiftly steal the puck and throw it back to Demko.

With all the scoring weapons at their disposal, the Canucks could have one of the best power plays in the league. If Jason King can work them out of their rigid current man advantage playbook and into one with a bit more unpredictability, the results could be game-changing.

The penalty kill needs a makeover

If you thought the power play was struggling, the penalty kill’s issues are a whole other ballgame.
Last night’s outing was an improvement for the Canucks shorthanded unit, killing off three of Chicago’s four power play chances. But their full success rate sits at just 71.4 percent, putting them 27th in the entire league.
Much like their woes with the man advantage, the Canucks penalty killing issues stem from stagnation in the zone and the team’s current lack of speed in their depth players. Where most teams try to stay aggressive on the puck carrier to try and force a bad pass, Vancouver’s penalty killers are usually rooted in the box formation to prevent any shots at Demko from the high slot.
But this often comes at the cost of opponents moving the pucks around the perimeter with little disruption, and opens up lanes for cross-ice passes if someone breaks from formation, such as on Alex DeBrincat’s goal yesterday. A healthy Tyler Motte might help mitigate some of the issues plaguing the PK once he returns, particularly with his foot speed, but for now the Canucks need to find someone else who can fill his sorely missed role.
In the cases of both special teams units, the key is playing more fluidly. If the Canucks can keep teams guessing on the power play by switching spots, taking more quick snapshots and trying to force the defense to collapse in around their goalie, they’ll have a lot more success at finding the back of the net. Similarly, giving a few quicker players shorthanded opportunities and using them to play more aggressively could breathe new life into Vancouver’s penalty kill.
Uncategorized
Recent articles from Lachlan Irvine