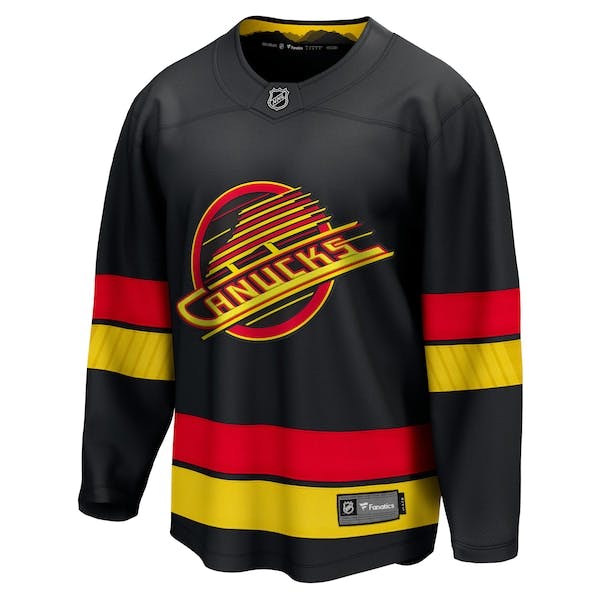 By Lachlan Irvine
18 days ago
After months of rumours and potential hints, we appear to have our first official look at the Canucks’ new Black Skate jersey, thanks to a cached listing on the NHL’s international shop site.
The listing features a Fanatics version made exclusively for retail, as opposed to the authentic Adidas versions worn on the ice by the players, and shows off a number of potential changes from the throwback version the Canucks wore across the previous three seasons.
The most noticeable change on the jersey is the complete lack of white. Most noticeably, the space behind the ‘CANUCKS’ lettering in the skate blade has been changed to black to blend in with the jersey, and the speed lines around the skate have also been changed to red and yellow.
The striping on the uniform has also changed, featuring large red and yellow lines similar to the green ones used on the Canucks’ last alternate jersey. The yellow bands on the arms also have diagonal lines making a ‘V’ shape, which could be an homage to the Canucks’ original jerseys from 1970 to 1972.
The changes on this leaked jersey line up with an earlier report on Twitter by NHL jersey site icethetics, who’d heard information that the Skate jersey would be a redesign from the throwback uniforms seen in various games since 2019.
The leaked jersey is the latest in a long list of evidence teasing the potential return of the Flying Skate to the Canucks’ jersey rotation. Back in October Canucks writer Trent Lieth wrote a thread highlighting a number of Flying Skate related easter eggs in the Canucks’ pregame video, and earlier this month a plane was spotted flying around Vancouver with a ‘FREE THE SKATE’ banner.
The next opportunity for the Canucks to reveal a new uniform on home ice won’t be until January 18, when they host the Tampa Bay Lightning in the first match of a four-game homestand.
What do you think of the Canucks’ potential new jersey? Tell us in the comments below!
News
Recent articles from Lachlan Irvine