THE FARMIES™ Post-Game: The Abbotsford Canucks pull a Vancouver Canucks in season opener 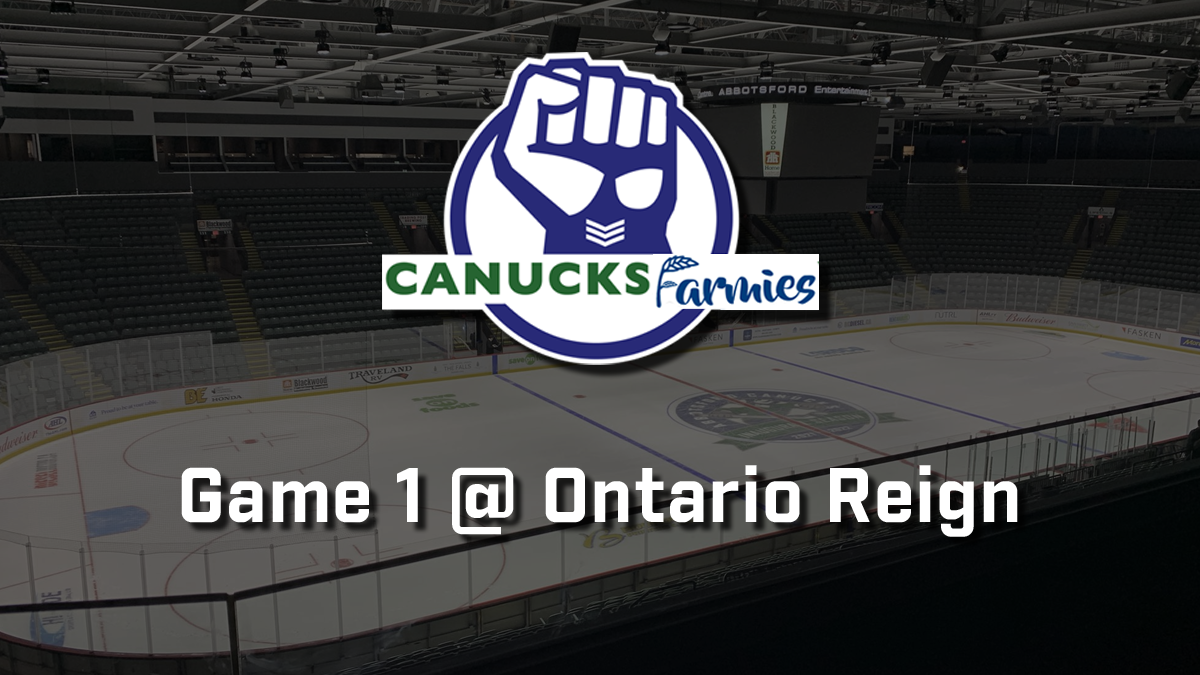 By Cody Severtson
1 month ago
You wanted it, folks!
You begged them to play the kids!
Well, buckle in because there will be plenty of nights like tonight throughout this season!
Spoiler warning, the ‘Baby Canucks’ pulled a ‘Middle-aged Canucks’ and started strong, then immediately collapsed on themselves like a dying star.
Let’s get into the fun!

Raising the most eyebrows was the promotion of Tristen Nielsen to the first line alongside Justin Dowling and Will Lockwood. Nielsen was the standout player during the Penticton Young Stars tournament after a disappointing rookie campaign that saw him miss nearly twenty games as a healthy scratch. After the tournament, Abbotsford GM Ryan Johnson cited the noticeable improvements to Nielsen’s skating and posited his belief in his ability to take a significant step this season.
The real fans know how Nielsen earned this early promotion:
If you know?
You know.
Healthy Scratches
DiPietro sat the season opener as the healthy scratch. The scratch should come as no surprise. This past offseason, DiPietro’s camp sought permission to seek a trade elsewhere from the Canucks. Combine the trade request with Patrik Allvin’s comments about not wanting to have three goalies in Abbotsford and Silovs’ impressive training camp, and it’s clear why he’s drawn the short stick on opening night.

Hirano drew blood early with an excellent chip and chase effort into the offensive zone that drew a penalty against Ontario’s Cameron Gaunce.

The early Abbotsford goal did not deter the Reign. Alan Quine, the unfortunate recipient of a Brady Keeper wrist-shot to the shins, picked up the blocked shot to race into the Canucks’ zone. While Keeper did admirably to try and box Quine out, a drop pass to the trailing Taylor Ward resulted in an easy game-tying goal for Ontario.
GOAL – 1-1 TIE
Alan Quine from Taylor Ward

The goal itself was, as they say, one that Delia would want back. Delia had ample time to set up for Quine’s shot. Instead, letting in a weak slapshot through his five-hole.
Fortunately, Phoenix Copley would match Delia’s ugly goal, tit for tat, with a display of reverse post-integration that would make David Quadrelli sick.
GOAL – 2-1 Abbotsford Canucks
Arshdeep Bains from Linus Karlsson and John Stevens

It was a beautiful goal for local product Arshdeep Bains’ first as a Canuck. Linus Karlsson started the sequence with a dump-in to the half-wall that Bains picked up under pressure. The sequence was incredibly slick, as Bains fought the initial pressure to return the puck to Karlsson behind Copley’s net. Then, Karlsson outdid his first primary assist of the game with a filthy pass to Bains in the slot for the one-timer goal.
Like Nielsen, Bains impressed at the Penticton Young Stars tournament with his impressive hockey IQ, two-way commitment, and hands. His hands were on full display with the go-ahead goal. Look at the stick lift he pulls off immediately before securing the bag!

Newly christened captain of the Abbotsford Canucks, Chase Wouters, put the Farm in trouble after tripping Akil Thomas. One of the team’s key penalty-killing forwards, it was not a great penalty to take after Bains’ go-ahead goal.
PK: Stevens, Keeper, Wolanin, Gatcomb
Delia’s night continued on the wrong foot after failing to track one of the slower cross-ice feeds you’ll ever see. To be fair to Delia, the Canucks’ penalty killers were caught cheating too heavily to one side, leaving Samuel Fagemo wide open at the circle. But for a cross-ice pass that slow, there are zero reasons for him not to be set for the shot.
Power play goal: 2-2 Tie
Samuel Fagemo from T.J. Tynan and Jordan Spence

The power play tally generated significant momentum for the Reign. Not long after Fagemo’s game-tying goal, the Reign struck again. This time against a dog-tired Canucks fourth line.
Daryl Keeping favourite, Helge Grans, earned the Reign their first lead of the evening with a seeing-eye wrister from the point.
GOAL: 3-2 Ontario Reign
Helge Grans from Akil Thomas and Jacob Doty

The Reign started pouncing after their go-ahead goal. By the end of the first period, they had outshot the Canucks sixteen to seven.
The Canucks weren’t completely without their looks. Will Lockwood generated one of their best with a slick dangle through the high slot for a shot on Copley.

Unfortunately, that would stand as the team’s last recorded shot on net for the remainder of the opening frame.

Brady Keeper put in some work to increase his DAWG rating on the penalty kill by drawing coincidental roughing minors against Rasmus Kupari. Unfortunately, Wolanin took a cross-checking penalty on the same sequence, giving the Reign an extended 5-on-3 power play opportunity.
During the extended 5-on-3, the Canucks kept the Reign off the shot chart. With one shot off the crossbar being the only offence the Reign could muster on the extended man-advantage.
After five goals in the first seven minutes, the Reign’s output continued, but the pace of the game had slowed considerably.

To start the second period, the Canucks were again on the backfoot against the smothering Reign cycle.

Vincent Arseneau played hero early into the frame with a fantastic stick lift on Jordan Spence to prevent a sure tap-in goal. Through the first five minutes, it was the Canucks’ defensive play that stood out.
While not looking fleet-of-foot, Brady Keeper looked cool as a cucumber while defending two odd-man rushes. For the second break-up, Keeper adeptly picked up his poke-check and skated the puck to centre ice for the safe dump-and-change.

In a period lacking significant offensive pop from the Canucks’ forwards, smart little plays like this stood out.
Yushiroh Hirano nearly tied the game at three after brilliantly picking off a pass inside the Reign’s d-zone. Excellent vision to pick off the pass and great moves to cut toward the net for the shot attempt.

Delia had been struggling all night with his rebound control and the poor reaction time on Spence’s shot through traffic gave Lias Andersson an easy tap-in for the two-goal lead.
Fan favourite Vincent Arseneau sought to double down on his brilliant defensive play. Unfortunately, he took a painfully obvious tripping penalty to hand the Reign their fifth power play of the game.

I loved the full-body sell-out for the shot block, but the extra hook on Jacob Moverare’s ankles was rather unnecessary.
Arseneau’s penalty did give fans a look at a more conventional penalty-killing group, with Chase Wouters and John Stevens as the first-out forward pair. The two combined to generate a dangerous shorthanded scoring chance, but the new Captain bobbled the puck at the last minute during his attack.

After Wouters and Stevens’ turn on the PK came Lockwood and Karlsson, who generated another shorthanded chance for Abbotsford!

The Canucks’ infusion of youth on the penalty kill paid off, with the Canucks generating as many shots on goal as the Reign’s man-advantage.
Unfortunately, the momentum generated by the stellar PK was not due to last.
GOAL – 5-2 Ontario Reign
T.J. Tynan from no one

Insert your Will Ferrell “welcome to the bleeping show” memes here after reigning AHL MVP T.J. Tynan picked the pocket of newcomer Arshdeep Bains before ripping a wrist shot over the glove of Delia to give the Reign a three-goal lead.
After two periods, the Reign’s run of dominance resulted in a shot advantage of thirty-five to twenty, culminating in one of the filthiest goals by a defenceman since Brogan Rafferty was a thing.
GOAL: 6-2 Ontario Reign
Tobias Bjornfot from Lias Andersson

In game 1, defenceman Tobias Bjornfot may have already scored Ontario’s Goal of the Year to give the Reign a four-goal lead. After splitting through John Stevens and Linus Karlsson, Bjornfot threw down a laundry list of dekes, drags, and dangles to evade Bains and Jett Woo for a backhander and follow-up goal past Delia.
Much noise was made in the market about Woo’s extended look during Vancouver’s preseason. However, he failed to show anything during Abbotsford’s sophomore season opener that would justify the look.

To start the final frame, Linus Karlsson showed off some of his puck-handling skills en route to setting up John Stevens for a one-timer.

Karlsson was on the ice for two of the Reign’s second-period goals, but he had a strong debut performance. Throughout the game, Karlsson was evading checks, battling hard along the boards for loose pucks, and setting up his linemates for golden scoring chances.
Early into the third period, Vinny Arseneau left the game after engaging in a bizarre bru-ha-ha with Ontario’s Jacob Doty. The two were battling hard in the Reign’s zone before Doty dropped the gloves to land several shots on the unexpecting Arseneau as he completed a line change.
The extracurriculars continued throughout the period, with Keeper taking a second roughing penalty against Austin Wagner.

The Canucks spent some time in the offensive zone, but their shots on net were consistently ineffective and non-threatening.

This sequence pretty well sums up the Abbotsford Canucks’ performance after the opening five minutes.
Yushiroh Hirano didn’t see too much action during the third period. However, when he was on the ice, he drew a penalty against Jacob Moverare at the halfway mark of the period, his second night.
PP: Stevens, Karlsson, Regush, Wolanin, Dowling
For the first time in the period, the Farm managed to generate sustained pressure in the offensive zone. Unfortunately, after four shots on Copley, an errant no-look pass from Karlsson resulted in a loss of zone time. Effectively ending the Canucks’ power play.
PP2: Lockwood, Klimovich, Nielsen Bains, Wolanin (double-shifted)

The second power play unit barely saw any ice during the Farm’s debut, with the only noteworthy events being Danila Klimovich’s multiple reckless hits.
The first was a stand-up high-elbow check on Akil Thomas in the neutral zone that prompted a zone entry for Abbotsford.

The second was a reckless check from behind on T.J. Tynan that sent the Reign forward headfirst into the boards.
Quite appropriately, Klimovich was tossed from the game, handing the Reign a five-minute power play.
PK: Lockwood, Karlsson, Woo, Brisebois
The Reign’s power play was utterly dominant, dominating the Canucks’ PK with their cycle.
Power play Goal: 7-2 Ontario Reign

On the field-goal point, the Reign held the Canucks’ PK unit inside their d-zone for fifty seconds before finding the back of the net with Akil Thomas’ one-timer.
It was rough.
The Reign even played the Monday Night Football theme song after scoring their seventh.
With six minutes left in the period, the Canucks pulled Delia mercifully from the crease and placed Arturs Silovs between the pipes in relief. Silovs’ looked sharp between the pipes through the remainder of Klimovich’s five-minute major.
The Farm spent most of the period working on their hits/60.

In the final minute of the period, Silovs’ gave up the Reign’s eighth goal on just his third shot faced.
Scoresheet
Ontario Reign defeat the Abbotsford Canucks: 8-2

The Canucks look to clean the slate as they take on the Bakersfield Condors tomorrow at 7 PM PST.
Editorials
Recent articles from Cody Severtson