Examining the Canucks’ past head to head record against each Canadian Division team: Winnipeg Jets 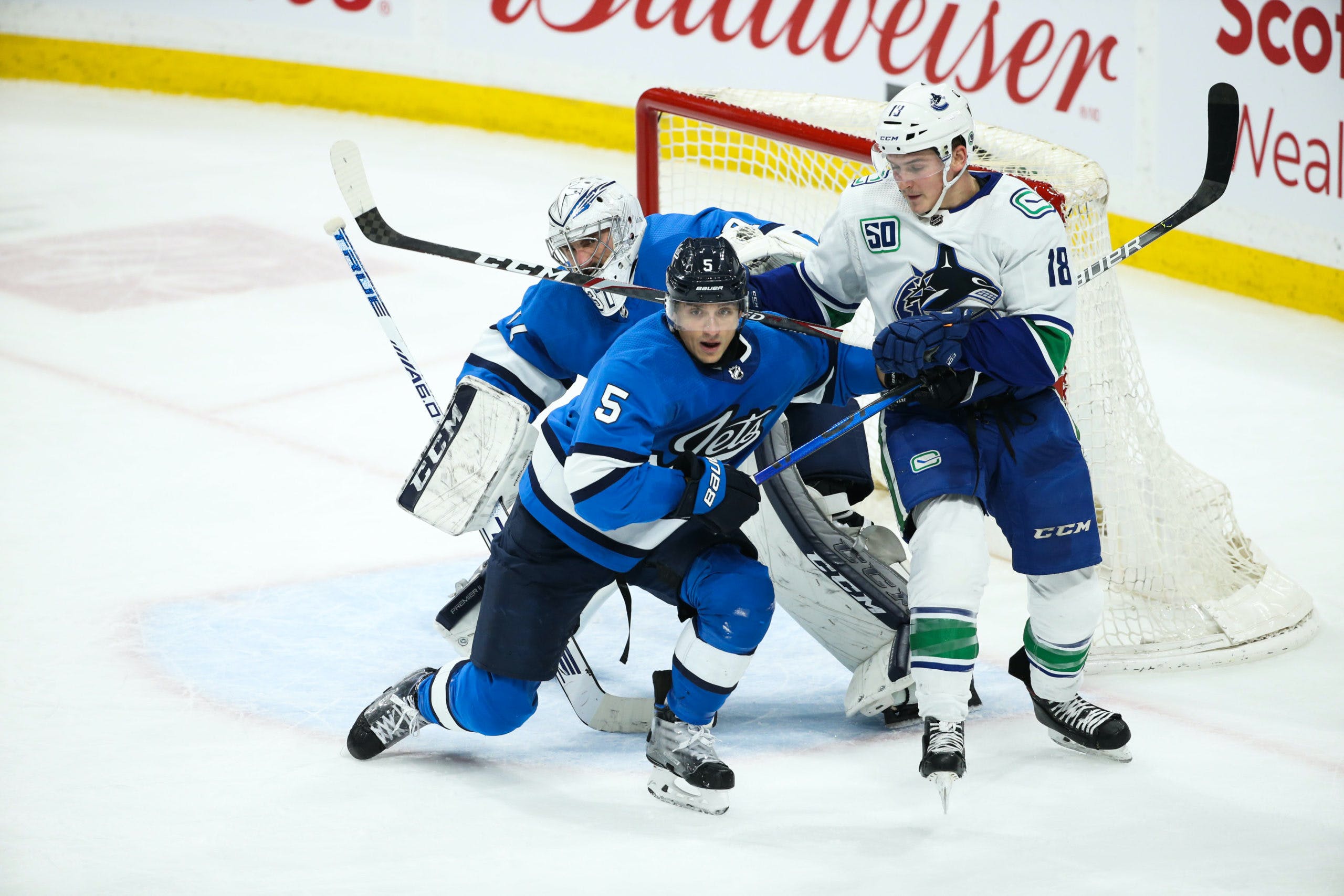 By Jason Jhutti
2 years ago
Superman has kryptonite, and the Vancouver Canucks have the Winnipeg Jets.
The Jets arrived in the Edmonton bubble with hopes of avenging last season’s early exit at the hands of the eventual Stanley Cup champion St. Louis Blues and return to the Western Conference final. Well, they didn’t make it past the play-in round and have found themselves in murky water as of late. The defence at times looks shaky, but they do have the reigning Vezina Trophy winner Connor Hellebuyck to help hide those problems.
The heavy, hard-hitting Winnipeg Jets’ defence is nowhere near what it was a few years back. Yet the Canucks still have not mustered up a single win in the past three seasons against the Jets.  Since the Jets landed in Winnipeg, the Canucks have just six wins under against them.
Last season the Canucks lost 4-1 and 4-0, both in Winnipeg, though one of those was on the second night of a back-to-back. Regardless, it seems the Canucks have a rather difficult time breaking down the Jets, especially with a .00% win percentage in the last three years.

Nothing has gone right throughout the last three seasons for the Canucks, and it shows in special teams and the win column. The last win against the Jets came back on December 20th, 2016, when Jayson Megna, Michael Chaput and Nikita Tryamkin were in the lineup. Now with a much-improved lineup, the Canucks will look to flip the script and start a run of their own against the Jets.
For that run to happen, the Canucks need to improve on special teams. Only three other teams have a lower power play percentage against the Jets in the past three seasons: the Anaheim Ducks, New Jersey Devils, and the Washington Capitals. Even with Elias Pettersson’s arrival, the power play has dipped from an awful 8.7% to 7.1%, and last season the Canucks went zero for six.
The penalty kill hasn’t been great either.
The Jets generate most of their shots from the middle of the blue line, front of the net, and left side circle when on the man-advantage. The Canucks PKers will need to work tirelessly to limit those chances.
As for the five on five play, let’s face it, averaging one goal per game won’t cut it against a team that still plays hard defence.

For years the Jets have been the “blueprint” on how to build a team through the draft. Getting praises from all around the league, it looked as if the Jets were on the cusp of a cup. In the past three years, the Jets have been at the top five of the league in wins, goals for, and power play.
However, heading into this season, the Jets are now considered a bubble team and will need to rely on Vezina calibre goaltending from Hellebuyck once again to help guide them into the postseason.

A roster that has seen a lot of turnover as of late, especially on the backend, the Jets’ top three returning players will be a thorn in the side of each Canadian team this season. Mark Scheifele is one of the best two-way centres in the league and has become a superstar on the team.
The line of Scheifele and Kyle Connor played a fair share together last season. Travis Green has used the lotto line in the past four games to counter react against Winnipeg’s top line at even strength. Green would probably want to shy away from this matchup when at home to let the Canucks’ most dangerous line get cooking.

What’s new with the Jets

Paul Stastny returns to the Jets after his stint in Vegas. The Jets now have centre depth, which was lacking since Stastny left.
The bulk of the roster will remain intact after a few years of departures. However, with an in-season trade, the Jets bolstered their centre depth by adding Pierre Luc-Dubois who wanted out of Columbus in exchange for former 40 goal-scorer Patrik Laine who wanted out of Winnipeg.

What to expect from the Jets

The Jets play loud, they forecheck well and close the gap quickly. They don’t give much space in the neutral zone for the opposition and tend to get their shots at the point and in and around the slot.
Overall, seeing the Jets nine times this season, the curse will surely be lifted. Another year in which Quinn Hughes and Pettersson will improve could simply be too much to handle for the Winnipeg Jets.
Season series prediction: 4-4-1
Uncategorized
Recent articles from Jason Jhutti