Examining the Canucks’ past head to head record against each Canadian Division team: Calgary Flames 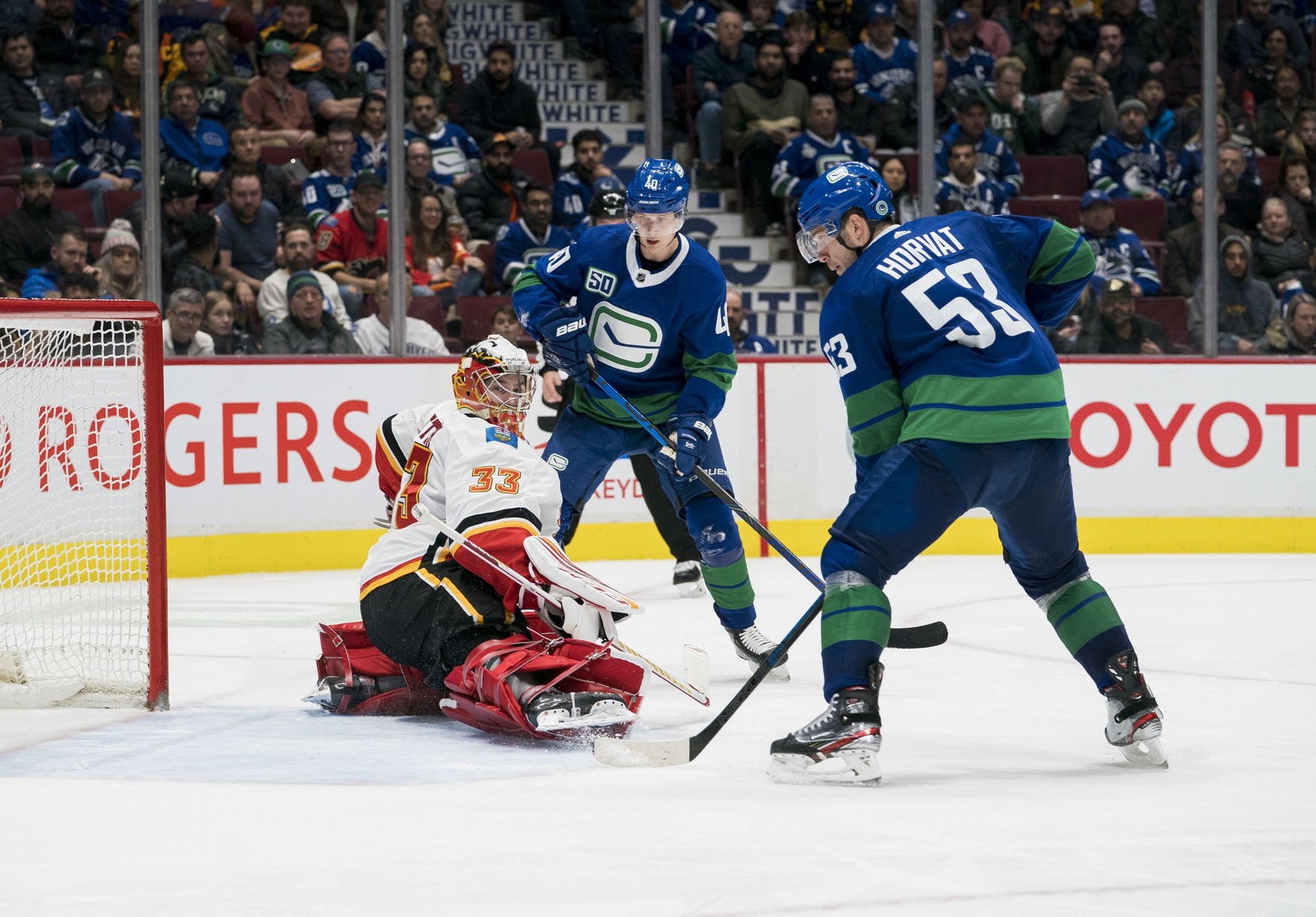 By Jason Jhutti
2 years ago
The Calgary Canucks — I mean Flames — went fishing in Vancouver’s backyard this offseason, and why wouldn’t they? We have excellent seafood and apparently hockey players too.
The Flames have overhauled their goaltending and added other pieces along the way. After beating the Winnipeg Jets in the play-in round, the Flames bubble was burst by the Dallas Stars in the first round of the playoffs. However, this season the Flames will look to win their first playoff series since beating the Canucks back in 2015.
Last season, the two teams faced each other three times. After splitting the first two games, the Flames took the rubber match. With a winning percentage of .333, the two losses had a combined score of 9-2 while the Canucks lone victory was 5-2.

This year and for the foreseeable future, games against the Flames will be just a little extra special for Canucks fans. With long-time Canucks Jacob Markstrom and Chris Tanev on the other side, the heat on this rivalry just got turned up a notch.
Even with Markstrom in net last season, the Canucks had a higher goal-against (GA) average against the Flames. The Canucks need to tighten it up on defence and help either Braden Holtby or Thatcher Demko a bit more.

The Flames have had more of an enjoyable experience than the Canucks over the past three seasons. After a run that saw them miss the playoffs before getting eliminated in the first round the following year, the Flames reached the bubble where they won the play-in round, but still have yet to win a legitimate best of 16 playoff round in the past three years.
Both teams have been close in standings when it comes to special teams.
The Canucks special teams have been a mixed bag in the past three seasons. The power play has measured in the top half of the league, while on the penalty kill, they rank in the bottom half. Ideally, the PK would run at an efficiency rate in the mid to high 80s, and the Canucks bounce back after a dip in form last season in which the pk was 80.8, down 1.3%

Matthew Tkachuk is the heartbeat for the Calgary Flames. Like his father, Tkachuk is hard to play against and gets under the opposition’s skin. Since entering the league in 2016-2017, Tkachuk leads all Flames in scoring against the Canucks with 17 points in 17 games. Over the past four games, Travis Green has deployed Brock Boeser and Elias Pettersson to shut down Tkachuk. Boeser and Pettersson have lined up against Tkachuk 31% of the time at even-strength, and in that stretch, Tkachuk has managed one goal and two secondary assists.
As for Elias Lindholm, he lead the Flames in goals last season with 29. He and Johnny Gaudreau have found chemistry despite Gaudreau’s lowest points total in his career. However, Gaudreau has enjoyed himself against the team he scored his first-ever goal against over the past three seasons. In 12 games against the Canucks, Gaudreau has 14 points, four goals and ten assists. With Boeser and Pettersson occupied with Tkachuk, Green sent Bo Horvat and Tanner Pearson to help contain Lindholm and Gaudreau in the past four games against each other.

What’s new with the Flames

In total, four former Canucks will be wearing the Flames sweater this season. In the offseason, the big-ticket item was Jacob Markstrom, and the Flames managed to lock him up on a six by six contract. He, in no doubt, will be the number one stater for the team. A ten-year vet, Chris Tanev joined the Canucks in the 2010-2011 season, and became the “dad” of the group last season. Tanev inked a four year deal this offseason with the Flames to join Markstrom. The trifecta was adding Louis Domingue (though he is on waivers now), but if that wasn’t enough for Canucks fans to stomach, the Flames said, “hold my beer and watch his,” and added Josh Leivo at a very reasonable one year deal.
Don’t worry Canucks fans; at least we took Travis Hamonic from them, and with the addition of Nate Schmidt, that is definitely an upgrade on Tanev and Troy Stecher, wouldn’t you agree?

What to expect from the Flames

Without even playing a game for the franchise, the Flames goaltending situation has gotten much better with the arrival of Markstrom. Their top three lines have found chemistry in the second half of the last season and will look to continue that growth into this season.
With a young d-core — aside from Mark Giordano and Chris Tanev — T.J Bodie’s loss in the offseason will be a factor heading into the season, but Tanev will help ease that pain. However, a lack of experience could benefit the highly-skilled Canucks forwards in the offensive zone.
With a power play that generates offence from the right side and the slot and a penalty kill that uses a box formation (finished eighth in the NHL), the Flames special teams have performed fairly well under head coach Geoff Ward. Ward likes his players to block shots, have grit and play with speed.
Seeing each other ten times this season, the Canucks and Flames will reacquaint in the first few days of the season. Both teams will be battling for a playoff spot, and seeing each other ten times, it could come down to the final meetings against each other to decide who gets a postseason berth.
Both teams play a style that’s close to each other, and it shows with the series as close as it is. Games against the Flames are always one to mark on the calendar, and this year they will be even more must-see with Markstrom and Tanev on the other side.
Series prediction: 6-4-0 Canucks
Uncategorized
Recent articles from Jason Jhutti