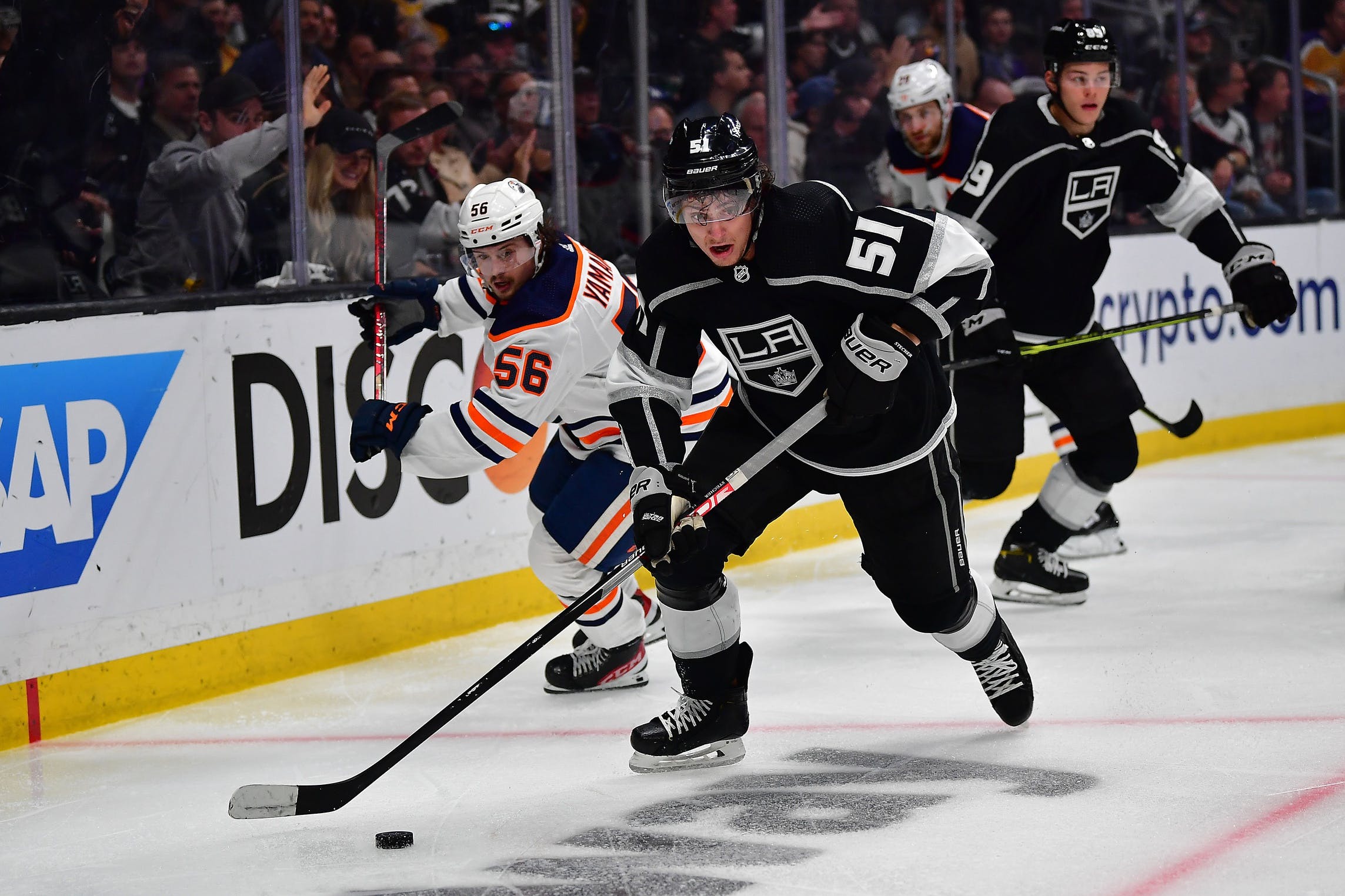 By Stephan Roget
8 months ago
The summer of change continues.
As the 2022 Stanley Cup Playoffs drag on in the background, the Vancouver Canucks and their brand-new front office have already been busy, making changes to the scouting department and the coaching staff. But off-ice shakeups are only part of the plan for this offseason, and roster movement is on the way shortly.
There’s no doubt that there will be some transactions made up front, with star forwards like J.T. Miller, Conor Garland, and Brock Boeser finding themselves in trade rumours.
It’s the blue line, however, where the greatest change will likely be felt, as POHO Jim Rutherford and GM Patrik Allvin attempt to reconstruct a unit that may have overperformed in 2021/22, but still looks woefully inadequate on paper heading into 2022/23.
Quinn Hughes remains in place as the de facto leading man. The Canucks will attempt to move one or both of Tyler Myers and Oliver Ekman-Larsson for the sake of cap space, with Myers the far more likely of the two to go. Luke Schenn sticks around as valuable depth, and it’s pretty much an open field beyond that.
Ideally, some young blue-chip D prospects come back in return for assets like Miller, Garland, and/or Boeser, and ideally those prospects are able to join the Canucks’ blue line immediately. But even if that is the case, some additional depth will be necessary — and Rutherford has already mentioned that he wouldn’t mind adding another veteran or two to the mix if the price was right.
In anticipation of that, we’ve scrutinized the upcoming UFA market — where the price is rarely right — to see if there are any particularly good fits.
Really, we’re looking for one of two types of UFA defender:
We’ve sorted the results into some convenient budgetary categories below.

The “Forget It, Way Too Expensive” Tier

Klingberg is the cream of the UFA blue line crop as a big, two-way defender who can skate well enough for the top pairing and play the game any way you want it. He’s also still on the right side of 30. Unfortunately, for all those reasons — and in conjunction with the fact that he’s been drastically underpaid for most of his career — Klingberg is going to be getting a major paycheque this offseason. Committing that much term and salary to an aging vet is not a good fit for the Canucks.

If the Canucks are looking for sandpaper on the blue line, they can’t do much better than the appropriately-named Manson. Again, though, Manson has all those same attributes that tend to inspire a bidding war on the open UFA market, and he’ll almost certainly be walking away with a regrettable contract, so the Canucks should steer clear.

Even at 35, Letang might be the single best defender available as a UFA, and he’s still more than capable of holding down top pairing minutes. If the future HHOFer leaves Pittsburgh, however, it’ll be for one last major contract, and that’s not something the Canucks can afford right now. Maybe Letang’s history with Rutherford earns the Canucks a discount, but probably not.

The “Probably Still Too Expensive” Tier

The Panthers paid a stupid amount for Chiarot at the Trade Deadline, and look where it got them. The large but plodding Chiarot was probably their worst defender as they got swept in the second round by the Tampa Bay Lightning. Still, UFA suitors will look right past that to Chiarot’s run to the 2021 finals, and they’ll have their chequebooks open when he hits the open market. The Canucks would be wise to steer clear.

If the Canucks were to add a LHD this offseason, Zadorov has everything they’d want: size, speed, physicality, passable puck-moving skills. For all those reasons, and his role on a top-tier Calgary blue line/career numbers this past season, Zadorov is going to get paid. He’s young enough to avoid his contract being immediately regrettable, but he’s also got a penchant for bad decisions and occasionally catastrophic coverage. Do the Canucks really want another Myers on the other side, and at a similar price?

The Canucks were once in hot pursuit of the BC-born Schultz, but he’s since gone on to have a lengthy career elsewhere. As he’s winding down, Schultz has settled into being a fairly reliable two-way threat, though his 2021/22 campaign was one of his poorest at both ends of the ice. He’s still better than most of what the Canucks currently have at RHD, and could be reasonably priced, but he’s also not really what Vancouver is looking for.

Rutta has been a part of two Stanley Cup blue lines running, and is now in his third straight Eastern Conference Final. On top of that, he played a full season for the first time in his career, and looked pretty darn effective while doing so. There’s reason to wonder whether Rutta is buoyed by the Tampa Bay blue line or held back, and whether he’d flourish or wilt in another system. There’s also reason to worry that his Stanley Cup experience leads to an overpayment this summer, but chances are good he’d be acquirable at around the same price as Tucker Poolman went for last offseason — with presumably better results.

Lyubushkin is big, he’s right-handed, he’s mean, and he hits like a truck. For those reasons, he’ll attract attention as a UFA, but that’s really all he brings to the table, and he’s probably a bottom-pairing defender on most NHL rosters. He reads as a recipe for an overpayment, and the Canucks should not be the team to make that overpayment — especially since they already have a better version of Lyubushkin in Luke Schenn. It’s not like Lyubushkin’s contract will blow the budget, but any contractual inefficiency should be avoided at this point.

If not for his advanced age, Cole might be the perfect pickup for the Canucks. He’s a leftie, but he’s played either side an equal-ish amount throughout his career — and what a career it’s been. Cole is hefty, physical, and a battler, with more than 100 playoff games to his name. He blocks shots, he kills penalties, and he’s passable offensively. As a long-term fit, he’s obviously not the answer, but he could be a versatile add that gets a lot of the little jobs done and provides valuable mentorship.

Let’s just say that Subban will be taking a bit of a pay-cut this offseason. His days of being an All-Star and taking home an all-star salary are clearly over, but his days as an effective NHL defender are not. Subban had a quiet bounceback campaign of sorts in New Jersey this year, stepping back into a second-pairing role and stepping forward into some of his best advanced stats in years. If he’s willing to chase a destination rather than a pay-day, he might find a home in Vancouver. He can still move the puck well, and the Canucks need that more than anything.

The Kings outperformed expectations this year, and so did many of their players, including Maatta. As a top-four option, he played against decent deployment and put up better than decent results, including a whopping 55.44% xG rate. Speaking of whopping, Maatta is certainly more sizeable than the Canucks’ other options on the left, even if he doesn’t always use it. He can exit his own zone and kill penalties, which are obviously desirable attributes.

You all knew this name was showing up. After a few years in exile, Stecher earned some attention for going PPG in the playoffs for the Kings, but he’s still going to be looking at a contract somewhere in the $1 million range when he hits UFA status this summer. If he weren’t so undersized, he’d be almost perfect; he skates well, shoots right, moves the puck semi-effectively, can play both special teams, and loves Vancouver. Maybe that’s perfect enough for a second stint in his hometown.

Hands up if you thought Stone was way older than 31. He’s been around for seemingly forever, and he’s still getting it done as a fill-in for the Pacific-winning Flames. Stone breaks even at even-strength, kills the odd penalty, and provides more offence than he gets credit for. As a 7th or 8th defender on the depth chart, he might make for a more multipurpose choice than, say, Brad Hunt.

Even at his advanced age, Braun has an NHL spot locked down. He played top-four minutes in Philadelphia all season long until a Trade Deadline transaction brought him to New York. For the Rangers, he’s slid down to the bottom pairing, but he’s also played in every playoff game thus far and posted fine results. He’s a bit of a jack-of-all-trades, but if the Canucks are hard up for RHD depth, they could do worse.

If the Canucks really want to add some sandpaper, they’d get a lot of it in Smith. While he’s a bottom pairing D on most teams, he’s got plenty of experience playing on the wing, and wherever he plays, he plays tough. Smith could be a left-handed Schenn at his very best, and a fourth line enforcer at worst. There’s a reason that the Hurricanes have dressed Smith for every single playoff game thus far, with most of his minutes coming on the blue line.

Sustr makes the list for being ginormous, for playing physical, and for being right-handed. He’s not an everyday defender on Anaheim, and he’s definitely not on most other teams, but if the Canucks want an extra depth option, they could definitely do…smaller.
Uncategorized
Recent articles from Stephan Roget