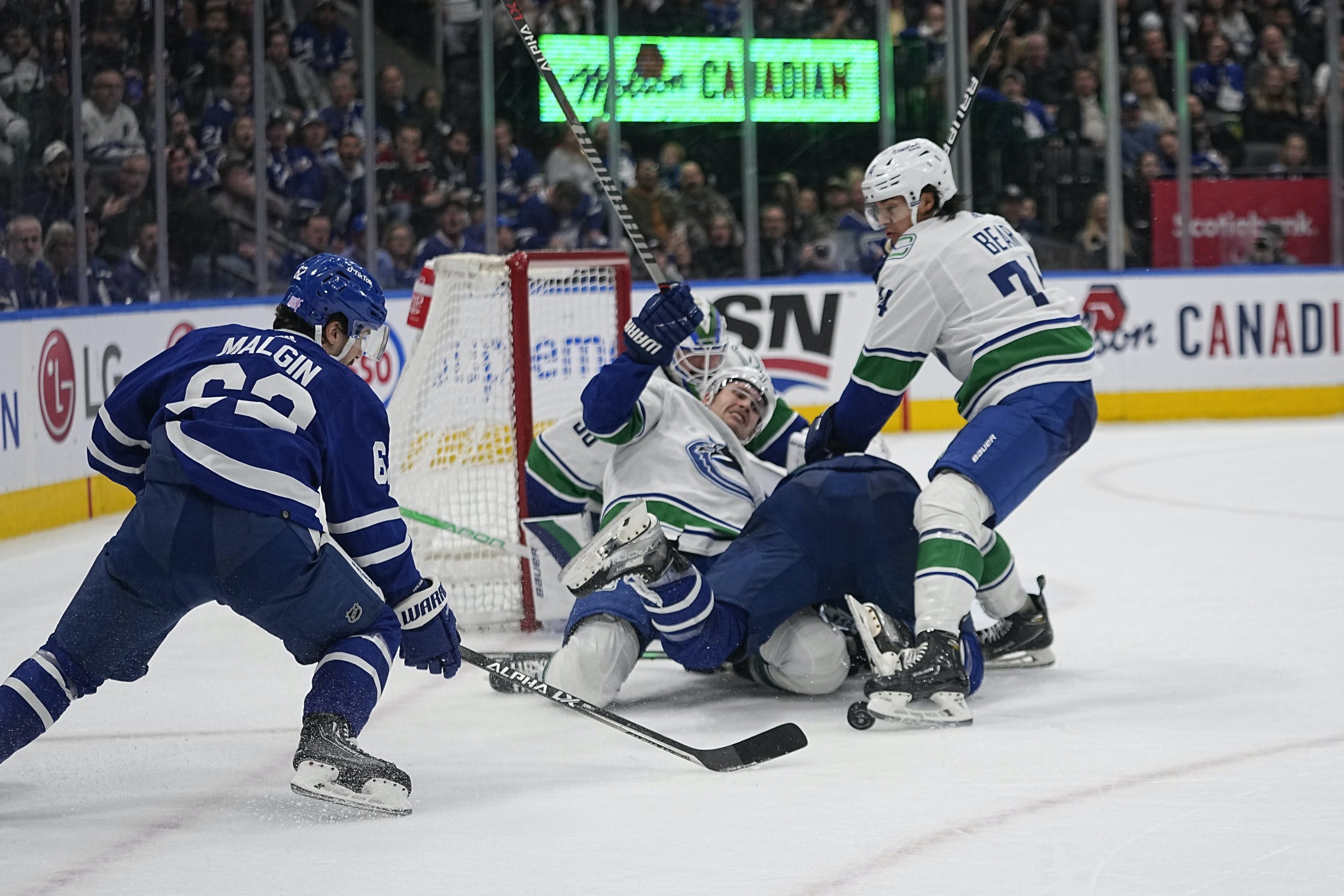 By Noah Strang
2 months ago
In October of this year, the Vancouver Canucks traded a 5th-round pick in the 2023 NHL Entry Draft to the Carolina Hurricanes for defenceman Ethan Bear and Lane Pederson. Bear, a 25-year-old right-handed defenceman, was the key component of the deal. While he had found some success early in his career with the Edmonton Oilers, he had fallen out of favour with the Hurricanes and wasn’t getting regular playing time.
Trading for Bear was a risk for the Canucks, although a small one considering the low acquisition cost. However, after only 13 games, he has already proven that he deserves to be considered in any discussions about the future of the team.
While Bear is far from the solution to the Canucks‘ defensive woes, he has impressed enough to be considered a 2nd or 3rd pairing right-handed defenceman for the future. While his numbers are solid, what’s been most impressive has been the details in his game. He has a great ability to control the puck and lead breakouts, something that the Canucks have been lacking out of their blueline.
As the Canucks answer big questions about their direction and begin to make changes, Bear should be strongly considered in any decisions. He’s been good enough at a key position that he can be considered an important complimentary player that can play a significant role in the team’s journey to a Stanley Cup.

Analyzing Bear’s performance with the Canucks

Through 13 games with the Canucks, Ethan Bear has recorded two goals and two assists. While these offensive numbers don’t jump off the page, one of the goals was a clutch third-period slap shot game-winner against the defending Stanley Cup Champions.
Bear’s advanced metrics aren’t the best as he’s rocking a 44.41 CF% and a 46.45 xG%, but no Canucks defenceman is doing great in these areas. In addition, the Canucks have been outscored 10-7 with him on the ice at 5-on-5, but he’s been hurt by a low on-ice shooting percentage. That number should go up and Bear’s on-ice stats will improve.
Beyond the boxscore, Bear has looked solid on the ice. While there have been some mistakes — he had a bad turnover on the Sharks’ third goal on Sunday night — his overall performance has been good. As mentioned above, he’s shown the ability to retrieve the puck from his own corner and get it to a Canucks forward, starting a break the other way.
He’s been a noticeable improvement on some of the Canucks’ right-handed journeyman defencemen options of the past few years. While he’s not a top-pairing superstar, Bear is a steady option that gives the Canucks a bit more stability at a position of need.

Where Bear fits in the team’s future plans

As a young NHL-caliber right-handed defenceman, Bear is a rare commodity for the Canucks. The struggle to find any legitimate talent at RHD has been an issue for the organization for some time. Adding Bear to the position group — while only having to give up a fifth-round pick to do so — has been one of the new regime’s best moves thus far.
Bear’s contract is up after this season at which point he will become a restricted free agent. If he keeps up this level of play, the Canucks will be looking to come to terms on a multi-year extension. With so much opportunity available in Vancouver, it feels like a good fit for both sides.
Bear currently makes $2.2 million. This isn’t a number that should jump drastically after this season. Jonas Siegenthaler is very close in age and has shown a lot more at the NHL level. Siegenthaler has spectacular defensive metrics and has managed to record 7 points through the first 22 games of this season. He recently inked a 5-year / $3.4 million AAV extension with the New Jersey Devils. While Bear won’t get that term, it gives a rough idea of a ceiling for a new deal.
The Canucks should feel very happy that they managed to get Bear into the organization for cheap. It was a tidy piece of business that has brought them a legitimate 2nd or 3rd pairing right-shot defenceman who should be part of the bigger picture for years to come.
Editorials
Recent articles from Noah Strang